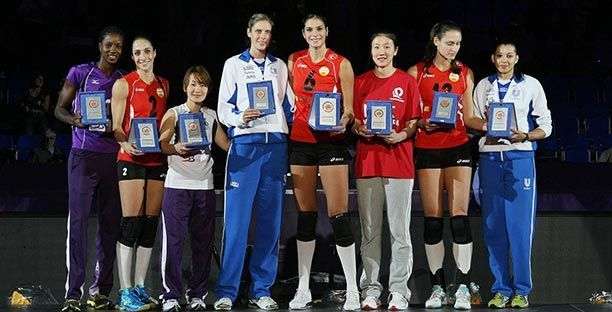 A few days ago we discussed the excellent performance by Yoandy Leal and Oreol Camejo, in the recently ended Men´s Volleyball Club World Championship. Undoubtedly, that is good news for Cuban volleyball followers. Today we have another surprise, but in the women’s division: one of our spectacular players, Kenia Carcasés seduced the audience with her indisputable high quality performance.
Six teams met at Zurich (Switzerland) to celebrate the seventh edition of the Women’s Volleyball Club World Championship, from October 9-13.
Present at the match were the current champions from FIVB regional confederations: Vakifbank Istanbul (Turkey) from Europe; Guangdong Evergrande (China) from Asia; the four-time African winner Kenya Prisons (Kenya); Unilever Volei (Brazil) e Iowa Ice (EUA), from South America and NORCECA respectively.
The last ticket was for the local club Volero Zurich, where Kenia has a membership, and where she had the opportunity to display her talent and keep Cuban volleyball present at the event. She did her best. Her statistics assured her a position at the Dream Team of the championship as she was chosen as best attack player.
Let’s take a look at her statistics. Her attack was very effective; she was the single player to record over 50 per cent (53.28). She was second scorer with 73 points and 11th among blocking leaders with an average of 0.43 per set.
Another interesting detail is that she was the higher scorer per match of the tournament. On October 10 she had no mercy against the Chinese Guangdong Evergrande, scoring 28 points and performing five effective blocks, one of the highest figures of the event in a match.
As a team, the Volero Zurich ended up fourth by falling 1-3 against the Guangdong in the clash for the bronze medal. The sets punctuation was (26-24, 25-21, 29-31, 25-21). In the match for the tittle the Vakifbank Istanbul girls swept in three partials with the Brazilian Unilever Volei, a selection coached by charismatic Bernardinho Resende.
Along with Kenia several female volley world stars were present at the Saalsporthalle sports center. It is worth mentioning Serbian attacker Jovana Brakosevic and italo-Argentinean Carolina Costagrande; whereas the Unilever captain was the exceptional Brazilian Fofao.
Up to present day, the seven World Volleyball Club Championships for women have had different champions. There are four nations whose representatives have got to the highest position: Turkey; Italy; Azerbaijan and the three-time champion, Brazil, including the previous version with the Sollys Nestlé.
The magic of Cuban volleyball keeps conquering spaces around the world and the women are not the exception. Although there is a sad contrast in this case: tens of their players collect individual victories in professional circuits, while the national selection is living its most fateful days. Reverting this situation should become an immediate goal; the great history of our spectacular players deserves it. We know many of them are willing to wear once again the four-letter uniform. Then, it is time to talk.