Leopoldo “the Helicopter”: nostalgia of the past 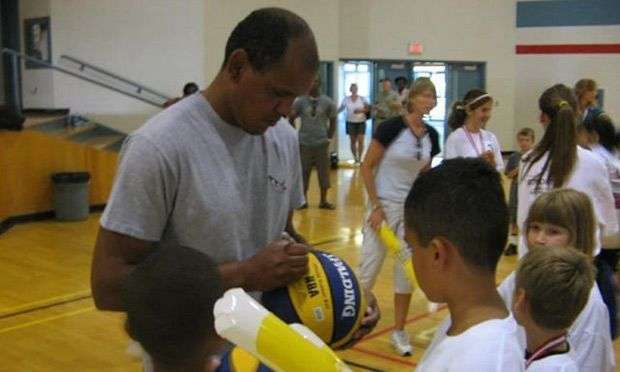 It has been almost twenty years and the memories of those magical nights in the Font arena remains intact. Times were hard, full of material shortages that were accompanied in many cases of deprivation of spirit. Luckily, there was the all-purpose arena, home to a team able to make us forget for a few hours the hard struggle of our daily lives. There was Capitalinos, the team leader of the Superior Basketball League, often triumphant, giving great games against relentless rivals that were eager to break this hegemony. There were those crowded bleachers enjoying a quality basketball, total dedication, love and hate.

Through facebook, OnCuba is reunited with one of the protagonists of the story: Leopoldo “the Helicopter” Vasquez, the same that made us quiver whenever, from the line of 6.25, was suspended in the air with a unique elegance, and gave us one of those three-pointers that seemed to stop the ball in time for a few seconds until you only hear the faint sound of its brush with the mesh, and then total ecstasy for the fans. From his adopted city for almost fifteen years Toronto, “the helicopter” willingly agreed to talk with us.

Surfing the Web in search of information we discovered that your first great sporting passion was baseball. I imagine in your dreams as a child you were wearing a cap and spikes.

The ball is our passion and every child dreams of wearing the uniform with the colors of our flag. My case was one more and felt a great admiration for Luis Giraldo Casanova, “Mr. Baseball”, as well as my uncle Victor Morejon, who at his best was center fielder in the Santiago de las Vegas team.

How did you arrive in basketball?

It all starts with a talent program on my primary school back in Santiago de las Vegas. I was accepted and the following year my sporting career started in the Pre-EIDE Celso Stakeman, but always with the idea of being a baseball player. It turns out that the end of the first day of school with the group I left with the baseball team for training and when they called the roll my name did not appear, although at the time I was included. The next day the teachers of basketball, Ronald and Natalia, came looking for me clarifying I was there for that sport. The change angered me, until after a conversation with my father; he made me see the beauty of basketball and I warmly finished going to practice, but with the passion of the ball always latent.

Special moments? During your first year as teen and youth?

This initial stage was very interesting. I remember I joined the team that won the game 13-14 category in Santiago. It was also special the 15-16 team led by Alberto Zabala, current women’s national coach. I dare say it was one of the best teams there has been in that category, we were a very complete team, balanced on offense and defense. We all left there for the provincial and some of us national ESPA. As a youth I enjoyed my time at the Cuba team under the direction of Peter Chapé, who always recognized and admired my work, someone I don’t forget. We participated in Cuba Cups, Friendship Youth Games and Pan American in that category.

Your debut in the senior category?
It was with the second team from the capital, Industriales and two years later I moved up to Ciudad Habana team. By the way in that first-class championship we had so bad a performance that we didn’t even classify to the next stage.

You belonged to that great Capitalinos team that won five consecutive titles in the late 90s. How did you live those years of triumph?

Capitalinos was the opportunity to become a top athlete and to reach the Cuba team. It also allowed us to change the image that existed on the capital teams that lacked character. With our game we exhibited the opposite. We revolutionized basketball here in many aspects of the game, we show for the fans of the country our love for the jersey, and we gave the fans full enjoyment many times in those trying times.

To the public you carried the image s of a cohesive team with a common interest and desire to play good basketball. What were the relations among you?

We had an amazing dynamic on the court, beginning to materialize from our guard Roberto Carlos, who facilitated each of us better performance. I think they recall for what we brought in and out of the court, but we were never strangers to common team problems. Often jealousy, envy and inappropriate comments led to lack of respect, a loss of values that left an unpleasant image in some players and our coach Miguelito Calderon.

What players do you remember from those years in a more special way?

As a player Roberto Carlos for his intelligence, expertise and serenity at all times. Amiel Vega, Ariel Ruedas and Leonardo Cuesta, all very supportive and we remain true friends today. From the rest of the island Leonardo “wonder” Perez and Lazaro Borrell, unique in his style, and Angel Oscar Caballero, the best example I’ve seen of hustling on a player on the court.

In those years playing the league was played which were almost always full furiously defending their teams. Where did you enjoy playing more, in the Font or Kid Chocolate? And outside the capital?

Playing to the fans capital was wonderful, especially in the Font. There all supported you and enjoyed your game and team performance. Now I honestly rather play in the “boiler of San Justo” at Guantanamo and in the Urgellés of Santiago. The audience was very demanding, all the time you were subjected to great pressure, ideal for measuring your ability to play and improve your performance.

The helicopter … how and when does it become an inseparable part of your career in the courts?

I remember that it was at the beginning of the top leagues, from a letter in the newspaper, referring to my physical attributes and my skills in the game, they finished comparing me to a helicopter. The nickname caught in the fans and always accompanied me on and off the field.

What meant to you to wear repeatedly the Cuba team shirt?

Representing Cuba at international events was a dream come true. The culmination of a journey filled with sacrifices, the best way to thank everyone who supported my career from the start.

Two three-pointers to remember with pleasure. One with Capitalinos and one in the Cuba team.

Better than the three-pointers I remember two occasions with great satisfaction that, during the season, I made 9 triples to Western and Central teams in the Kid Chocolate arena. With the national team in the World Cup 94, upon completion of a match against Australia, Andruw Gaze, great shooter of that team, congratulated me on my performance from the perimeter. That I really enjoyed.

Pan American Games in Winnipeg, 1999 … You pick a new path for your life. Hard decision?

After Winnipeg a new life began for me. It was one of the most profound and accepted decisions I ever made. I was provided an opportunity to find spiritual peace and the desire to live as a human being in all its glory. Difficult decision, but I knew my family, friends and fans in general would understand me.

You sought to continue your career in basketball. What options did you have?

In Canada the options relied heavily on the duration of the migration process. Also it depended on finding the right person to guide me. The lack of a national league to play professionally stopped me there, so I attended a college league with Durham College. On two occasions I was playing with my dear friend and brother Leonardo Cuesta in the Dominican circuit with teams Cocolos and Madre Vieja.

Except for the times Andres Guibert and Lazaro Borrell had, the NBA basketball circuit has been elusive to Cuban players. What reasons do you think motivated this?

I believe among other things is because of the absence of a strong national league where you start preparing, not having the opportunity to play outside the country, and access to U.S. colleges and universities that are the best school to reach that level.

What is your favorite team in the NBA?

I see a lot of NBA games, and sympathize with the New York Knicks. I also followed the Celtics when they had the “big three” (Garnett, Pierce and Rondo).

It is true that all those players you mentioned are favorites of many for their talent and expertise to defining games. I enjoy them, but I admired Grant Hill and Alonzo Mourning, since they knew how to overcome adversity that life got them in the way, and were an example of perseverance and dedication.

Many friends, when they learned of my purpose of achieving this interview were very happy with it. What do you say to all those people who enjoyed both your game and hustling in the court?

I never expected to reach so deep into the hearts of many basketball fans. Thus at every game I gave the best of me as an athlete and person. I’m very flattered to have contributed to brighten the day of many Cubans in those difficult times, and that out of games they believed in hope of a better tomorrow, for which you only had to fight and set goals to meet .

Try one last triple. If you went back to have the opportunity to choose: Basketball Player, Baseball Player or Historian?

Being a basketball player was a beautiful page of my life, but if God gives me another chance to try my luck I will do it in baseball. I’d love to hit a homerun in the Latino and make the fans vibrate and that among them there were a special being: Armandito the Dyer. Maybe I decided to study history and as a teacher help educate generations worthy in their values and principles.