Summary of the performance of the Cubans and other highlights in the Major Leagues this week. 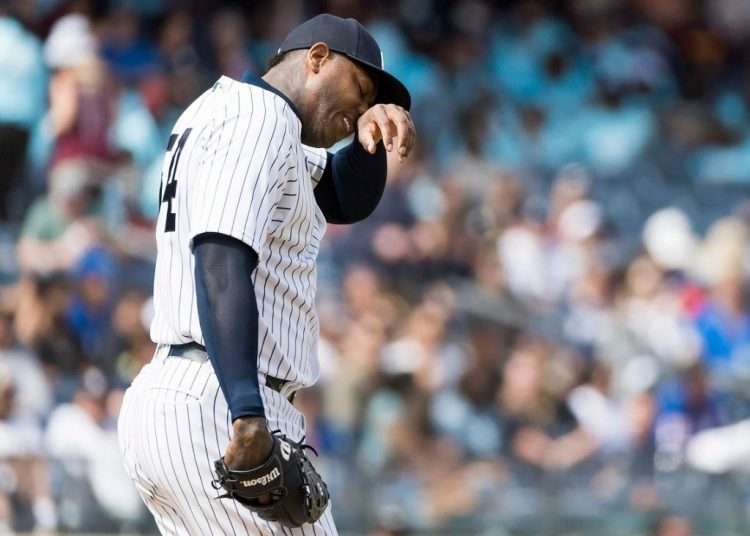 Aroldis Chapman will be out of action for a couple of weeks. Photo: Taken from the New York Post.

A grand total of 31 pitchers in Major League history have managed to reach 300 saves in the best baseball in the world, but of those, only six have climbed to the next level completing 400 saves. The privileged ones are three immortals from Cooperstown like Mariano Rivera, Trevor Hoffman and Lee Smith, escorted by Francisco Rodríguez, John Franco and Billy Wagner.

Cuban Aroldis Chapman, a member of the New York Yankees, exceeded 300 saves last season, and in the current one he rose to 24th place all-time with nine saves in the first two months of the contest. However, an Achilles tendon injury and his unstable performance could jeopardize his chances of advancing to the Top 15 of MLB’s best closers.

Chapman needs 26 more saves in his quest to catch up with Hall of Famer Rollie Fingers at 15th on the all-time list. A priori, it is not a prohibitive figure for the player from Holguín, who could complete it this season if we consider that he has recorded more than 30 saves in eight of his 11 seasons as closer.

The question at this point is his health and his performance, two aspects that are of concern. Initially, Chapman only has inflammation in the Achilles tendon, but he needs to take extreme care and strengthen that plane in order to avoid ruptures. The Yankees have placed him on the 15-day disabled list, but it’s unclear if he’ll need more recovery time.

Apart from this, the southpaw faced a drop in his performance that, in his own words, was not associated with the injury. During his first 12 starts of the season, opponents hit him for a poor .111/.256/.139 offensive line, but then they bombarded him in his next five appearances, in which he accepted nine hits (two home runs), six runs, with a rival OPS of 1.469.

To all this we must add a detail that we have already referred to before: his speed averages. Taking this season as a reference, Chapman has lowered his average speed with the four-seam fastball (96.8 miles), the sinker (100.2) and the slider (84.2), indicators that are by far the lowest of his career. To a large extent, this has caused the rivals to achieve more effective contacts, as evidenced by the fact that 39% of the hits allowed by the southpaw are considered Hard Hit (95 miles or more), the second worst record of his career after 40% last year.

As if that were not enough, Chapman has competition in the Yankees, a detail that we cannot ignore. Clay Holmes has been the best reliever of the season in the American League, posting a 0.36 ERA, 26 strikeouts and just two walks against the 89 batters he has faced.

Holmes has 24 consecutive scoreless innings this year, the best streak in the Majors. In total, he has pitched in 23 games, and in 21 of them the Yankees have ended up winning, so he is something like a talisman for the Bronx Bombers. He has taken over Chapman’s job after his injury was confirmed and it remains to be seen if he will keep it when the southpaw returns.

Néstor Cortés is a candidate for Cy Young

It is a fact, every week we will have to talk about Néstor Cortés Jr., the best Cuban pitcher in the Major Leagues this season. The Yankees left-hander is the leader in WAR among pitchers (2.3) and has the lowest average of hits allowed per nine innings (5.604), without forgetting that he is second in ERA (1.70) and in average runners on base (WHIP) with 0.849.

The Cuban drew his last gem last Thursday against Tampa at Tropicana Field, where he silenced a crowd of 14,000 fans. Eight innings, four hits, one run, one walk and five strikeouts was Cortés’ score, who won his fourth win of the season and reaffirmed himself as a surprising candidate for the Cy Young Award.

Although there is still a long way to go, the Yankees left-hander has made Cuban fans dream, who have only celebrated one Cy Young in history, more than half a century ago. The protagonist of that feat was Mike Cuéllar, in 1969, when he won 23 games and left an ERA of 2.38 in 290 innings.

But if we compare Cuellar’s first nine starts in 1969 with Cortes’ nine starts this year, the Yankees’ kid has a much more consistent pace. For example, “Nasty” Nestor’s ERA is 1.70, while the Orioles southpaw had a 2.62 ERA over that span.

By the way, since Dave Righetti in 1981, no other Yankees pitcher had posted an ERA below 1.70 after his first nine starts. Cortes is definitely breaking all the molds.

Since the Statcast system was implemented in all Major League ballparks in 2015, a total of 35 Cubans have hit at least one home run, and 33 of them have had one of those hits go beyond 400 feet. The only ones who fell short of that mark were Dariel Álvarez and Henry Urrutia, but they had very little time in the Majors to show their true power.

Although sometimes this theme of time is misleading, as was demonstrated with Rangel Ravelo. The Havanan consumed less than 85 at-bats in MLB, but in that span he scored the longest home run by a Cuban in the Statcast era, with a 487-foot shot off pitcher Tim Melville, who saw the ball fly at Coors Field in Colorado, on September 12, 2019.

Not even Jorge Soler, José Abreu or Yordan Álvarez have been able to come close to the mark of Ravelo, who has played in Japan for the last two years. These three men are the maximum referents of power for Cuba in the Majors after the retirement of Kendrys Morales, another one who stood out for his colossal home runs.

Of them, Soler has taken a liking to kilometric home runs, in fact, he leads the entire Cuban Major League team in home runs of more than 400 feet if we take as a reference the connected home runs from 2019 to date. In these four seasons, the kid from Melena del Sur has hit 68 balls to more than 121.92 meters, adding the two he got this week against Charlie Morton (413) and Drew Rasmussen (425).

Soler is the second player in the Major Leagues with the most complete return balls greater than 400 feet, just behind Pete Alonso (75). The two of them, along with the Dominican Nelson Cruz (64) and Mike Trout (60), make up the exclusive group that have overcome this distance at least 60 times since 2019.

But the magnitude of Soler’s show is much greater. If we look at the batters who have exceeded the 440-foot mark the most times, the Cuban leads the list along with Alonso, both with 19, closely followed by C.J. Cron (17), Fernando Tatis Jr. (16) and Trout (16).

These data give a measure of the power of a man who has a 468-foot home run record on April 29. Will he manage to go above that mark in the future? I assume it will not be easy, but he is the one who pronounces the laws in the Soler system.

Adolis García, indomitable in the epilogues

During the last week, Cuban Adolis García has had at least two hits in four different games, with an RBI in each of those games. In all, he had eight hits — including four doubles — between May 21 and 27, averaging .333 over that span.

At first glance, it is a very normal performance, without extraordinary details, but if we dig a little deeper, we will conclude that Adolis is a very dangerous monster in the closing games. If you have doubts, I invite you to observe these data:

* On May 21, in the game between Texas and Houston, Adolis drove in a run in the eighth inning with a single to centerfield.

* On May 24, in the duel between Texas and the Angels, Adolis drove in a run in the ninth inning with a double to rightfield.

* On May 26, in the Texas-Oakland duel, Adolis Garcia drove in the go-ahead run for his team in the ninth inning with a double to leftfield.

* On May 27, in another game between Texas and Oakland, Adolis drove in the tying run for his team in the eighth inning with a double to centerfield.

We could think that the production this week of the player from Ciego de Avila, between the eighth and ninth innings, is nothing more than a coincidence, but again we would be underestimating his ability to bat in the final stretch of the games.

To put us in perspective, I tell you that from 2021 to date, Adolis is the Texas player who drives in the most runs (35) in the final third (from seventh to ninth) of the games. His production under these circumstances puts him in the top 20 in the Major Leagues in the same span, which is no small feat.

The Cuban is also the leader in RBIs for the Rangers in the ninth inning (nine) and in extra innings (eight) since last year. By the way, in extra innings he has been the best in the Majors along with Jeimer Candelario and Kevin Pillar.

Brian Serven, a 27-year-old from Palm Desert, made his Major League debut on May 18 in the duel between Colorado and San Francisco. He only consumed two at-bats with nothing more than a ground ball to second and a fly ball to rightfield. But the Rockies mask was in time to make history early in his career, and it happened as early as his second game at the Big Show.

Three days later, in a game against the New York Mets, Serven shook off all the ghosts and the flaws of his previous performance were forgotten. In his first at-bat, he hit a two-run homer off Trevor Williams, and on his third trip to the plate he repeated the dose with another two-run homer, this time off reliever Dominican Adonis Medina.

What does the exclusivity consist of? Well, we told you that none of the more than 22,000 men who have played in the Majors had hit two homers of two or more runs in the same game for their life-long first hits.

The Colorado catcher followed instructions to the letter and became the second franchise player to have his first two Major League hits become home runs. Shortstop Trevor Story had done it before in 2016, although – unlike Serven – one of his homers was with clean bases.

The performance earned praise from the likes of Vinny Castilla, a Rockies reference. “That has been beautiful, man,” the Mexican told Serven, who believes that mental strength has been key to his success.

“I am very confident in my ability, I have been for years. That’s why I went to Arizona State. That’s why they recruited me. That is why I have continued to improve. With continuous improvement, there is confidence in what you do and what you believe. I have that constant need and desire to improve, which helps keep me motivated for more.”