The 1980s were the heyday of Soviet and Eastern European culture in Cuba. 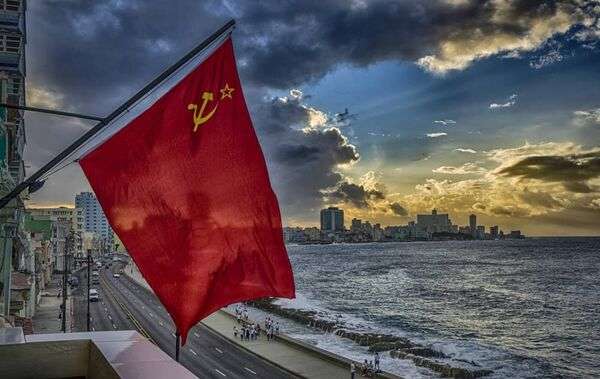 In 1980 Arnaldo Tamayo arrived in space during a Soyuz mission in which troops from socialist countries participated, including Mongolia, Vietnam and Cuba, the weakest links in the CMEA. The Cuban army, which had redesigned its system of military ranks since the time of the Sierra Maestra to homologate them to those of the Soviets — except for the title of Commander of the Revolution — carried out military parades in the Plaza de la Revolucion with accumulated tanks and weapons. One of them to the sound of the “hurrahs,” shouts that the Cubans had heard in films like Liberation, but quickly corrected by the military themselves, who after all had ordered the image of the Mambi independence army’s cavalry to be printed on the side of the tanks.

In retrospect, the 1980s were the heyday of Soviet and Eastern European culture in Cuba. The integration into the CMEA, which made it possible to cushion the effects of the U.S. embargo/blockade, resulted in an increase in the levels of long-in-deficit domestic consumption during the previous two decades, marked by queues, the empire of the ration book and the black market.

For the first time in a long time, Cubans came to have access, through the so-called “parallel market,” to a range of products such as canned foods, different types of milk, cheese, cereal, arará cognac, Bulgarian wines, and textiles and footwear from the GDR and Poland. This is one of the bases of generational nostalgia of those who approach the subject in a testimonial way, although generally without alluding to the asymmetries and contradictions typical of that attempt at alternative integration that, according to several economists, had among its greatest weaknesses verticalism and the paralysis of horizontal relations between enterprises.

Nor to the most important thing: to the fact that, although they resolved, the quality of all these products was always below Western ones. That was precisely, together with the technological gap, one of the many reasons that in the popular imagination of Europeans decided the fall of the Berlin Wall and, in the long run, of the entire system like dominoes. And it was just the tip of the iceberg of the real problem: the non-existence of a truly alternative culture to capitalism, escorted by inefficiency, excessive statism, rampant corruption and the growing gap between the representations of the elite and the daily reality of the people.

Around that same time, many of the Cuban students who had gone to train as professionals in science, technology, and the humanities at the main Soviet universities began to return to the island: they included everything from atomic engineering to philosophy and scientific communism. (In the 1984-1985 academic year around 10,000 Cuban students studied in the USSR.) And, with them, one of the most interesting phenomena of the period would take place, from the sociocultural point of view, due to their addition to the melting pot: the Russian-Cuban couples. Their offspring received the name of “warm waters” — a mixture of the warm tropical sun and the ice of the tundra — and in many cases would imply the emergence of bicultural subjects.

At that time everything Russian was within reach, like the language itself, which was studied not only in technical careers and military institutes but also with the teachers of the Radio Rebelde station. And there was even a popular participation program called 9550 — the number of kilometers between the two countries — that rewarded the winners with a trip to the USSR.

And there were also the famous dolls. Frequently embodied in the apology for Russian dolls that other receivers rejected by moving the Krim TV set dial elsewhere, the post-Soviet nostalgia made it obvious that this process did not penetrate deeply into Cuban culture, except in politics, ideology, and Party and military structures.  On the other hand, that nostalgia is also based on documenting the Russian-Soviet presence in literary productions and in film. But taking popular music as an indicator, there was not and could not be a fusion between a balalaika and a tres or between a polka and a guaguancó. This certainly marks a difference from other musical traditions such as that from the United States, where contact has left indelible marks. They are in Dizzy Gillespie and Chano Pozo, in Dámaso Pérez Prado and in Latin Jazz, to mention a few examples.

The problem is not only that explosive marriage between the guitar and the drum, characteristic of both cultures — in a word, between Western Europe and Africa — but that, as several Russian intellectuals of the late 19th century thought, the cultural location of “little mother Russia” pulls more to the other side than to the West — that was one of the recurrences of Dostoevsky’s pan-Slavism, and it even reaches the figure of Stalin. What is traditionally known as “the Russian soul” is introspective and inward looking, while the Cuban is outgoing and open. And let it be known that it’s not about ontological categories, but identity traits that are, precisely, thanks to essentially different ethnocultural processes. Cuban men and women dance with their hips; Russian men and women with their feet.

To say it loud and clear: it is not about denying the Russian-Soviet imprint on national reality, because it is there; nor to dispense with the validity of the nostalgia as a vital experience. The question is to discern whether or not that mark is inscribed in the core of a culture that, by tradition and right, belongs to the West and has nothing to do with the birch trees or with the cold of the taiga.

In the middle of the decade, a fire destroyed the Moscú Restaurant, located on Humboldt and P, in the same place where the Montmartre cabaret had been and where the March 13 Revolutionary Directorate had executed one of the members of the Batista dictatorship.

That fire functioned as a harbinger of times to come. Perestroika and glasnost, like a Pandora’s box, would end up setting fire to everything and opening the way to a unipolar world.