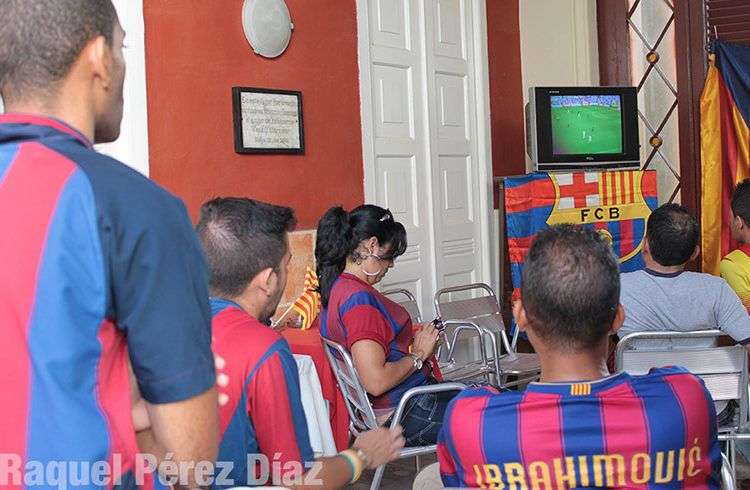 This weekend, millions of Cubans enjoyed the classic Real Madrid-Barcelona. And it’s not new; they can watch all the matches of the Spanish League live without paying for it. Local TV transmits to the delight of lovers of this sport which increasing numbers, especially among the younger generation, threatens to dispute the first place of baseball as the national pastime.

This Saturday some of the members of the official Penya of the Barcelona Football Club met in Havana to watch the game in the cafeteria of the Catalan Society. Most are young people under 40 and some come with his wife and children, all wearing club shirts, which incidentally are not sold in any stores in Cuba. They are the generation of Cubans that has changed baseball for football.

José Enrique Gomez is the vice president of the Penya Barca in Havana, which started in November 1996. “Many of us Cubans have followed soccer our entire life. I have been following it since the first European Cup, we followed it on Radio Exterior de España, “says Jose Enrique and smiling adds that” for years we followed the game without ever having seen the face of the players of most of our teams. ”

From 2000 fans started coming to hotels to watch the games but having to pay the 3.50 Euro entry, something that was not available to everyone. “This season is the first that can be followed all league matches live on TV,” says the vice president of the Penya. The only exception is when a match occurs simultaneously with Cuban baseball, and then football is broadcast delayed.

Domingo Vila is a retired Foreign Trade worker and one of the few of his generation who are fond of football; it may have to do the fact he was born in Catalonia and came to live in Cuba at 12. “I learned to play baseball but to the extent that football began to grow in Cuba I went back to my roots,” he says smiling. He explains that the boom in football has to do with the economic crisis of the island, “you need to play baseball bats, gloves, baseballs for 9 players while in soccer one ball is enough to start running.”

Liuber Perez, another member of the Penya, adds that the fall the quality of Cuban baseball also affects so “as young people we find more attractive to see a European football game than one of the national baseball series. Now they are trying to rescue it playing US MLB games on TV but still it will cost them dearly to regain the lost ground. ”

“The shift to football began when they started to broadcast live the Madrid-Barca matches about 4 years ago. Now they do it with all matches in the Spanish and German leagues, “explains José Enrique Gomez, adding that” here they know people love football and that is why you can watch live all matches of the World Cup “.

There is a generational shift in the liking of sports; Domingo Vila tells us that Cuban grandparents are mostly baseball fans while football has gotten through their veins to children and adolescents.

But he acknowledges that “even today in Cuba when there is a baseball game between Industriales and Santiago, the stadiums are filled like in a game of the Madrid and Barca.”

Among younger Cubans the growing passion for football already seems irreversible. Many factors have contributed to this happening, some political even, because while even national TV for years broadcasted European football matches, it just started to show timidly some games now of the MLB. Whatever the cause the fact is that football is winning over Cubans.