Sport and the World Cup (II) 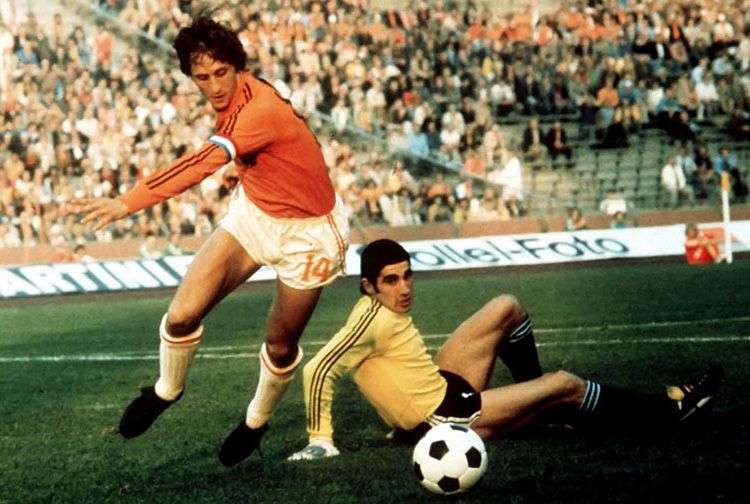 The goal of our favorite team shakes us, but if the goal beyond what it nature demands it (add a point to the scoreboard), if it is something that goes beyond our expectations only by kindness, without it, then, I say, goal is going to shake us even more. And we gonna shake even more because the act of shuddering itself knows that shaking is not in vain, but a move that will justify, from now on the excitement we give it.

It’ll reliance by itself but also will influence other post actions and that will create bridges and analogies and will assist in the necessary conformation of what we call a tradition, a memory. Fabián Casas syas he doesn’t remember a better start in the world literature than Neeskens penalty two minutes after the staring whistle of the finals in 1974. Netherlands started with the whistle from the center circle and no German touched the ball until Sepp Maier took it out from the back of the net.

Neither the subsequent goals by Breitner (also a penalty kick) and Gerd Müller, nor the title of the host team are as memorable or influential as the Michels and Cruyff team, or the goal by Neeskens. But enough about Germany in the early seventies, it is, in short, another legendary team. Who actually remembers the England of 1966, despite Charlton, or Brazil 1994 despite Romario? There are deservedly more literature and myth around the Hungary of 54 than of Germany’s 90. All revere Menotti and Bilardo is just a footnote in the vast Maradona´s book. A World Champion title is like a Nobel prize or any other, does not guarantee the long real permanence, a live status of your work.

I do not think, from what I’ve read, and what came after, witnessing the Barcelona of Guardiola, for example-that there was a bigger team than Ajax or the Dutch team of the seventies. It was healthy that the Dutch did not win any of those two consecutive finals played in World Cups. This apparent failure shows that there is something more important than getting a degree: expanding the boundaries, breaching, clearing the stretch of jungle that others considered impenetrable, create new streams of sense.

Benavente won the Nobel in 1922, a year in which Joyce writes Ulysses; Eliot, The Waste Land; Rilke’s Duino Elegies; Wittgenstein, the Tractatus; Vallejo, Trilce; Proust ends at last À la recherche du temps perdu. All Benavente is not one page of any of these books. What Nederland proposed was another way of thinking.

The invention of Total Football is such a wonderful method that, even today, there are very few schools with physical and mental capacity to implement it. When it happens, what remains is the applause. Their existence, rather than override other styles and identities, makes repudiate a specific type of football: the schools without trample on behalf of the aesthetic result, the teams that can compose a symphony and comply with the ephemeral success of a pop single.

Nor the wild hunger of Uruguayans, or the inexcusable lock of the Greeks, but the muscular Brazil of Filipao, more concerned with direct personal glory than of the importance of the game, or speculative Netherlands, which is, as we know, is the least Dutch there. Should be allowed, by decree, at least we are not the natives of footballing countries, descent to the forms, not shirts. Go from Zidane’s France to Xavi’s Spain to Colombia today. There is probably more consistency to hold onto it when Brazil is not Brazil or Netherlands is not Netherlands when it is not. It’s funny the gibberish that some suspected fans of the canarinha or the oranje invented daily in order to justify their accessions. Luckily for me, Argentina never reaches the sublime, but neither betrays.

The strange enjoyment beautiful football produces also has to do with its invulnerability. Football, enabling fast recounts and is as a key test piece to read, shows that the calculation is usually applied to go undefeated graceful gesture any less rigorous sensationalism. No courtesy in its superiority, no manners, and when it ends, something in the air darkens. Spain lost in the first phase. Alexandria burned.

Sales in CUC and CUP: One peso or five pesetas…?

Some notes on self-employment

Some notes on self-employment

Keep on reading: All by Chavarria for one by Padura