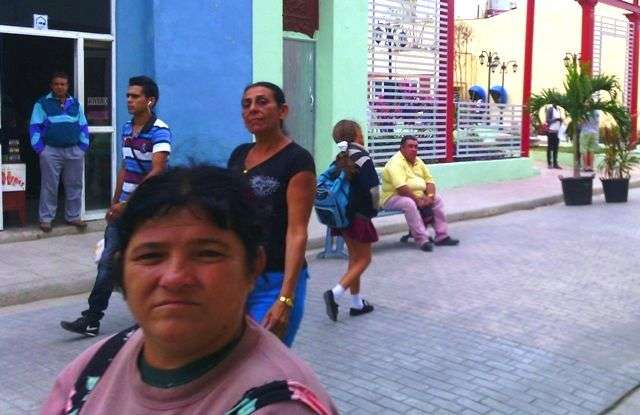 The character in the picture sells a song in one peso. She walks through the main streets of Camagüey announcing her crazy offer, and always a joker appears eager to annoy the neighbor who buys “a theme for your friend.”

The songs that ¨One peso a song¨ usually sings are Mexicans and since Mexicans themes (especially when they involve musical instruments) are usually a Japanese torture, the transaction always ends in a circle of people laughing to death, cornering the interpreter and her victim at the same time.

Another lady in the line for ice cream, sells ” for five pesos a pair of earrings for any occasion, five pesos for a hand towel and five pesos for the sponge”, which according to her are good both for washing or bathing.

She has been selling the same for a week, and I in the street, dazed, wondering how many sponges she has left. If it were a payable amount I swear would buy them all, just to stop hearing the hysterical cry, which sounds to me as familiar and uncomfortable as the subject of presentation of the TV news.

Cuban women between 50 and 60 years of age are usually fatigued women.

Possibly the same that now sells sponges for washing has scrubbed before a plant thing, like a cucumber straw, which became fashionable in the 90s when the Chinese industry had not yet arrived to relieve us from the general lack of garbage.

They were years of carrying buckets of water, to clean the floor with the oldest pullover, and cook on a stove that like a cigarette had a week more to live less every time you lit them. In the barrio people said that misfortune had two names: a living mother-in-law and a Piker cooker…

The “sophisticated mature” women known in slang as “good forties” or simply “deadly tembas” are rara avis in the city: when one suddenly appears is as if the Unicorn appeared; then everyone remembers what it was doing when it happened.

In important hotels and businesses, where energy plan doesn’t requires disconnecting the AC at full noonday, sophisticated mature are more common. But in other places the heat wrinkle skins faster and makes the mascara to get confused with crusts.

Many neighborhoods like mine stand out by the high number of women who are housewives, teenage mothers, or peddlers of sponges for washing at five pesos, although their physical and mental faculties serve for more queuing at the winery or stun others with hysterical cries.

With few exceptions the Cuban women struggle for their children more than for their husbands, and one hour of daily soap opera does not seem to be sufficient compensation.

Rock, absent from Cuban Drum Festival on its own will

Governor of New York will come to Havana