Yulieski Gourriel and his playful gods 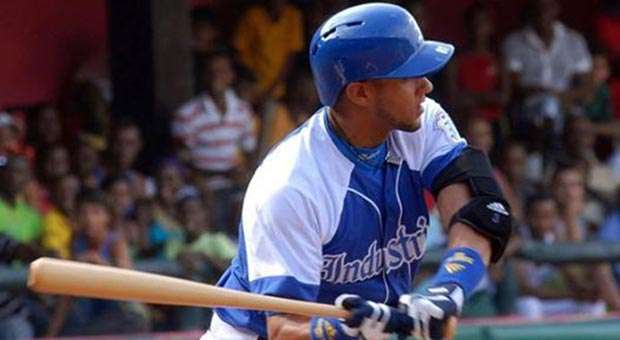 Aren’t you going to talk about ¨Yuli¨ and his debut with Industriales? A smile on his face was eloquent sign of the irony dose that accompanied the question. The inquisitor was one of the many “local bodies” whose name you never know; you do not even need that detail. In the end you only them from time to time, perhaps in the corner bar when you buy cigarettes or on one of the sidewalks in the neighborhood, when they consumed their drinks and walk on the hunt of anyone to give free rein to their passion: baseball discussion.

He had never read my work and certainly never will. To him, I’m a journalist who writes on Internet, the one who regularly updated him on the performances of Cuban players in the majors, and one of his fiercest rivals in baseball debates. For my part, I confess that I enjoy that granted status. Getting entangled in those heated battles on our national pastime, it is an offer I have always found hard to refuse. Fate decided me to live, for more than 25 years, at just 200 meters from Latinoamericano Stadium, so it could not be otherwise.

This time there was no time for controversy. I had to take my little boy at the child care center and I was already late. Trying to appease his obvious displeasure, I promised I would write a few lines on the blue debut of the stellar third baseman, and I also agreed to have a few minutes exchange. I continued walking and from that moment I started to collect ideas for the new article.

I’m sure there are a few gods up there having fun making pranks to Yulieski Gourriel. The first big challenge came to him by family heritage: to be Lourdes´ son, the man who did not fail at zero hour. Right there one of those naughty divinities decided that he would be Cuba team’s final games last batter. Well, only in those games where we got down to the ninth inning and the scene was set to reverse the situation. There, “at tough moment”, he would be destined forever to emulate the hero of Parma. You already know the end of these stories.

Cuban National Baseball Series have brought him another fate misfortune. His team is not a winning one. Although in most of the campaigns in which Yulieski has intervened, Santi Spiritus has had good squads , this generation has not still reached the longed title. They almost did it in the unexpected final against Holguin, where despite being favorites they were defeated at their own headquarters. Other times they have been eliminated in semifinals by Industriales, Pinar del Rio, Havana, Matanzas … anyway. And to keep the custom, the playful deity has call Yuli some times, at the moment of truth, to see if he finally manages to do it…

On the other side, there were the Industriales million historical rivals scattered throughout the island, including Havana. “This traitor daddy’s boy is going to have a very bad time when he visits us when the series begins”, message that undoubtedly envisioned a complicated future.

Inexplicably someone decided Industriales first subseries were against Santiago, Cuba’s baseball classic. It was something like if the Spanish League opening match would be Madrid vs. Barcelona, when the teams, fans and media have not even warmed engine. It must have been some God-faced Korean, who the 2008 Olympic final left him eager to continue fucking Yuli. The now blue third at bat would have such a tremendous debut.

The expected day arrived. There were no spaces at Guillermón Moncada ballpark stands. After two outs the local presenter announced the name of the “outlaw”. Party began for Santiago fans. Apotheosis was total when Danny Betancourt pitched a change up on which Yulieski dramatically made a swing and missed. At this point the audience was already shouting him “chicken”, because his former team is known as the roosters. Anyway, in any case that was the first sign of the welcomes that awaited him at his pass by the stadiums of the entire nation.

That day, though he hit two good lines, Yulieski failed in four at bats. My hypothesis on playful deities was validated even more in the second game. He went 0 for 4 a gain, and also with two strong connections, and Santiago conga also had a great time. Yesterday, in the final match of the subseries, it seems that Olympus gods were busy with the day of Champions League in Europe, and Yulieski was able to hit two hits.

Yulieski is one of the most complete players Cuban baseball has given so far this century. At least I have no doubt in that regard. Furthermore, I believe that he is one of the Cuban players who, for a while, is over our national baseball series level and needs to play in other higher-level leagues. As I told you I think his only problem is associated with joking gods who enjoy making him mischief from time to time. And luckily for him I think these things are solvable…

When the authentic is named Lila Downs