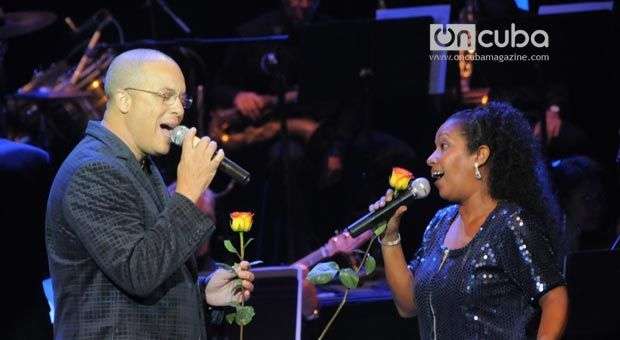 Isaac Delgado , Argelia Fragoso , Vania Borges , Coco Freeman and Adrian Berazaín , were among the performers that purely Cuban night held on Thursday at the National Theatre .

Going to the root and find in it musical essences that sometimes seem ethereal and away from todays sounds may seem a proposal we can go without. But for all, the second meeting of Popular Voices insists on reminding us to travel to the real thing is a journey to enjoy and meet with ourselves.

That’s what we perceived this Thursday at the Covarrubias Hall of the National Theatre, where national figures undertook a melodic route through distinctly Cuban genres. To break the “ice”, the balladeer Raquel Hernandez seduced with that Zun Zun proclamation, by Ernesto Lecuona, and as background the impeccable notes by the orchestra formed for the occasion and led by maestro Guillermo Fragoso .

I have to note that the musical selection of the evening could not be better. Authors like Juan Formell, Sanchez de Fuente and Cesar Portillo de la Luz were taken up by popular and talented voices of the island, as Vania Borges and Coco Freeman.

A special moment of the Cuban Gala was the union, on stage at the National Theater of Isaac Delgado and Algeria Fragoso, who chairs the event. The Delgado-Fragoso duet sand that classic “Interlude,” by Portillo de la Luz.

Yyoung pianist Rodrigo Garcia and girls Adriana and Andrea Lopez-Gavilan also won the applause of the audience. They sang a touching “Pensamiento” by Rafael “Teofilito” Gomez.

Another hit of the concert was to not only show the past edge of the national repertoire, but that in the drama of the night it was observed the current state of Cuban music. That was the case of the singer Adrian Berazaín who sang a poetic Broken Hearts Club and “ripped” a nice ovation.

Two instrumentals drew my attention since the performances were flawless. One day in November, by Leo Brouwer, became perfect piece for the experienced guitarist Joe Ott , while Puesto y convidado by Ernan Lopez – Nussa , was played by the talented Harold Merino.

A final highlight, with the voices of the future, was chosen for this Gala Cubana. The Coralillo of the Schola Cantorum under the direction of Elizabeth Gutierrez played Habanera tu, by Sanchez de Fuente.

Just to mention two items that could be improved, in order to achieve a better show : the performance of Cuban Television Ballet both times it came out on stage, could be accompanied live by the orchestra , and not as it happened, only in its second appearance , which would have given greater authenticity to the Cuban dances they wanted to emphasize.

Second: the length of the concert was just under an hour and attendees were left with the desire to see a little more of Cuban music. Still, this first concert of Popular Voices seduced by its contemporary way of looking at the past and by placing the new trends along with that same past of which we all are heirs.