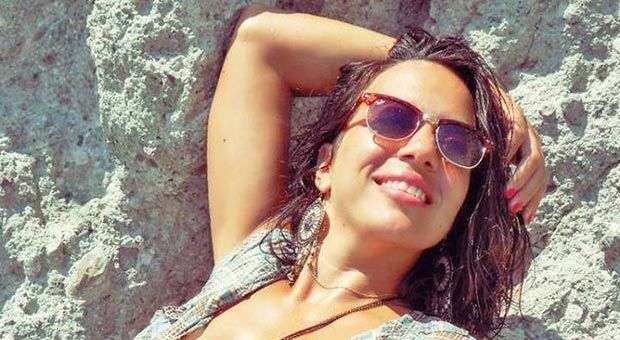 She confessed me being the legitimate daughter of our Holy Patroness, Oshun . Anyway, I think she is equally blessed by the Virgin of Regla, Yemayá . She was scarcely two months old when she received her first dip, a sign for future life story marked by the adventures at sea.

If I were asked a word to describe her I would not hesitate a moment: Cuban. Yaima Espinosa is a woman on this island. Enterprising, always ready to break stereotypes in an effort to achieve her dreams.

She is the daughter of divorced parents, Santa Fe and nearby National Aquarium in Miramar were the places where she grew up. Always close to the sea. One day she decided to migrate to Italy looking for new ways in finding complete happiness. There she continued her eternal bond with water, now as a professor of swimming and synchronized swimming.

Thanks to a friend she learned of the existence of the contest “Miss Cuba in Europe.” By knowing that among the prizes of the event was a trip to our island, she did not hesitate in completing the application. Just a few hours after the event, she kindly agreed to make us share in this unique experience, and in unison tell a bit of her story.

Your life has been marked by a special relationship with the sea and water sports .

Without a doubt. I started practicing yachting at fourteen, at the base of Santa Fe. I had the support of my coach Oscar Sanchez, to whom I owe my entire career. I became a bronze medalist at National Cups and won on one occasion the famous regatta “The Key to the Gulf “. I remember once we were invited to a competition in Mexico but: there was no budget! My style was the table (windsurfing). I could never access the national team, despite being among the top three of my class … it was hard and not only associated with quality issues.

Not only was I competing in sailing. I was also in the International Water Ski team from the Marina Hemingway. Surely you ever heard watercraft skills, traveling throughout Cuba. In unison they created the first team of women surfers on the island, called Cubanitasurf , and also the first for children under 16 years , surfinf West, based in Santa María del Mar. Both projects had the support of the Pan American Surf Association (PASA) and others.

And are you currently coach of Swimming and Synchronized Swimming there in Italy?

Yes, I teach swimming to children between five and eight years, and last year also had a group of girls who were taught synchronized swimming classes, but in this course we have not yet begun. This work, despite being badly paid (depending on the responsibility that implies), is my greatest satisfaction. Not only professional results, but because I love seeing my children winning and that makes me very happy … the love and joy of these little kids distract me from the nostalgia of our Cuba .

How do you get to Miss Cuba in Europe?

The truth I was very lucky because I had no idea of the existence of this contest. My best friend here in Rome, Yanaysi Perez during a training day told me about the event. Admission has an age limit was and she could not participate, so she decided to encourage me. When I learned that among the prizes was a trip to Cuba I said why can I not try? Then I filled out the application with all the details that are asked and luckily I was accepted.

What is this beauty pageant, Miss Cuba in Europe, about?

It’s the classic beauty contest, where a highly qualified jury selects the most beautiful Cuban representative among all participants. Perhaps the most striking or special is the fact that the organizers are always looking to make it a party where Cuban culture is made present, and the opportunity not only to assess measures, faces or walking on a catwalk. In this issue 24 women have reached the final, all coming from various European nations, all Cuban of course.

Is this the first time they have it?

No, it has been happening since 2005. The event was created by the Italian Vincenzo Tocccaceli and its Cuban partner Dafne González. This is the eighth edition.

For Vincenzo “Miss Cuba in Europe” was born as a game, but has gone ahead very seriously despite many difficulties in his way. By the way when I mentioned him this interview he wanted me to use some of his words: “We want to not only reflect the undeniable beauty of the daughters of Cuba, we also disclose genuine elements of Cuban culture and traditions.”

The final will be on November 10 at a huge nightclub, famous for promoting Latin music. It is named Palavicchi and is near the Rome’s Ciampino airport.

You said on Facebook that for you as a former athlete was very hard to win in this type of competition. Why?

I was referring to my personal experience as a former athlete. I grew up in the sports world where sacrifices between studies and daily training, there was scarcely time for parties, makeup or fashion. Then this event has become a total and difficult learning. I have been practicing for days how to walk along a catwalk in heels and showing no stiffness … phew….I just look in the mirror and look for reasons to be sensual and more attractive to find details of my femininity.

Do you think these competitions seek only reaffirm current models imposed by the market of female beauty? Maybe that’s why you find difficult the idea of seeing a former athlete succeed.

Phew … a complex question … From the point of view of what you normally requires the market in their standards of beauty and style, yes, and certainly becomes difficult to win if you’re not part of that world. And no we are in a developed capitalist country like Italy, and to the nation’s top fashion where style and Bene essere are essential.

Now, if you support the purpose of this contest, which seeks to look beyond physical beauty, and delves into the culture and identity elements of our Cuban, I think all possibilities are open!

My Cuba, our Cuba. For me it is the freedom to grow happy, no shoes … running through the puddles that the showers formed, where after the tadpoles grew as broken sewers didn’t swallow the water. The tranquility of living without constant episodes of violence , drugs or guns to harm us … no McDonald’s to get us chubby … ( they are not even as good as they say ) .

We didn’t lavish nightclubs with a capacity for 2000 or 4000 … but instead we could enjoy good music in every corner, salsa, reggaeton, son, and if dancing was not my strong when I was little, I always had the option of playing with other kids.

A final message for the readers of the magazine.

Thanks everyone … to you Daniel for your interest , support and for giving me the opportunity to socialize this unique experience. I also thank those who took a few minutes of their time to read my story, and I wish they could find something of you in my words.

I am a Cuban girl who decided to live fourteen thousand kilometers from the island in search of new dreams, as occurred sure to many readers. Where I ‘m happy … but I’ll never have a life full of joy as my teenage Cuban life.

Yulieski Gourriel and his playful gods