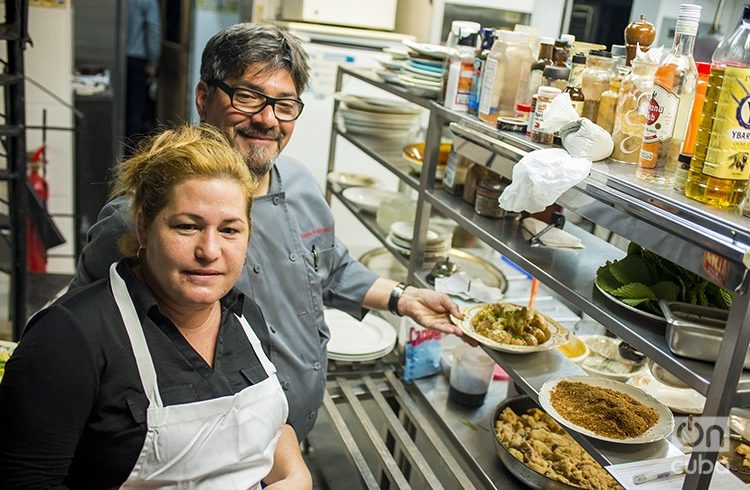 A group of four Cuban chefs traveled to the United States to spend time with colleagues in that country on the invitation of Cuba Entrepreneurial Exchange. This experience, which also had the support of the John S. and James L. Knight Foundation, was an enriching one for all involved—a lot is written about cooking but there is always more to learn. This excellent opportunity was coordinated in Cuba by Niurys Higueras, owner of the restaurant Atelier and one of the most enthusiastic Cuban women entrepreneurs in the culinary world of the island’s capital. For several years now, Niurys and her restaurant have hosted the gastronomy creation groups Ajiaco Cimarrón and Cubanas Chef (Cuban Women Chefs). The objective was to pair Cuban chefs with the kitchen crews of various Miami restaurants, rotating them through different establishments during their stay in the United States.

As a culmination to the project, the Cubans prepared a dinner at the Culinary Institute of Miami Dade College. The four cooks, selected because their experience and professional qualities, were: Yamilé Magariño Andux, a pastry expert; Luis “Lucio” Alberto Alfonso, chef of the restaurant Gringo Viejo; Michel Calvo, chef of the restaurant Atelier; and Gilberto Smith, chef and owner of Pizza Nelly, and also grandson of the celebrated Cuban chef Gilberto Smith. The Cubans were welcomed by Wolfgang Birk, of the restaurant Área 31; Bernie Matz, of Bodega; Alberto Cabrera, of Bread and Butter; Douglas Rodríguez, of De Rodríguez Catering; Tomás Prado, of Golden Fig; Miguel Aguilar, of Wynwood Kitchen y Bar, and Steve Hosang, of Sushi Maki.

I was at one of the restaurants that were part of our rotation, and its chef suggested to me that in addition to my own recipes, we should prepare a dish based on marshmallow. He couldn’t remember the marshmallow recipe, and told me to hold on a minute for him to look for it on the Internet. I said to him, “You don’t have to do that. Go get the scale; I’ll tell you the proportions.” He looked at me in amazement. We prepared the dough and the marshmallow came out perfectly. “How do you know the recipe so exactly?” he asked me. (The thing is, in Cuba, not being dependent on the Internet makes you study a lot and devour books.) I answered, “We work with books and rely a lot on our memory.” The chef couldn’t believe it; he told me that I’d taught him a lesson that day.

I was sure about my professional potential. I had had other experiences abroad, although this was my first time in the United States. I was worried about how I’d be received by the chefs of the restaurants where we would work, but we were really welcomed. They asked me where I wanted to work, what we wanted to know; they wanted to give us the best…. I worked in the restaurants Golden Fig, Area 31 of the Hotel Epic, Wynwood, Sushi Maki and at Miami Dade College. Here in Cuba, with my colleagues, I’m always talking about sous-vide cooking machines. For me, that’s something tremendous! The place where we prepared the final dinner had one of those machines, and my colleagues began teasing me. I really enjoyed myself, because I prepared fried pork chunks glazed in duck fat…. (This was a contribution of my own, because they didn’t have pork fat. All they had was duck fat, and that’s what I used.) That day was a challenge, the diners included the Carroca brothers, three of the best chefs in the world, with several Michelin Stars…. The hardest thing about his trip was saying goodbye to my daughter, who I hadn’t seen for four years.

This was my third visit to the United States. It was a very good experience. Look, whoever is a professional in Cuba, in whatever industry, is a professional anyplace else. Here, we do wonders with almost nothing; we achieve the flavor despite all of the things we don’t have, and that is something tremendous. They asked us there, “And that’s done in Cuba?” (They think that we are lost because of all those resources we don’t have, and that they have plenty of.) Paradoxically, the not having has made us grow.

Over there we worked with their menus. We learned from how they organize their work and run their business. You always learn something, wherever you ar, and they also learned from us. We were the focus in each place. The attentions were exquisite. At the College, during the final dinner, we shone. Everyone was interested in us!

For me it was a very useful experience. I, like many Cuban entrepreneurs, want my business to be a good one, successful, and for customers to like the place. For that, you have to invest a ton of money. On this trip my goal was to learn about administration, and they have a lot of experience in that. I wanted to build a new bar and in Miami I found the solution. At places like Golden Fig, Bread and Butter, and the nightclub Bodega, the décor solution was recycling. They used rusty fences, old stained mirrors, and wood that previously was used for something else; materials that, in places like these, with a good design, acquire another nuance and look really good. With that inspiration, when I arrived in Cuba I set out to find these materials, and in no time at all—and with very little money—I now have the bar set up.

Valdés Jazz Club, a fusion of flavor and melody