The Catholic Church in Cuba is a historic institution, built on the very foundations of the archipelago’s culture. Established as the official religion with the arrival of Spanish colonizers, for four centuries it maintained control over the practice of faith, until Protestant and evangelical denominations began to make their appearance, and a lay republic was founded.

Before 1959, Cubans’ identification with Catholicism was reflected among some 72.5 percent of the population, and after the social changes brought by the socialist Revolution, only estimates and scant studies of a limited scope have been available. Some of these studies say that more than 80 percent of Cubans claim to believe in God, and just 10 to 25 percent of them describe themselves as “Catholics.”

As one of the roots of the nation’s founding, Catholicism gave way to more autochthonous religious expression by Cubans: a syncretic fusion of Christian doctrine and African deities maintained by black slaves. Today, we can talk about African-based Cuban religions as a result of that fusion.

Recognized as just another religious denomination, with full rights like any other, the Catholic community includes some of Cuba’s most representative artists, intellectuals, leaders and thinkers. The Catholic Church is an important mediator in managing international and internal conflicts of the country’s government.

75 percent of priests and nuns dedicated to pastoral work are foreigners. 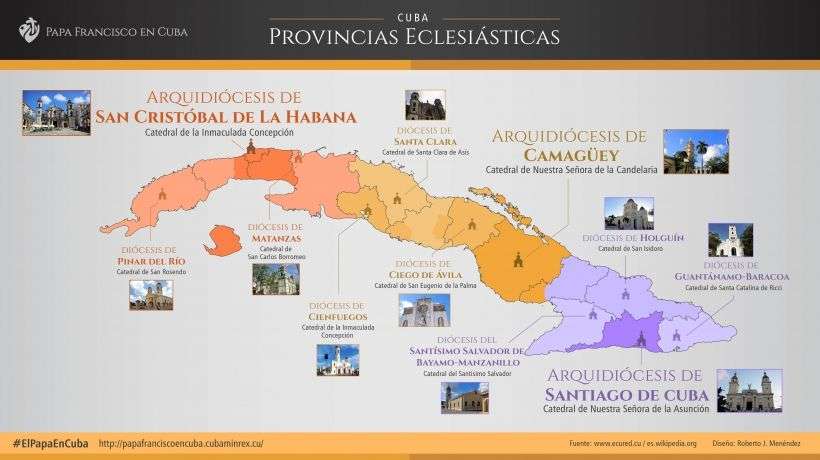 Three popes on a small island

Despite its small geographic size and the relatively low rate of Catholic Church membership among its people, Cuba has received three popes in the last 17 years, as many as Brazil, the largest Latin American country, which has a Catholic population of hundreds of millions of people. The uniqueness of this archipelago has been felt during each one of these visits:

For five days, the first pope to visit Cuba in five years of Catholic presence marked a turning point in the transformation of relations between the Church and state and in Cuban’s personal lives. Welcomed with much jubilation, John Paul II pronounced memorable words for history, such as when he said, “Cuba, take care of your families so that you will maintain a wholesome heart.”

Benedict XVI (2012): THE MAN WHO BROUGHT BACK HOLY FRIDAY

As part of his third apostolic trip to Latin America, German Pope Joseph Ratzinger visited Cuba to celebrate the 400th anniversary of the discovery of the image of the Virgin of Charity of El Cobre, Cuba’s patron saint. In addition to being apostolic, that trip also provided support to the Church’s efforts to achieve the release of Cubans who were in jail for political reasons, and it brought the most talked-about result among everyday Cubans, which was the restoration of Holy Friday, the last day of Holy Week, as a holiday in Cuba, after more than four decades.

Francis I (2015): THE POPE WHO MIGHT GET Raúl Castro to pray again

Very special moments were experienced with Francisco in the archipelago. The Church’s role as mediator in the restoration of diplomatic relations between Cuba and the United States was received with joy and gratitude by almost all of Cuban society. During his visit, the good relations between the Cuban government and the Vatican were evident, having been described by President Raúl Castro in a comment about Pope Francis: “If this pope keeps going like this, I’ll go back to praying, and I’ll return to the Church.”

A black Virgin watches over Cuba

The Virgin Mary—which appeared in the Bay of Nipe, in eastern Cuba—is the religious icon most venerated by Cubans. The Virgin of Charity of El Cobre is Cuba’s patron saint and a symbol of Cuban identity. Her sanctuary in the eastern town of El Cobre, is visited by pilgrims who bring offerings, as an expression of a particular closeness that islanders feel to Mary’s maternal figure.

Cuba and the Major Leagues