A good school in the Street 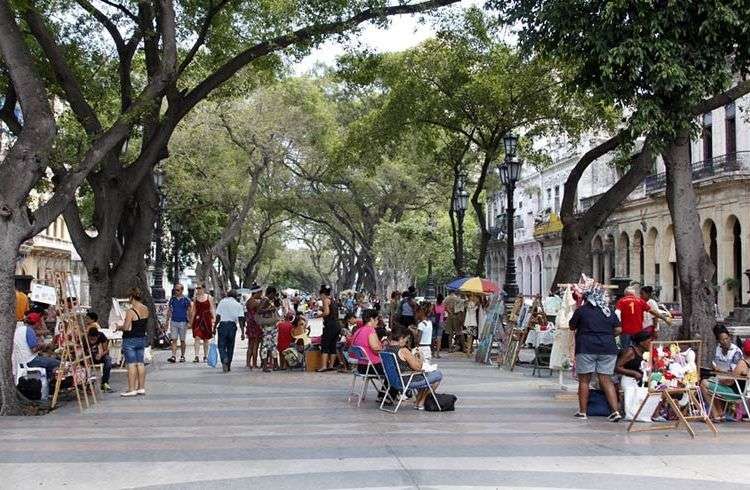 Cecilio Avilés is the promoter of Imagen 3, a project that combines music, plastic arts and design. It brings together about 200 artists in the middle of the street and they offer free workshops mainly for children and the elderly while they exhibit and sell their own pieces.

The project is held on weekends, in the emblematic Paseo del Prado Avenue, the border diving two of the most densely populated neighborhoods in Havana. Under the trees, there are children drawing and learning origami techniques and grandmothers knitting bobbin lace.

Imagen 3 offers three different variants: entertainment so that people have fun learning through culture; and learning for developing their own business in the self-employment sector. The third one is through self-discovery and improvement of people’s artistic gifts.

Yet, that’s not all. In addition, “in the workshops we try to encourage mostly in children popular education as for instance respect to diversity, social inclusion, the concept of gender, and racial, interethnic or generational aspects”, explained Cecilio.

Hundred Cubans take part in these events, including more than 300 children from nearby neighborhoods and even farther. Ania Lamas leaves home at 8.30 am to be able to be at the workshop at noon. She is hopeful that little Jonathan, 8 years old, will develop his talent, “teachers say he’s got artistic talent”, she says proudly.

There is also room for grandparents, “in this area they represent 15 {bb302c39ef77509544c7d3ea992cb94710211e0fa5985a4a3940706d9b0380de} of the population, so we also have space for them and we try to help them express themselves artistically and to teach them techniques that would help them make the most of their time”, commented Cecilio to OnCuba.

Caridad Alfonzo, retired from the Arms Forces, wants “to learn things I didn’t learn when I was young because I didn’t have the time” and added “I’m learning to knit bobbing lace for my personal satisfaction above all”. Next to her María Victoria López is knitting as well; she comes every weekend from Artemisa province, 60 kilometers from Havana.

From home students bring their seats. They form a circle around artists and as they get the theoretical knowledge they put it into practice with their hands.

Maira Yanesis one of the plastic artists giving the workshops. “I have seven regular students but many people join us as

they walk by and I also teach them”, she said and explained that “teaching is part of my personal achievement and it nourishes me spiritually, so I put all my love in it”.

Artists also “get something in return from the community, most of what we do in the project is marked by syncretism not religious but human, that anthropological aspect in which whites walk like blacks and blacks speak like whites, that’s Cuban mixture”, stated the director of the project.

Finally CecilioAvilés noted that “the real projection of an artist is in his capacity to have a positive impact in another human being and when you do that with hundreds of human beings the feeling of joy is huge, there is no better payment for a true artist”.