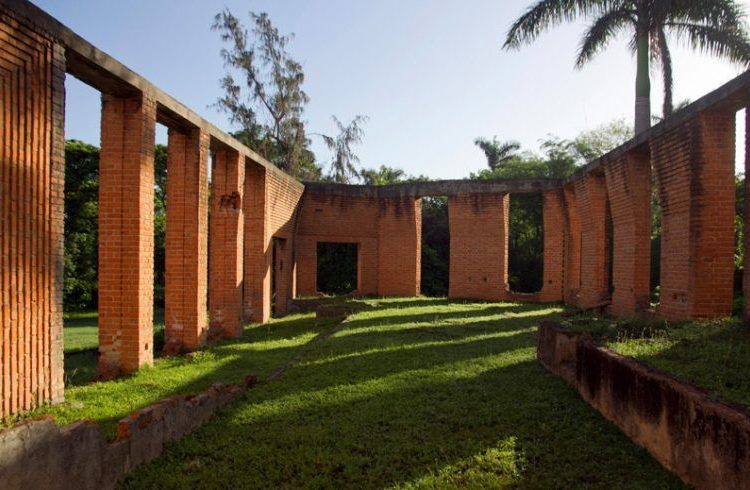 “Architecture has to be poetry.”
ROBERTO GOTTARDI

It was the 2000s. Entering the University of Arts is a one way-street. I imagined the scene a thousand times, but was unable to calculate Elsinore,1 the brick citadel, one of the art schools built by the Revolution in a poetic exercise of power: over the vanquished class, over a way of understanding the world, history. I will know that later. Now my intuition guides me through the twists and turns, I discover it is impossible to not believe in utopias within these walls. It is a personal rite, of initiation in the Faculty of Theater Art.

“Architecture has to be emotion,”2 said Roberto Gottardi,3 the architect. And Elsinore consumes you, takes your breath away. It urges you to grow and be part. Brick after brick, palimpsests of senses, in so many directions: because the idea projected over a metaphor…, because these spaces that contain the universe…, because labyrinths of medieval inspiration that become explosions of green, of light, from the large windows of the classrooms….

A parenthesis: during the classes in these classrooms-light the body hurts. It doesn’t matter that the professor is creating the foundations to dynamite the limits; one has to be a contortionist to get to the notebook. The body hurts. The reasons for the discomfort take the walls, like that one with the stain of humidity. And one starts to outline a: who could have thought…? Ignorance is daring.

The learning periods succeed each other. Going to the school, its history, form part of the fondest of these periods. I don’t remember dates, but the sequences crowd into my head: that agile man, determined, climbs one step after the other, checking for cracks. The incarnation of the myth marvels me. It is Roberto Gottardi. I always see him at a distance. A friend who is studying architecture has told me that he is the best teacher. I don’t find it difficult to believe him.

On the other hand, it is difficult to understand. It’s the beginning of the beginning, the 1960s. It’s been less than 10 years since Gottardi graduated and he has never had the absolute responsibility of a project. That is about to change. Ricardo Porro4 calls. In Cuba they want to build the world’s best art schools. Vittorio Garatti5 joins the adventure. Gottardi picks up the glove. One has to design, build, teach…everything at once, at the same time, with no mandates, prefigurements, budgeted ceilings, without the possibility of importing materials – that is the reason for the bricks, for the Catalonian cupola, the local solutions. The imperative? Creating beauty (that will not be univocal or unidirectional), to make it livable, reachable. In these buildings, the first lesson for those would-be artists.

Gottardi’s way of walking brings back that history – that seems unreal – of a system of large windows, frames, seats that he wasn’t able to install; of a play on light, on the concept of theater, thinking for the theater and its makers, which he did not finish crystalizing…. Because in 1965 the works are stopped: they are not useful.

And, however, eras are brewed within these walls in the following decades. The faces change, the times. Here one reads, thinks, speaks, acts, writes, draws, touches, dances…one creates. There is a rejoicing in the privilege of studying in this our Elsinore, warm, unfinished…unquestionably alive.

The classrooms located outside the structure were originally for theoretical exchange. Gottardi (the designer, the inventor, the architect) – who based himself on the context to outline any new project – understood theater like a mixture of theory and practice. A sector discovers the other while walking, thinking. That’s the reason, returning from the spaces-light, for the workshops that make possible the production. And, later, the seats for the representation, which were not completed. A community, an objective: making theater. In the walking, that is to say in creating, dialoguing, confronting, flowing, concurrences that make it possible. 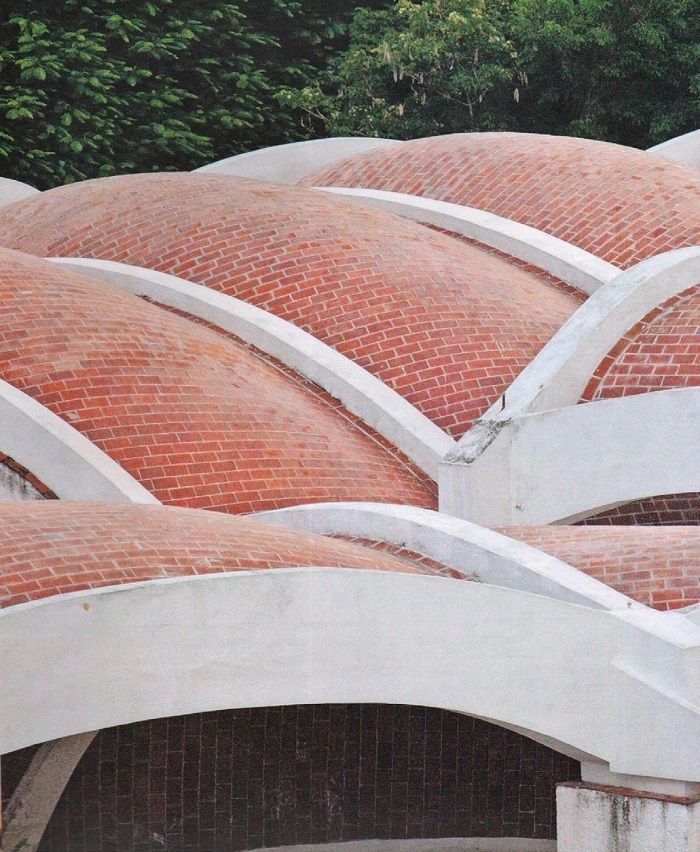 When I started seeing Gottardi in the hallways or small squares, the schools were no longer a mystery, a personal history, a pain in the body that has a name: neglect. There was talk of finishing what had been truncated. The longings were rebuilt and in 2007 Gottardi designed new stages based on a new conception of theater: the times, the art, the man, had changed. So much strength seems necessary to come back and change everything!

In the midst of the rejoicing, the moving.6 Another building, without its own ghosts, without the capacity to contain the world, would receive us. The sound of bodies against the wooden stage floor, the bata drums and the inconsolable cry of an essay, the Joplin that helps to finish a wardrobe…would not compete as an extension of teaching.

The following generations wanted to know how it was to inhabit, learn the city-castle. And the desire to pass it on. And the certainty of knowing it impossible. They took some workshops, returned for some festival…. In that evolution, the myth about the schools and their architects grows: recognitions, prizes,7 declarations of National Monument (2013), a documentary (Unfinished Spaces, 2011) get here…but the new project did not get to be executed.

And Elsinore persists, as before, already without Gottardi. We return to the palimpsests of the senses that succeed each other, tireless: I think of my generation, one more, who lived the dream of a citadel designed and built by young people; of the righting the wrong of the path, which announced the small streets guarded by bricks, that corner that hides a door, that window that announces the abysm; I think of he who conceived that world for the theater, which today would have been another; and I think of those who laid brick over brick to give shape to the idea. And the finished third of a school, mine, yours, abandoned to its lot, hurts, like the body bent over the notebook at another time, like the generation that doesn’t inhabit those spaces. 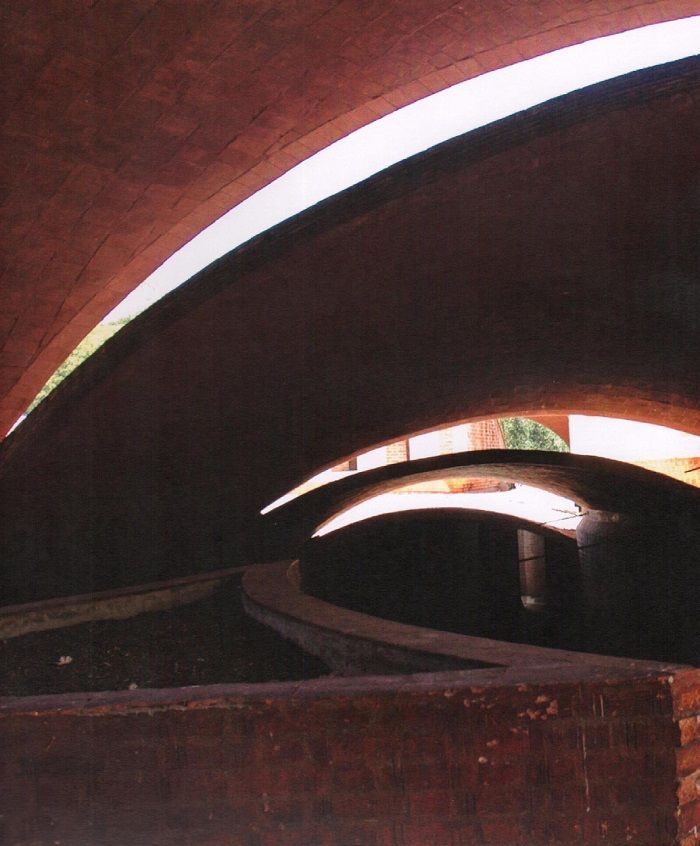 _____________________________
1 Name by which the Theater Art building is known and which was conceived by Italian architect Roberto Gottardi. It refers to the famous castle of Kronborg, in Elsinore, Denmark, where the story of Hamlet, by William Shakespeare, takes place.

3 Roberto Gottardi (Venice, 1927-Havana, 2017) graduated in 1952 from the Higher Institute of Architecture of his native city. He was hired in Venezuela in 1957, where he would coincide with architects Ricardo Porro and Vittorio Garatti. Three years later he arrived in Cuba with the order of building the art schools in the exclusive Havana Country Club, summoned by Porro. Gottardi would stay to live his life on the island.

4 Ricardo Porro (Camagüey, 1925-Paris, 2015), Cuban architect, was the coordinator of the art schools project who would add Gottardi and Vittorio Garatti to the process. He was in charge of the Visual Arts and Modern Dance schools.

5 Vittorio Garatti (Milan, 1927), Italian architect linked to the work of the art schools, responsible for the spaces that would be devoted to Ballet and Music.

6 In the words of Deputy Minister of Culture Fernando Rojas: “in 2006 the faculty of theater was vacated and in 2009 the construction work began, consisting in the repair of the part of the ceilings of its roofed area. The works have been carried out very slowly and some of them have not been able to be started for lack of funds. Before this, the intermediate-level Dance School and the Faculty of Visual Arts were able to be repaired,” quoted from Las escuelas nacionales de arte de La Habana (Michele Paradiso, 2016).

7 In 2012, the Italian government granted Gottardi the Vittorio de Sicca prize in the category of Architecture, an award he shared with Garatti and Porro. In 2016 the architect of the theater art school would be recognized with the National Prize for Architecture of Cuba.