Alina Roberts: “I’m going for it”

Jorge de Armas
in Technologies of Communication and Media
0 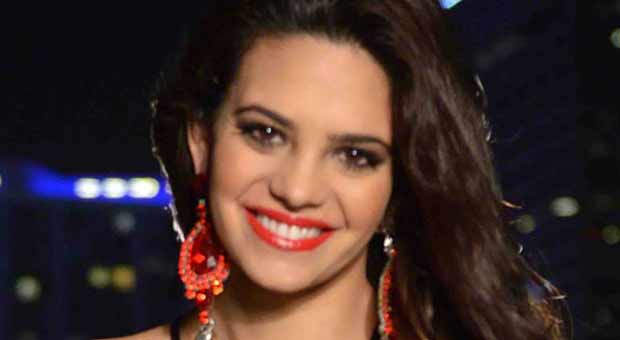 I confess I arrived full of prejudices, nothing prepared, but with a little bite in the stomach that somehow turned into a feeling that I was expected by something different. I come from a time when fashion, television, pretty girls and all this combined was dismissed as superfluous, banal, commercial or frivolous.

I knew that beauty was not at odds with either the way of being and with the intelligence of the people, but still educational doctrinaire sense forced me to think that from intelligence you choose other ways of being or livelihood. Waiting so long for Alina Roberts, a Cuban beautiful model and actress, who embarks on the reality show Nuestra Belleza Latina on Univision, for her to shatter a mindset of nearly forty years, has been worth it.

Conversing, if at first she dazzles you with her beauty, her voice, firm, calm and deep, you’re forgetting her face and her curves and then Alina appears, a woman who when speaks, when says what she thinks is even more beautiful, in a way that reconciles you with your stupidity and prejudice.

I, who was there without any preconceived questions, because I did not believe the story, had to let her do the talking. And as to leave no doubt, the first thing she tells me that “what interests me is to represent a Latin woman, but not its stereotype. A woman like me, Latin and Cuban, intelligent, persistent and thinking ahead. My world, that frivolous entertainment world, requires a big commitment and is very easy to fall into the temptation of the easy. It has been difficult, but I had to be the one to open doors and that’s how I see it”

“One of the fixed ideas in the vision of today ‘s Latin woman who lives for her body and thanks to it gets a job or a husband , I intend to let the world know what we made ourselves and you cannot judge a community or a prototype of woman so lightly , simply on stereotypes. We must deepen the values she has and defends, in her education, how she has been raised. We must and I want to fight that model of shallow woman. There is not a single type of Cuban or Latin woman, each one is different because of their upbringing, their expectations and their view on life”

The conversation , because in the end that’s what we had, turned to the harshness of reality TV , to how exposed participants are, how they try to get to the most vile part of them, but once again , before I cannot even say what I think , in the most Cuban way of interrupting she starts;

“TV , especially a reality show as this in which I participate is quite dangerous because the essence of the program is to take you to the limit and, unfortunately , when you’re on the edge, sometimes they take out of you as a human what you don’t want to show . In a normal environment you know to control yourself, you can take a deep breath; think about what you say, anyway. But in a reality show, when you have a camera in front of you and a producer lurking, often you say what you do not want and do things you might regret later.

“I wish and never have to regret something I do or say, but if that were the case, I’ll take it as experience for the future, to learn from my mistakes and be able to react in a better way.

“This contest is a great opportunity for my career and I have to know how to profit from it. There is much behind what my pictures show. Over my desire to be an actress, my professional aspirations, too – and this is very important to me – I want that everything that I do, a Latin women, but especially Cuban woman feels identified and proud that there is a representative who also is Cuban and Latin like her, who will give the best of herself.

“Although this is a Latin American multinational competition, it is undeniable that each country is identified with its representative. I wish I could make Cubans see in me a worthy representative and be proud of me.

This woman makes me thirsty, I have to get up and take something, I have at hand coffee, tea and water, and I attacked the water. Between her voice and her laugh, and the way she disrupts everything I had thought, six in the afternoon of Miami gives way to a reddish sunset, those that you sense the sea everywhere, and you’re on another island which is not yours, but Alina makes you forget that at times.

“Jorge, it is necessary to understand that the Latino community is growing impressively in the United States. Beyond nationalities, politicians are turning to solutions, reforms and laws focused on Latinos because they know of our growth, our strength and our roots. We are a fighting people. I’m talking of women about because I am a woman, and because the proportion of Latin women in the United States is seven for every man.

“As women, depending on our experience, education and aspirations, we have earned the respect of everyone as professionals. Latinas have reached the top, to lead large corporations and the world of politics, not just in the states; I’m talking to Federal level. And what can I tell you of Cuban women? We have the will, we do not sit and fold our arms and wait for anybody to knock at our door with solutions, we go out to look for them and I want to be an example of this.

“I want to be recognized for my work, for my record. I aspire to achieve followers of my work, but not only from the public, also from professionals who want to work with me and value my work and what I am. That is my goal.

She talks to you and seduces you. She gets to you with her clean accent and safety of what she says, no hesitation, no breaks and you have the certainty that it is not a pre prepared speech. Alina speaks from deep inside, and transmits the certainty of very clear and thoughtful ideas.

But when her face really lights up, and you feel the more the strength of her words is when she talks about Cuba. She has a very special way of pronouncing ” Cuban ” or ” Cuba ” She does it with her mouth full , conveys much to say , it feels different, between her beauty and my nostalgia , when Alina says ” Cuba ” I listen to it with an echo.

“I’m a Latin American actress, Latino and eager to work on projects across the continent, get to Hollywood, for who I am, my values . In my profession I want everything, I aspire to everything.

“But I have to say, I would love to work in a Cuban film. I want the Cubans who like film can enjoy my work. That would be one of my highest honors, more than making money, I prefer the Cuban public to enjoy me and they could identify with me.

“I know that somehow Cubans can watch this Nuestra Belleza Latina in Cuba, and though someone might think I use my body to get professional benefits, typical of these contests, I want to tell everyone that this show is not exactly a beauty contest. This reality show gives me the opportunity to show in camera, interviewing, of which I am showing three months of very hard work, so I will try to complement the business side of the show with my career.

In Miami is almost dark. Now the sky is leaden, Alina, about to enter a house for three months, surrounded by a thousand people, seen by millions, but really accompanied by herself; she does not show a single sign of nervousness. She is fair, quiet, and when she laughs it brings back memories of the sounds of Havana, fragments you heard through the open windows, portals, sheers of view, allowing you to listen.

Then, crumbling the last of my prejudices, bringing me back to reality I never wanted to see, she says:

“Above all things I’m super proud to be Cuban, and I’m sticking to it. In this contest, in life and in my career, as we Cubans say, I am going for it”

Baseball in the verge of absurdity

Trading online in a “offline” country

Trading online in a "offline" country

Change of production: from cooking oil to… art

The Havana of Carlos Varela and many other Cubans