Ariadna Capiró : a Cuban who triumphs in Brazil 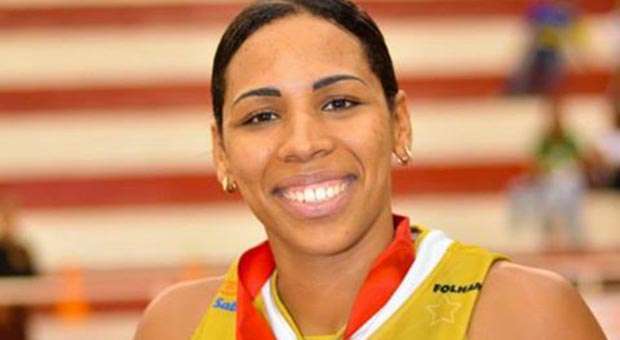 Ariadna Capiró didn’t find volleyball courts attractive. The very restlessness of her nine years needed a more dynamic sport where she had to run constantly. She began attending basketball practice where she found her passion.

She was a member of the Cuban team to the Youth World Cup in Czech Republic 2001. In the game against France she starred and not by her performance on the court. At halftime she got locked out in the dressing room and managed to get out only when the second half began. That was a memorable blooper.

Being in the national team (senior) she had the joy of a playing in friendly U.S. basketball star Lisa Leslie, Sue Bird, Diana Taurasi, Tina Thompson and Katie Smith. She took her chance and her actions earned her a spot on the team that would participate in the 2003 Pan American Games in Santo Domingo which meant a spectacular triumph for her.

Time later disagreements with the national team coach led to her absence in the most important event of the season. The sadness of the moment, endless days of self-analysis and the desire to find new motivations marked her future path. She decided to try her luck as a professional athlete. Her first foray was in France whose capital, Paris, greatly captivated her. She arrived in Brazil in 2006 with a contract for three months … and are already seven years in Sao Paulo , Mecca of basketball in the country.

The conquest of a new title was the perfect excuse to talk with Ariadna. Cheers, a little nostalgia and various dreams and goals to accomplish converge in this dialogue.

Monarch of the 2013 Paulista Championship playing for the American Basquete .

The titles always bring joy, especially when you feel you put your bit in that conquest. This is the second time I’m champion in the Sao Paulo tournament and I enjoyed it as it was for the first time. We all like to win, so right now I have plenty reasons to be happy.

In the final you defeated the San Jose club, where Cuban Yaquelín Plutin plays, though she could not play because she was injured. Are there other Cuban basketball players there?

Yes, Cubans are everywhere and Brazil is no exception, with the advantage that it is a country with many things similar to Cuba and that makes us feel more at home. Lisdeivis Víctores was who opened the doors of Brazil. After it was all a chain of solidarity among teammates. I helped Yulianne Cruz coming, and Lisdeivis supported Plutin. At this time we are four Cuban inserted in the Paulista basketball

Your passing through the Santo André club gave you the first São Paulo title (2011).

Of Santo André I have the best memories. More than a team we were a family. The trainer was very concerned for me and treated me like a daughter. It was a very good atmosphere, and that we could turn into titles. We were Paulista champions of the National League and the Open Games. They were times of glory which I hope to live again although in another club. Now, the best of Santo André, more important than all the titles are the true friendships that allowed me to have.

The first national championship organized by the LBF (2010-2011) had among its stars Ariadne Capiró : champion and best player of the tournament.

Certainly that was my best time as a player until today. To the joy of the conquered title it joined an individual very outstanding performance. I was in great shape, very focused on the games, things on the court came out well and I was part of a team where everything worked like clockwork.

However I am sure that in the future I will have so pleasant moments like that, I still have a lot of good things to accomplish in basketball.

The Brazilian basketball is going through a time of renewal with their sights set on the Olympics in Rio. They are looking for a team that blends harmoniously youth and experience. The league is getting stronger, in the tournament starting in few days there are eight players who play in the WNBA clubs and will participate. Also other foreigners with a good level of play will come. This new season promises great emotions, as there will be several teams with real chances of winning the title.

You mentioned the circuit of the WNBA. I believe several Cuban have had enough quality to be inserted into it, although so far this has not happened.

I agree with what you say. There are Cuban players who could be part of any team in the WNBA, even among current ones. The impossibility has been for lack of opportunity, but talent and ability to play in the best league in the world no doubt has existed and exists right now.

I feel a special affection for this nation, for the wonderful people I’ve met. I arrived in 2006 with a contract for three months and it’s been seven years, definitely it knew how to seduce me. In Cuba was where I learned much of what I know of the sport, but has been here in Brazil where I have truly managed to bring all that knowledge into practice. This is where I’ve matured as an athlete and as a person.

Cuba is my roots, where I come from. I lived there my entire childhood and part of my youth. I am hundred percent Cuban and I’m very proud of that. One of my big dreams is that things change so I can get back to represent my people, my country.

If they give you the possibility: would you accept it?

Sure. One of the things that make me nostalgic is not playing by the selection. I hope one day I have this possibility. It would be super exciting, especially now that I am a more experienced player. I know I would be more prepared than eight years ago when I left the team….

How did you live the triumph of the girls in the 2013 FIBA Americas Championship of the Americas?

I confess that my heart was half broken. I supported the two selections, Cuba and Brazil. The match was played in semis had me in total stress. The good thing is that both teams managed to qualify for the event in Turkey, and then my joy was doubled.

I’m a fan of basketball then my favorite male quintet will be based on them:

Something special in Kobe?

Kobe is my idol. Today there are many exceptional players, but my favorite is Kobe. I enjoy the way he plays and his charisma. Among girls the player who impresses me the most is Seimone Augustus, who plays in the WNBA’s Minnesota Lynx.

On November 25, the World Day to Combat Violence against Women and Girls was held. Do you think that sports and athletes can bring a lot to this necessary battle against inequality and violence that women and girls still suffer around the world?

Athletes have the ability to exert a positive influence on societies and their attitudes can serve as a mirror to the new generations. In this regard we must commit to campaigns and public policies that seek to change the sad realities that afflict our nation. Violence against women and girls is one of them, and should always be condemned and mostly work from any stage to eliminate it.

In Cuba , was recently created Network Sportsmen Join that with the support of the UN and the Ibero-American and African Masculinity , have successfully linked to many Cuban athletes , men and women, this struggle against violence against women and girls. Would you like to be part of this organization?

Anything for the good of society I support him , more so if it is a just and noble cause like that , and also an initiative that has its place in our island. They can count on me for this moment .

It doesn’t stop raining in Havana

Sugarcane told by the harvests

Sugarcane told by the harvests