Arruebarruena is already a Dodger 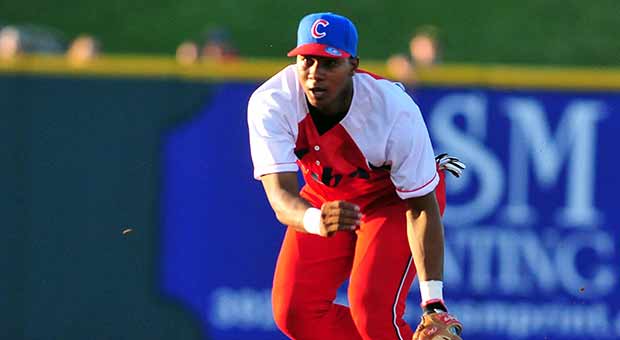 His surname, too long, will tangle the tongue of mid Hollywood, but fans of the Californian city are already rubbing their hands to see at Chavez Ravine ballpark a potential Golden Glove shortstop.

We are talking about Erisbel Arruebarruena Escalante, who was born in Cienfuegos, Cuba, and is cousin of Ciego de Avila’s pitcher Vladimir García, a man with hands of silk and a who also owns a missile in his right arm, enough weapons to reach a five-year contract of $ 25 million with the Los Angeles Dodgers, team that seems determined to consolidate a small Cuban colony, to the point that they have sent to Florida his scout Mike Tosar, whose special mission is only Cuba.

The squad coached by the legendary Don Mattingly meets in its roster the also Cubans Yasiel Puig, icon of the side, second baseman and shortstop Alex Guerrero and LHP Paco Rodriguez, also of Cuban ancestry.

But let’s talk about Erisbel, who closed the official signing of his contract after solving several international legal obstacles and overcoming the rigorous medical examination, but he will not join the Dodgers spring camps until receiving a working visa.

For now, “El Grillo” (The cricket), as he was known in the archipelago, will remain training at the Dominican Republic, where he must work primarily on his batting, as there is little doubt about his quality with the glove.

“He has instincts and nose for the ball. He can make the routine play and the spectacular one, besides having a good arm and soft hands, values ​​that allow him to be ready to face MLB level when speaking only of his defensive skills. It c ould be exciting almost immediately, “Bob Engle, Dodgers´ international scouting vice president, who follows the talented shortstop for three years, said.

“Maybe I’m overstepping, but defensively he is like Mark Belanger,” Engle added, referring to the former Baltimore Orioles´ star shortstop, who won eight Golden Gloves and finished his career with the highest defensive average for a shortstop (977) in the American League.

This comparison with “The Blade” as Belanger was called, speaks clearly of expectations raised by the capacity with glove of Arruebarruena, who is supposed to shift Hanley Ramirez from his position, possibly to third base if the Cuban strongly burst onto the major leagues.

Ned Colletti, Dodgers´ general manager said that Hanley is “open-minded” to change position at some point, so it is sensed that in the talks about a contract extension this measure would be included, but the Dominican must prove the organization he can remain healthy after playing only 86 matches last season.

For Arruabarrena, achieving the goal of settling himself in the Big Show is a priority, but he will have to play first in the minors, where his daily evolution and adaptation to a new country and culture will be observed.

“It would not be a surprise if he had immediate impact on the club. We have long observed him in international competition, and we know that he is an excellent defensive player. He also has power and will struggle to improve his offensive game, “Colletti told the official website of the Dodgers.

In turn, Vance Lovelace and Rick Ragazzo, the best talent evaluators under Colletti ´s aegis, studied Erisbel during winter and share the view that his entry increases infield competitiveness in the Californian team.

Arruebarruena, 23, had a batting average of .276 in 437 games in the Cuban National Series, with 67 doubles, 25 triples, 27 homers and 171 RBIs, wearing the jersey of the Cienfuegos Elephants for six seasons.

He now faces a new life, the life of professionalism, where he has enough conditions to prevail, with much focus, dedication and hard work, undeniable maxims to reach the top in the best baseball in the world.