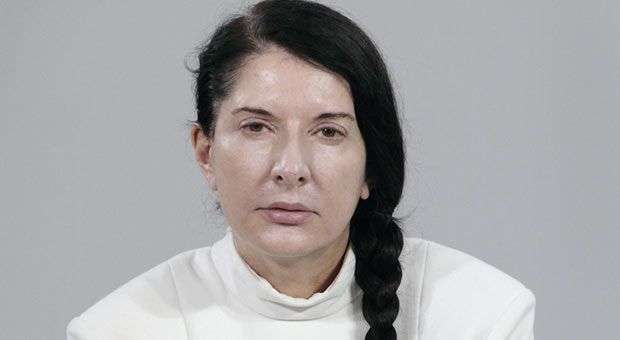 Man is ageless. Throughout his life, he is coming and going, arriving and marching, alone and dumb and full of hidden wisdom and ignorance (…)

And the best he has ever said, he has told it without words, with his own dumb and living flesh, his hands and eyes, speaking the best language he knows: the one of the speechless animals.

But Abramovic remains. Her eyes are brown. Her eyelashes are short and few. Her nose is large and strong. Her lips are pale . If she collects her hair and drop it into a soft braid, like a waterfall over her left shoulder, Marina Abramovic will look like a distressed and barely gentle peasant. However, the biographical documentary displaying the details of the retrospective sample (I’m not sure that’s the right word) of her work in the halls of MOMA, in the spring of 2010, is an extreme documentary, without mercy for weak people.

It is almost impossible not to classify as a weak before such nudity. While her assistants propose some of her major performances, Abramovic will remain for three months, six days a week, for seven and half hours, sat in the middle of a room, without getting up, with a table in front of her and a chair in the other side, for viewers to rotate.

Since the 1970s, Abramovic subjected her body and mind to devastating tests. She used o play the knife game and filmed it. Then she reproduced the tape and tried to repeat the same mistakes in the same moment and the same injuries (a performance for Pierre Menard). She took pills for catatonia and also pills for depressive patients, trying to challenge established concepts about mental illness. Earlier, in the middle of a fire star, she had lost consciousness due to lack of oxygen. She almost died. In 1974, she put in the hands of the audience objects of all kinds -some could cause pleasure and others pain- for them to use over her as they wished. There were knives, whips, and a gun with a bullet.

Marina Abramovic was born in 1946 in the former Yugoslavia. Her grandfather was a saint of the Serbian Orthodox Church, her father, a national hero during World War II, and her mother, an army officer and director of the Museum of Art in Belgrade. Abramovic remembered years later the little affection she received in her home, her mother never kissed her. That order, schedules and righteousness caused weary on her, but it is likely that Abramovic, as she acknowledges, not only owed ​​ to Communism, by reaction, the transgressor desire or rejection of the rules, but also the discipline. In the Balkans she acquired an education that she potentially could have received elsewhere, but also a strong will that the luxurious and relaxed West unknowns.

At least in ¨El artista esta presente¨ (The Artist is Present)-title of the documentary, and also of her great retrospective performance-, Abramovic not refers too much to Yugoslav society, but to her home, which seemed to be a smaller version of the Tito’s regime. Her mother woke her up in the night because she wrinkled too much the bed when sleeping.

In Amsterdam, 1976, Ulay would meet Abramovic while she was drawing a pentagram on her belly with a razor blade and then she flagellated herself. Ulay healed her wounds and found that he loved her.

They both were born on the same day and both, by their own account, were betting on performance in the same way. They were together for twelve years. They were kissing each other for seventeen minutes until both fell to the ground by the accumulation of carbon dioxide in their lungs. They lived in the countryside, between shepherds. They lived five years in a car, traveling through Europe without paying telephone, electricity or water. Ulay looked for money and Abramovic made housework.

Ulay will say that Abramovic is a person who reaches the top of the truth, a very strong definition, and Abramovic will confess that she had it all, the man she loved and they worked together. They were radical and did not commit to anything. Our twelve years, Ulay will add, were as intense and powerful as the whole life of others.

For 1988, they decided to end their relationship, visibly fallen on hard times. Each one departed from an end of the Great Wall of China and the point where they met themselves sealed the physical power and the spiritual intensity of a love emaciated up to criminality. The closed circle in which they lived was leaking. Abramovic betrayed him with a mutual friend, and Ulay, along the way, got pregnant the translator who accompanied him.

From 1981 to 1987 , they performed Nightsea Crossing: a man in front of a woman, without speaking, motionless and fasting. Three of the aversions of the West: silence, immobility and fasting for ninety nonconsecutive days; without talking, almost not moving, not eating. A woman, Ulay says, recalling his last time, as if needing justification-can sit better than a man because of her anatomy, and I got up after thirteen or fourteen days, because my ribs were pushing so hard in my spleen that I went to the hospital and they told me to stop fasting.

He lost twenty-four pounds. He was so thin that if he sat his bones cracked his skin. That empty chair left by Ulay will be occupied by MOMA viewers in 2010 while Abramovic is trying to set the performance as a central art. It was an alternative hen she was twenty, thirty, forty and even fifty, but at sixty-three she no longer wants to be an alternative.

Abramovic remained and said it was simple, the artist unmoved, like a mountain. There is no doubt she was it. José Watanabe, however, wrote: “I will not lie: the mountain is not mother, its caves are as empty eggs where I pick up my flesh and forget (…) I’ll be alone and I’ll touch myself, and if my body is still the soft part of the mountain, I’ll know I am not the mountain yet. “Watanabe’s poem, ¨Winter’s Animal¨, is forceful and possibly even sublime because he recognizes his weakness; he acknowledges, in passing, that it is literature, assumes the impossibility of conversion. All the courage of the writer lies in the attempt , and we must not ask him to succeed, he never will.

The literature flirts with the idea of ​​a vacuum, it makes reference to it, alludes it, as parody, becomes it a meta-story, it pokes its head and describes it, but it can not work from vacuum, it is contrary to its nature. It seems, however, a growing obsession. In Baudelaire the idea of ​​boredom is a warning , and in Brodsky is a confirmation. Salinger -I think it was Salinger, but if is not, it does not matter, at this point the writer is already a fortuitous element, wanted to write a book consisting of one line from the beginning to the end, but a book like that can not be written. It would suffice to read the first sentence. The desire to maneuver from nothing is sterile, even ridiculous, because literature understands it as the incontrovertible repetition of a structure, but Abramovic teaches us the opposite: that there is movement even in nothingness, just that it is not feasible to all trades.

The writer can at most sacrifice a character, even an argument, but he can not sacrifice himself. As Salinger could not write his tautological novel, and ran into such impediment, he finished detained in Cornish, New Hampshire, and never published anything else. I think I understand what the anchorite Salinger wanted to tell us, but I could not say that his retirement gave him a gram of light, or added a centimeter of quality to ¨Nine Stories¨ or ¨The Catcher in the Rye¨.

To my regret, it seems to be a divorce between the lives of writers and their work, or not a divorce, which would mean a lot, but a marriage that is never exact, nor simultaneous. The space of performance is not the pages, the canvas or the stage, but the reality, the body is the tool, and what Abramovic proposed was her life as a representation, a total sample of repulsiveness and beauty. When Abramovic drew the pentagram on her, or when walking the Great Wall of China, the pentagram and the walk bring personal consequences. They open and close their coexistence with Ulay, an extreme season of love. The vigor and seduction are within her. Outside herself, Abramovic can do nothing. When she dies, her art will be dead too. They are literally the same thing.

Her performance, full of risk and action, lead us to where Abramovic actually wants to take us, to where her maturity has taken herself. They are like a curriculum, the prestige she has earned for we to give her a vote of confidence and follow her in her business. We discovered that the many times she risked her physical stability do not provoke us, all together, the fear and vertigo caused by her immersion in silence and immobility.

In MOMA, people will cry in front of Abramovic, will try to get undressed, and will meet again themselves in the mirror in a sudden way for seven and a half hours, six days a week, three months. Ulay, who seems an exceptional defeated, will tell that he has nothing to say, zero feedback, just respect. It is not admiration but respect. That’s the point. That’s what distinguishes the artist from who is not, not the fame, immortality, popular taste, not the consent of the critics, but the respect he deserves or not. More than 750 000 spectators will attend MOMA. Abramovic as a fortuneteller that translates destiny without holding your hand or uttering words, a fortuneteller who does not lie, who shows her skinny side, her body as sole support and as an offering in the vastness . People do not understand that the most difficult thing is to make something that looks like nothing, she says. And with this, well, this is enough.

Her brown eyes, her short and few eyelashes, her big and strong nose, her pale lips. Her grandfather a saint. Her father a hero. Her righteous mother. The communist Yugoslavia. The art. The artist. The woman who is the artist. New York. Us. Everything. Everything is gone. Absolutely everything is gone. But Abramovic does not go away. Abramovic remains.

MLB, an increasingly utopia for Cubans

Cunagua, the rule of silence