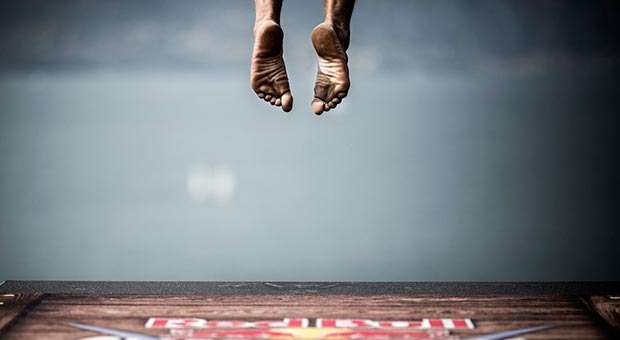 Havana will provide a stunning mosaic for the 14 divers who will jump on May 10 in the first phase of the sixth Cliff Diving World Series, a seductive, magical, almost out of a cartoon event, because of the strange mixture of spectacle and danger that they live in every show.

One after another the divers will be suspended in the air with unbelievable stunts and always, be it from the back, front, head or during turns, they will see askance the erect figure of the centenary Havana Morro and far, they could view at least a touch of Cuba’s capital, a breath of perfect facade the high and ancient constructions form with the eternal Malecon.

However, the urban landscape is the least of the complications of the “flying” daredevils, who have already shown their talents in the most incredible sceneries around the globe. Concentration, poise, technical deployment and certain amount of luck are the keys to winning the first stop of an event with a resounding rivalry, in which they face the risk of a free fall from a height of 27 meters.

In Cuba, there are not many references to this X-sport, in fact, no one of the island still has ventured into its professional practice, which requires, according to the best jumpers in the world, about two years of supreme training in order to master the essentials to survive its complex executions.

Either way, we should not be surprised by the selection of our country to host the event because managers have opted for a model of rotations in the five preceding seasons, to the point that none of the 27 host cities has had the privilege of hosting the event in each edition.

Of course, the fact of Cuba making its debut here places it in a position of absolute commitment to ensure the success of the event, a detail that would favor a hypothetical return of the competition to our soil in upcoming World Series.

The chosen venue in the capital is the Castillo de los Tres Reyes del Morro, that from its base to the sea there is a drop of 20 meters, so they have built a solid steel structure measuring seven meters. From there it was erected a 28 foot ramp, out of where competitors will perform their jumps.

“The metal frame was just set up on Tuesday this week, exactly one month after starting the work in the Morro. Now we have to work on the ramp, cover it with the logo of the event and conclude the press spaces, because the jury and guests will be in catamarans at sea. All work must finalize between Sunday and Monday so on Thursday , two days prior to competition , athletes will have the opportunity to perform the test jumps , ” Harold Rodriguez , sports manager of Red Bull for Central and South America told OnCuba, who announced that the public will have an area set up in La Punta and the Malecon, with giant screens included .

Although it has already deployed much of the needed scaffolding, they still require some work. “The mission has been a bit more complicated than usual due to the issue of materials, their transportation and after that the installation. If we would have had aluminum, for example, durable yet lightweight, the assembly wouldn’t have be so cumbersome, which required a powerful crane , the only of its kind in the country, and a lot of skill and precision of engineers and climbers that worked in it. It is worth noting the cooperation of the Port Authority at that stage for ease in moving and feasibility of work permits, “a representative of Red Bull , the main sponsor of the tournament, said.

Some 20 workers did the melting of the ramp in Antillana de Acero steel factory, while another group of 15 engineers and climbers still work in the assembly and structure, led by Austrian expert Maikol Mezner, having full confidence in the delivery of the work in due time.

Meanwhile, a group of divers will perform the last inspection in the water in days to come, and then accompany the divers in their trials and competition, which needs first aid coverage, as the slightest mistake would have fatal consequences for the athletes, but in the history of the discipline no fatal accidents are remembered.

OnCuba will give full coverage to the event with news on the final preparations, as well as inside views of the new discipline and profiles of each competitor in the first phase of the sixth Cliff Diving World Series.

Cuba Domadores to the final