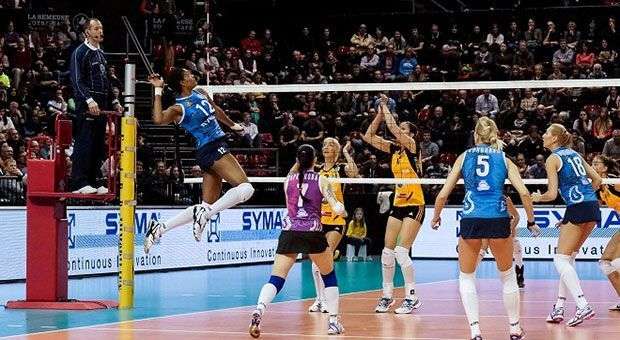 The beautiful, amazing and spectacular Cuban volleyball women players Rosir Calderon, Kenya Carcasés and Yusleyni Herrera had an outstanding performance in the 25th edition of the Top Volley International, club tournament held in Basel, Swiss city that hosts the event each year.

The recently concluded version, held from December 27 and 29, was attended by six teams; the current champions of the professional tourneys in France, Germany and Switzerland: RC Cannes , SC Schweriner and Volero Zurich in that order. In addition, to the Brazilian club Praia, Krasnodar Dynamo from Russia and the national team of the host country.

Rosir is one of the leaders of Krasnodar along with Russian stellar Lyubov Sokolova. Kenya has delighted Swiss fans of Volero Zurich since her debut with the club this season while Yusleyni plays for Brazilian Club Praia and tries to leave behind some injuries that have afflicted her.

The three of them had been part of Cuban national team that attended Beijing 2008 Olympics. Five years later Basel brought them together again, but this time as rivals. Off the court, they must have enjoyed this reunion, which was also attended by other Cubans, including one much-loved by volleyball supporters on the island: Yanelis Santos.

The teams were divided into two groups for the qualifying stage that was played by the round robin system, and then the semifinals came. The first match between Cubans was here where Rosir (Krasnodar) faced Kenya (Volero). The duel favored the first one after her squad won 3-0 (25-22, 25-19, and 25-19).

Rosir Calderon, in luxury day, led her team and also confirmed her status of the event’s most valuable player. The win was in four sets (25-19, 25-17, 17-25, 25-19) and was also the third crown for Russian clubs in the history of Top Volley tournaments. The previous successes were achieved by CSKA Moscow (1998 ) and Uralochka Yekaterinburg (2003).

The initial version of these competitions happened in 1989 with the name Uni Basel Volley International. Four European clubs participated and the monarch was the German team VC Schweriner. The first non-European squad, Camagüey, that took part came from Cuba and won the title. That happened in 1994 and is the only time a Cuban team has been present in this event.

Enjoying the mastery and individual quality of Cuban volleyball players is a great experience. Paradoxically, these moments of delight are always accompanied by longing…

Luz in the window