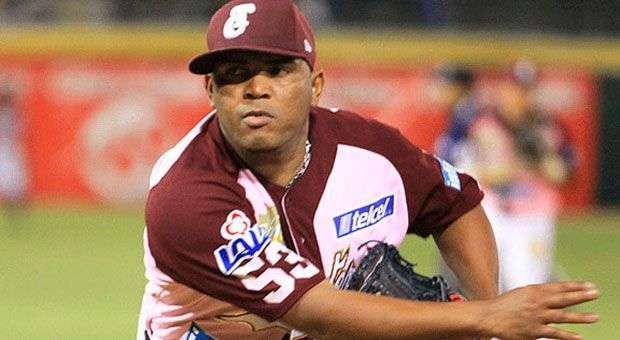 For the Cuban pitcher Amauri Sanit the recently concluded 2013 was a magical year. In September he was the champion of the summer league in the Mexican baseball with the Tigres de Quintana Roo. He was selected the best pitcher of the tournament. With twelve wins, leader, he also had the second best ERA (3.27) and finished third in strikeouts (103). He then joined the roster of Culiacan Tomateros , club he has played with in the last two seasons in the Mexican winter league .

After the regular stage in the last days of December, the performance of Sanit grabs headlines again. He has a gorgeous ERA (2.13) and perfect win-loss record (7-0, 1000), which validated him as the number one among all pitchers. His WHIP (1.03) and offensive that averaged against him only .209, were only surpassed by Héctor Velázquez (1.02 and .191 respectively).

Main pitcher in the Tomateros roster, Amauri was included in the defensive All -Star. Worth noting that in the anteroom Gold Glove was won by Matanzas Yunesky Sanchez, thanks to his average of 986 , just two errors in 152 plays.

Former Industriales pitcher in Cuban tournaments he also accumulated other relevant statistics. Equipped with an effective two-seam fastball, respectable slider and good curve, Sanit enjoyed during most of his openings excellent control. He gave away only 21 walks in 71.2 innings. He also excels in the average of its rivals with runners in scoring position: a very poor 185 and they couldn’t hit a homer out of him in any of the occasions.

The seven Amauri ‘s wins are distributed as follows : he defeated in a couple of occasions the Águilas de Mexicali and the Venados de Mazatlán, and once the Naranjeros de Hermosillo, Mayos de Navojoa and Cañeros de los Mochis. Agaisnt Mexicali he had his best day on October 26 when they left them with only one single in seven innings.

The Culiacan Tomateros finished fifth in the qualifying phase of the Mexican Winter League with a record of 34 wins and 33 losses. This position left them as an opponent at the start of the playoffs to Mexicali, second in the table with 38 and 30. Yesterday, at the start of the postseason, the first match was held and … Amauri Sanit lost. The Aguilas prevailed with a score 4-2. The Cuban could only hold four innings, allowing three runs and six hits, including a homer, in addition to giving away three walks.

Despite this setback Sanit still has time to close on a high a spectacular season. The playoffs are a best of seven, so the possibility of taking revenge is there. It remains to be seen if Tomateros manages to successfully overcome this difficult duel, which allow them to continue on the path to achieving their tenth crown, the last one reached in 2004. Arduous task in which the quality of the starts by Amauri will be one of the keys.