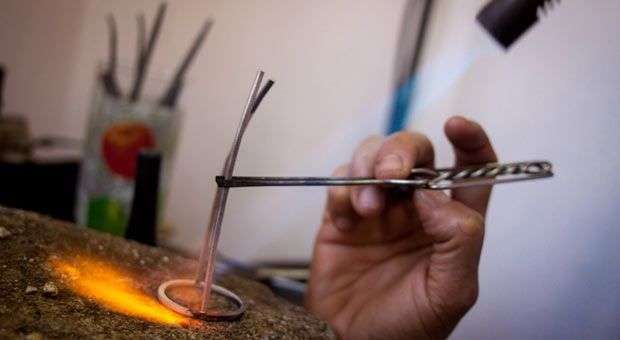 For some time the name of a woman is repeated in the jewelry exhibition catalogs in Cuba. Her work, which can be described as minimalist, stands out for the sculptural projection of the pieces, geometric shapes and the excellent combination of silver with other materials less common in this manifestation of art as wood. She is the young artist Mayelín Guevara whose style has also captivated audiences elsewhere. Precisely in 2012 she won the award for fashion design, textiles and accessories in the III Ibero American Design Biennial with the collection Havana Noir.

“At that time I wanted to reflect the dichotomy in Havana from its beautiful architecture and destruction of the streets,” Guevara said while displaying some of these jewels, made ​​with silver and asphalt, in which there is a strong influence of the Art Deco movement. “I nourished a lot from fashion, architecture and fine arts. I’m always looking and mixing things up in my head and then I create. However, in my work you will never see a building or a particular image, because what interests me is to take the essence of these other arts. “

Combining precious materials with other less expensive and more accessible, she clarifies, has been a gradual process and depends more on the opportunities and chances than on the desire or inspiration. “I work with what I have, with what appears. Silver, although it is a little hard to get, there is always, but the other materials, say precious or something, are almost impossible to find in our country. For that reason, lately I’ve been approaching the recycling that is something that is fashionable and it also opens a way to create in the face of scarcity. If I see a seed and I feel that I can use it as a jewel I don’t discriminate. Now, for example, I’m experimenting with vinyl fragments, let’s see what I get there. I like the idea of ​​mixing silver with materials that are not valuable. You see grace in all, where am I going to stop! “She exclaims with good humor and naturalness that characterize her.

“Sometimes people think I’m half crazy because I make jokes in places that are supposed to be very serious as exhibition openings, but I do not like those places as solemn and try to lighten the mood.” But that nonchalance is not only manifested in public places, the names of the series also show it: “My first collection was called Move along, a word that police say to gay groups when they stay for long in one corner of the street, as it was formed by circles the slogan came handy.

“I had one that was titled Dare because the pieces were something extravagant and I wanted to play with the audience saying ‘dare to buy, dare to wear them.” On another occasion I answered with my work to an artist who said that my work was not expressing anything, that series I called Blah, blah, blah. As a result of the International Workshop of Ceramic Trends Sargadelos 2011, in Spain, I made, along the Cuban graphic designer Giselle Monzón the exhibition “To the point”, made ​​up of garments resembling coffee beans made ​​with porcelain.

“I was born in Buenavista, a popular neighborhood in Havana and I cannot forget my surroundings, let go of my roots. Since I’m so spontaneous and fun, I like that the names have to do with my personality, I do not want them to be complicated but funny and attention grabbing.

“Sometimes one’s own life circumstances, even difficult situations bring me inspiration. You know that we  Cubans laugh at our troubles and then I was going wrong in love and said “Hummm it doesn’t add up for me,” which is a phrase used a lot in Cuba and I decided to make something from it . I thought mathematics, geometric figures and as always I was terrible in that subject, I began to create circles and quadrilaterals and positioned them in crazy ways. Thus, came “It doesn’t add up”. I recently came out with “The noose around the neck” , which also refers to an expression we say usually when we are in tough times and chose to group multiple pieces made with rope and silver inspired by African jewelry that I really like. “

“I will not starve”

After several years shaping the metal, knowing it, Mayelín realized she wanted to forge artwork. She was no longer interested in mass production or repairs, she is now dedicated to create, to dream and that makes her very happy. However, she doesn’t work only to expose her pieces for even she feels love for them also needs money. “I do not intend to leave them in the house gathering dust, I take pictures to remember them and then sell them, they look better on the body of others. I decided to make art but I will not starve since I have accomplished that people will recognize my work and come to buy what I do. It has been a difficult process but we are already seeing the fruits “.

Although the public, especially the Cuban, sometimes shows reservations on her work by presenting new elements, events such as the International Crafts Fair (FIART) and Art for Mom held each year on the island, and in which Mayelín markets her pieces, have shown her that people have to propose new trends, educate. “I saw that when they first look at them strangely, but then come to browse and see what materials are made, ask for their durability and I explain them. It’s interesting because in those spaces an amazing exchange is generated “she refers while showing some of the digital images of those jewels that she no longer retains it for some time decorating the body of customers.

“Women can be goldsmiths”

“Over the years I discovered that in addition to financial need, which led me to the jewelry it was rebellion against my family. I did not want to be like my mom who is a housewife; I wanted to get away from that. Usually it is men, who are engaged in jewelry, but I liked it and I think that like other women I have shown it is something we can do well. Also, I have tremendous strength in the hands, I can knockout anyone.

“I started in the 90 ‘, when the so-called Special Period. I was having a bad time economically, I approached a man who lived in my neighborhood and made metal objects to sell. I started welding ringlets with him and he paid me a peso. Then I set up my own business repairing jewelry, which is one of the hardest things in this job because you have to work on something that is already done. Later I ventured to make some clothes, I got closer to the workshops of the Academy of Fine Arts San Alejandro and I realized that the jewelry was much more than repairing. I realized that it was much easier to create and profitable for me and that made ​​me feel more comfortable, confident and relaxed. This work requires great physical effort, it is exhausting, so you have to like what you do “.

But although it is said in a few lines, find that path was not a matter of two or three days. As she says she stumbled a lot before finding it and discovering it. After finishing high school she graduated in Telecommunications, later began to study history at the University of Havana, found no satisfaction in any of these topics.

Today she spends many hours creating in her small workshop, during the day is dedicated to the jobs that require strength and at night, when fatigue overwhelms her, experimenting with more docile materials. These days, in fact, we have the opportunity to see several pieces of her own, made ​​with recycled objects, as part of the exhibition Jewelry with alternative materials at the Museum of the Goldsmith, located in the historic center of Old Havana.

And as new ideas begin to flutter already in her head, this time related with jewelry pieces that include fragments of sets like chopsticks, lay and Yaqui-it’s time to conclude our conversation. For the record, she agreed to this interview because there were no video cameras! “Girl, though I am so outgoing, that of speaking on television troubles me a lot.”

Havana and its salt shortage

Havana and its salt shortage

From the container to the consumer: hurdles all the way