Miami-Dade County is the most exposed to the pandemic. Still, local authorities don’t want to withdraw the plans to return to normalcy. 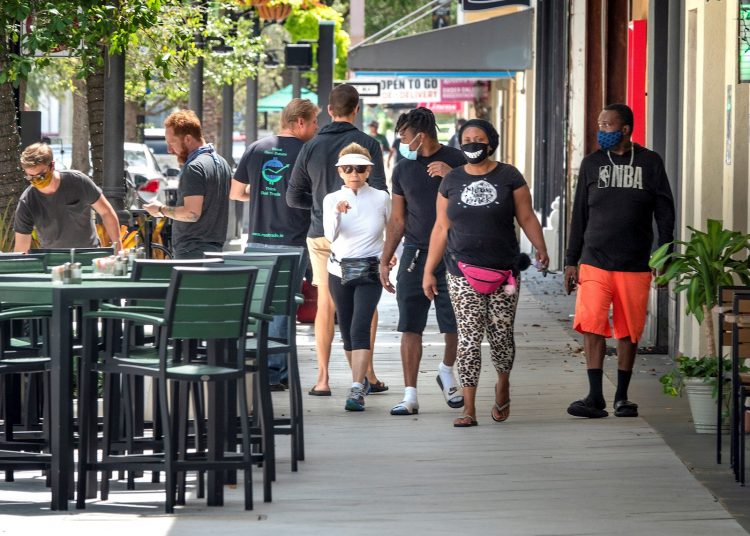 Despite the increase in COVID-19 cases, compliance with protection measures in Miami is irregular. Photo: Cristóbal Herrera/EFE.

Florida Governor Ron DeSantis has decided to continue the return to normalcy of collective life despite a brutal increase in the COVID-19 pandemic: more than 3,000 dead and 80,700 confirmed cases. In South Florida, the decision has been seconded by the mayor of Miami-Dade County, but has been received with great caution by the mayors of Miami and Miami Beach.

“Now there is no going back. If we remain paralyzed, commercial activity falls apart and merchants have already lost too much. If people maintain the collective regulations of distancing and protection like the facemasks, we will be able to continue,” said the governor at a press conference this Tuesday.

However, Miami-Beach Mayor Dan Gelber added that while he does not plan to close the beaches again, he will be relentless with the application of security and containment measures. “The police will be particularly vigilant and will take very seriously the compliance with social distancing and the use of facemasks in closed areas. We cannot in any way continue to break the regulations of coexistence,” he said.

His colleague from Miami, Francis Suárez, is of the same opinion. He refuses to go to phase 3. “You know that I already wanted to open the city. But the numbers are very dangerous and there are still reasons to maintain some protection measures,” he emphasized at the same press conference.

Florida is one of 22 states that maintains an increase in the pandemic. Miami-Dade County has the highest coronavirus impact. Last week there was a constant increase in positive cases for four days in a row, surpassing the previous day-by-day figures.

The state health service reported that this Wednesday Florida registered 2,610 new cases of COVID-19, a slight decrease compared to the previous day―it was 2,783―, which now total 82,719 cases across the state. As for the deceased, this Tuesday alone, more than 25 people died, bringing the figure to 3,018.

Since the governor began implementing the reopening, in early May, the average number of daily deaths has ranged between 20 and 30. Since June 3, there has been a sustained number never lower than 1,000 new cases.

The most acute focus of the pandemic is in Miami-Dade, with an increase of 532 new coronavirus patients compared to this Tuesday, for a total of 23,273 confirmed cases and 850 deaths. Two more than the previous day.

Despite this, in a televised statement the county mayor, Carlos Álvarez, announced that he has no intention of closing the county again or ordering its inhabitants to stay home.

“There is no going back, we are not going to close the economy just because the numbers go up a little every couple of days. What we are going to do is to strictly apply the regulations in force,” he said.

On the other hand, this Wednesday a group of protesters, the majority Cuban-Americans, marched in front of Miami city hall with banners in support of President Trump and demanding the resignation of Suárez, whom they accuse of not having properly handled the protests―some of them violent―of the past two weeks. “The mayor is an accomplice in that violence. The city police should have arrested all of them, it’s a shame that these people have vandalized businesses and gone unpunished,” one of the protesters explained to the local ABC television chain.