Governor Ron DeSantis said it is a “small but important step” for both counties that in terms of the coronavirus have faced greater and different “challenges” than other areas of Florida due to their intense tourist activity. 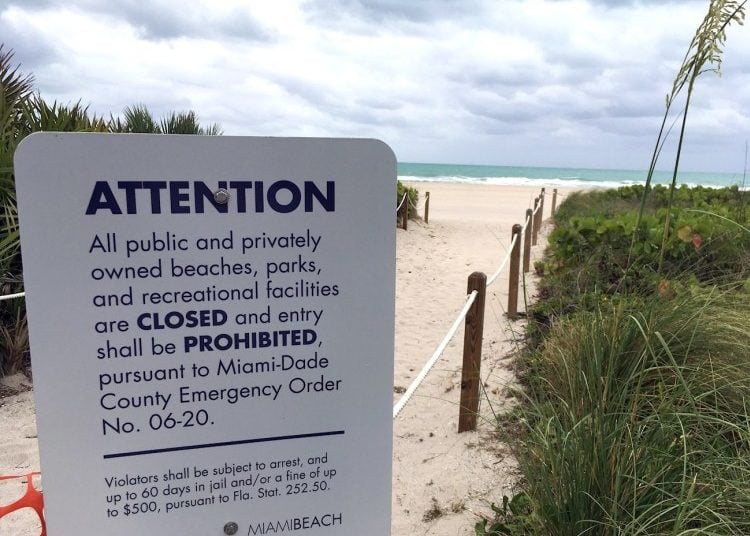 A sign announces the closure of the beach this May 14, 2020 in Miami Beach, Florida. Photo: Ivonne Malaver/EFE.

Florida Governor Ron DeSantis announced Thursday that Miami-Dade and Broward, the two counties most affected by COVID-19 in the state, which already has more than 43,000 cases, will enter phase one of the economic reopening next Monday, May 18.

DeSantis said it is a “small but important step” for both counties that in terms of the coronavirus have faced greater and different “challenges” than other areas of Florida due to their intense tourist activity.

The governor mentioned the influx of cruise ships and planes with people from other parts of the country and the world, as well as the celebration of the Superbowl, the football finals, last February as reasons why the situation of the coronavirus epidemic is worse here than in the other Florida counties.

Phase one means that most nonessential businesses and offices will be able to open their doors on Monday following special security protocols coming from the recommendations of health experts.

Miami-Dade Mayor Carlos Giménez announced at a press conference with DeSantis and Broward Mayor Dale Holness that bars, spas, gyms, cinemas, beaches, pools, tattoo and massage parlors will not be able to open yet.

Health authorities confirmed 808 new cases and 48 more deaths from COVID-19 in the last 24 hours in Florida, which since March 1 has reported a total of 43,210 cases and 1,875 deaths and suffers economically from the lack of tourism as a consequence of the pandemic.

In Miami-Dade and Broward (southeast Florida), the list of reported cases was 170 and 147 since Wednesday. As of today, they have respectively reported 14,468 and 5,988 cases of COVID-19, a disease that has caused 518 deaths in the first and 267 in the second county.

In an appeal to maintain discipline, DeSantis said “the virus is still present,” while Giménez warned that if the cases increase once the reopening starts, the previous phase will be reinstated.

The Miami-Dade Mayor’s Office has made a guide for “the new normalcy” with all the instructions and specifications for this phase that is beginning, which is identified with the color yellow.

Giménez stressed that some of the county’s cities are going to take more restrictive measures than those included in the guide, such as Miami and Miami Beach, where, in addition, the reopening will begin not on Monday but on Wednesday the 20th.

Unemployment, measured by the number of applications for the existing subsidy for those who are out of work, has greatly affected Florida, where tourism, which is the economy’s locomotive, is still not included in the reactivation.

Community groups and civil organizations sent a letter to the governor on Thursday to demand that he relax the conditions to apply for the subsidy and increase the benefits and the time in which it can be received so that the state’s working families can meet their needs.

Among the signatories to the letter are organizations from the Latino community, which is very numerous in Florida and also more affected than others by unemployment.

According to official figures, the general unemployment rate in the country is 14.7%, but if only Hispanics are taken into account, it climbs to 18.9%, according to organizations such as Acción Puertorriqueña or VAMOS4PR.

The United States is registering about 1.4 million confirmed cases of COVID-19 and more than 85,000 deaths, according to Johns Hopkins University’s independent recount.