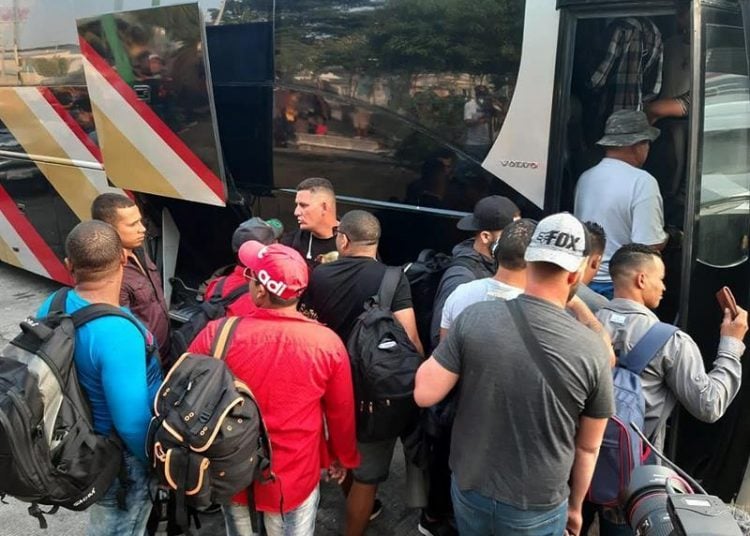 A major change to the U.S. immigration policy came into effect this Tuesday to deny asylum to those who apply for it at the southern border after having passed through a third country.

The measure could mainly affect Guatemalans and Hondurans who need to cross Mexico to reach the United States by land. Guatemalans and Hondurans together represent the majority of Border Patrol arrests, and tend to travel in families. The American Civil Liberties Union (ACLU) and the Southern Poverty Law Center challenged the decision in a San Francisco federal court.

Here are some answers to questions about the policy, how Europe has faced similar challenges and how Mexico and some Central American nations have reacted.

Asylum applicants go through a preliminary assessment called “credible fear” interview, an obstacle that the vast majority overcomes. Under the new policy, those people will not pass the test unless they have applied for asylum in at least one of the transit countries and have been denied. These people will immediately undergo deportation proceedings and will be returned by plane to their countries. The United States will cover the expenses.

The rule has its exceptions and there is also a way to avoid it.

Those fleeing persecution may request other forms of humanitarian protection similar to asylum but more difficult to obtain. Applicants must pass the preliminary assessment called “justified fear” interview, which implies that a U.S. official must determine that they are more likely to win their cases than lose them. The criterion of “credible fear” for asylum only requires that there be a “significant possibility” of winning.

There are other disadvantages. Unlike asylum, those who achieve the status of “suspended deportation” or are under the protection of the United Nations Convention Against Torture can’t bring relatives or have access to naturalization. The convention against torture envisages the possibility that the person is sent to a third country where he/she does not face torture or even that he/she is returned to his/her country if the conditions improve.

The new policy also allows exceptions for victims of “a severe form” of human trafficking.

How has Europe faced similar challenges?

The European Union applies an internal third country system. Asylum applicants must ask for protection in the first EU country they have reached. For example, if it is determined that an asylum applicant in Germany first entered Italy, that person could in many cases be returned to Italy to process the application from there.

This system was temporarily suspended in 2015, when around a million migrants entered Europe irregularly, mainly after crossing from Turkey to Greek islands, to then continue their journey through the Balkans to central and northern Europe.

There is also a debate in Europe about which nations that do not belong to the bloc can be considered safe third countries. Turkey was considered a safe third country under a 2016 agreement that helped reduce the flow of migrants to Europe. However, human rights groups questioned whether Turkey offered adequate protection to refugees.

To date, attempts to create a comprehensive list of safe EU third countries have not materialized. The members of the EU individually adopt their respective decisions.

What do Mexico and the Central American nations think?

Mexico has resisted U.S. attempts to make it a safe third country for people fleeing persecution and heading for U.S. territory. On Monday, Secretary of Foreign Affairs Marcelo Ebrard said that Mexico will not negotiate on this issue without authorization from its Congress.

As part of an agreement that avoided the threat of U.S. tariffs, Mexico accepted, however, that Washington expand a program whereby thousands of asylum applicants from third countries are forced to wait on Mexican soil while their applications are examined in U.S. courts, which are flooded with cases. Mexico also assigned some 6,000 members of its new National Guard to support surveillance against immigration.

According to the agreement, if the flow of migrants does not decrease significantly, both countries will hold new talks on shared responsibility for the processing of asylum applications, perhaps as part of a broader regional pact.

The countries of the Northern Triangle of Central America―Guatemala, Honduras and El Salvador―have kept silent about migration and have done little except blame the political opponents (in Honduras) or campaign to warn people about the dangerous crossing (in El Salvador).

Guatemalan President Jimmy Morales was about to sign a third-country agreement with Washington, according to press reports, but the version was rejected by the president’s collaborators. However, on Sunday, the Constitutional Court blocked that agreement. A meeting scheduled for Monday between Morales and President Donald Trump in Washington was abruptly canceled.

Are Mexico and the Northern Triangle safe?

The new U.S. policy does not make it mandatory for transit countries to be safe, but Mexico and Guatemala are not, according to the lawsuit filed on Tuesday and which quotes statements from the U.S. government.

Gangs such as MS-13 and Calle 18 proliferate in the Northern Triangle, particularly in El Salvador and Honduras. The gangs act as de facto authority in large areas, where they extort money from companies and workers. It is known that gangs recruit young men by force to expand their ranks, and young women to be their “girlfriends.” In any case, saying “no” can mean losing your life.

A person can be murdered for such simple issues as walking through the wrong neighborhood, wearing the wrong clothes or riding a bus at the wrong time.

The Northern Triangle also faces high levels of poverty and scarce employment opportunities, factors that not only drive emigration but also make it difficult for refugees to lead stable lives in those nations.

ETECSA will lend balance and will charge a surcharge