In the city of Jacksonville, the use of masks is mandatory, both indoors and outdoors, for an undetermined time. It can last as long as the Republican Convention. 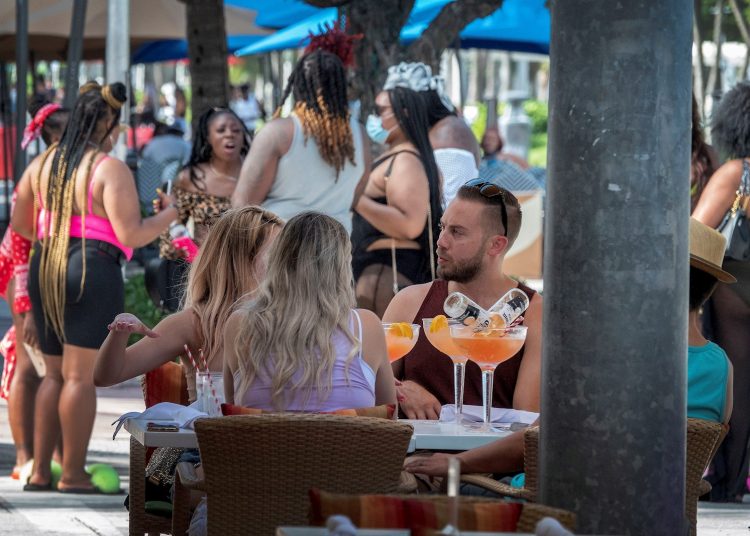 The breach of social distancing and the use of masks on the beaches, such as this one in Miami Beach, has forced their being closed in Florida. Photo: Cristóbal Herrera/EFE.

Over the weekend, 13,833 new cases of COVID-19 were detected in Miami-Dade County, the total number of infected people now rising to 35,222 since the beginning of March, when the patient registry began. The death toll has almost reached 1,000. An all-time record, according to the Department of Health.

This has led local authorities to decide to close all the beaches during the next weekend of July 4, the date on which the founding of the United States is commemorated. As the increase in cases has also occurred in other counties, and Florida is the third state with the highest number of patients (146,341) and deaths (3,447), other counties have chosen to do the same. Governor Ron DeSantis ended up having his arm twisted.

A follower of President Donald Trump, who doesn’t want to back down on business, the governor was reluctant to close the beaches again, but yesterday he ended up admitting that it was the best for the moment. “We have a very serious situation, and it is increasing. We have nothing else to do to protect the population,” he said at a press conference.

One of the reasons for the shutdown is that the number of cases skyrocketed on two occasions in Miami and Orlando after attendees of two parties in bars and restaurants failed to take any protective measures. They did not wear the masks, nor did they maintain social distancing. Some 32 people were infected. The beaches were crowded without anyone respecting social distancing.

The governor explained that one of the main reasons for the increase in cases is young people, who don’t seem to have a clear awareness of the scope of their actions. “The precaution,” that is, the protective measures, “was thrown into the wind, and then we are where we are. Between late May and early June, protests for racial justice after George Floyd’s death in Minneapolis diverted attention from the pandemic and people started feeling more confident,” said DeSantis, who also expressed concern about the situation of young people living with older family members, who are part of risk groups.

Keeping restaurants and bars open has also been banned. “The police have visited us saying that they are going to certify that these new rules are followed and that we only serve drinks to those who also come to eat,” explains Arnold, an employee of the Flanigan’s bar/restaurant in Kendall.

All bars serve some type of food, but if sales make up less than 5% of revenue they should close.

On the other hand, on Monday it was confirmed that Vice President Mike Pence canceled two campaign rallies, one in Florida and the other in Arizona, a state also with a high number of coronavirus cases.

In Jacksonville, where the Republican Convention to nominate Trump as presidential candidate will take place, municipal authorities have implemented the mandatory use of masks starting at 5 p.m., both indoors and outdoors.

The announcement does not set a deadline for this measure, but the local press has said that it could be until the end of August, when the Convention will be in session. The convention was originally planned to be held in Charlotte, North Carolina. When local authorities decided to force people to wear masks, Trump decided to move it to Jacksonville, but finally city officials also decided the same. It is unknown if the president plans to change it again.

Jacksonville Mayor Lenny Curry decided to impose the use of masks at all times after consulting with specialists from the Florida Department of Health, who noted that the city houses two important military installations: a Navy base and another one of the Coast Guard. The mandatory use of the mask is total. The two institutions will participate in the security operation of the Convention due to the presence of Trump.