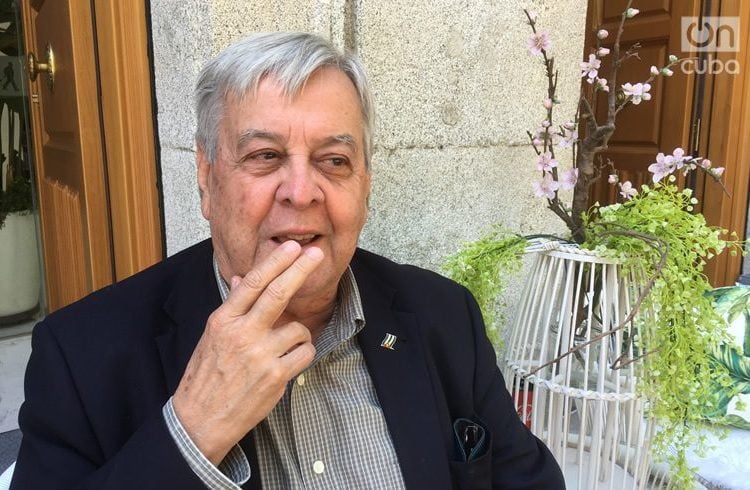 Carlos Alzugaray, co-chair of LASA’s Cuba Section, talks about Cubans’ participation in the next Congress in Barcelona. Photo: Milena Recio.

We met at a café close to the Puerta del Sol where around these days it’s easy to recognize the Cubans who have come to Madrid, in passing, before getting to Barcelona. It is special to meet here and not in Havana, where I have been able to talk many times – also drinking a cup of coffee – with Carlos Alzugaray, former Cuban diplomat, academician, independent political analyst, and an OnCuba collaborator.
Alzugaray is getting ready to participate next May 23-26 in the 36th International Congress of the Latin American Studies Association (LASA).
It is the first time this event is held in Europe. “Two years ago it was decided to diversify and expand LASA because its annual congresses were not only focused on the Americas because LASA has enormously expanded with members from all over the world,” he explains.
In fact, this year’s theme is “Latin American Studies in a Globalized World.”
“When the Congress was held in New York two years ago, LASA had around 12,000 members and now it has 17,000,” adds Alzugaray, who for some years was elected by its members to co-chair LASA’s Cuba Section, in the “half” that corresponds to the residents on the island.
The venue of these events, increasingly well-attended, will rotate between the United States, Latin America and Europe: the next ones will be held in Boston in 2019 and in Guadalajara in 2020.
LASA’s Cuba Section, which includes Cuban residents in Cuba and outside Cuba – not just in the United States – has 1,200 members and is the biggest section of the Association. This is due to a great extent to the facilities LASA has given for the participation of Cubans resident on the island, exempting them from paying the member fees and for the accreditation in the congresses.
“In relation to this subject a new problem has come up since this year the Cubans residents on the island have been forbidden to vote in the elections for the executive posts of all of LASA. It was argued that that was due to the economic sanctions that we in Cuba call blockade. It was a surprise because we had been regularly voting in the elections.”
Why does a vote by a resident in Cuba contravene the blockade laws?
We were told that that prohibition to vote should have been applied since 2005 or 2006 and that at that moment the executive board at the time had been informed that the exemption of payment was compensation for that measure that I would say is discriminatory. The LASA executives explained that the measure had not become effective until this year for technical reasons and they asked us for understanding. But there’s an element that complicates the situation: no executive of the Cuba Section from that period remembers that understanding having existed. Some even affirm that they would never have accepted it.
It seems the LASA executives have wanted to prevent an interpretation of the case based on those regulations that derive in a sanction and that could result in enormous fines that LASA could not pay. There are also practical questions like the need to use debit or credit cards for this type of payments, which in the case of the Cubans resident in the country we wouldn’t have the opportunity to do.
Out of the total members of LASA’s Cuba Section, how many live in the country and how many abroad?
A bit over half of us live on the island. Since the Cuba Section is so big Cuba’s absence in a congress would be very noticeable. That is the danger that is being run for Boston 2019. In times of Bush, when the strictest measures were applied and practically all the academic applicants were denied visas – I’m referring to the Las Vegas Congress -, the following year LASA cancelled a Congress that was going to be held precisely in Boston and transferred it to Montreal, Canada. From then on there were three consecutive Congresses outside the United States: Montreal, Rio de Janeiro and Toronto. Until the Obama administration came along and then we were able to go to San Francisco.
LASA’s attitude of moving the congresses outside the United States until the visas can be guaranteed for the Cubans, with a great financial cost, is recognized as a brave and positive attitude by all those of us who have had to do with Cubans’ participation in LASA.
LASA is also one of the spaces where Cuban academicians from all parts of the world and with all the ideas actively participate and demonstrate the development of social and humanistic sciences in Cuba or about Cuba. This has to be said. The LASA congresses every year are a showcase to exhibit that development and to promote the dialogue that exists between those of us who live in and outside Cuba, no matter the political orientation.