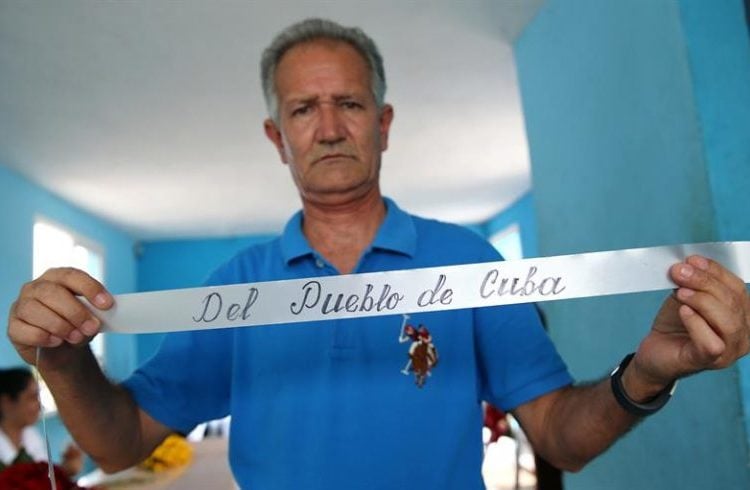 Professor Carlos Parra carefully writes the dedicatory signs on the floral wreaths that accompany the urns of those who died in the plane crash that last Friday plunged into mourning the Cuban province of Holguín, which lost 67 of its sons and daughters in the disaster. Photo: Alejandro Ernesto / EFE.

With a shrunken heart but a steady hand, the tireless self-taught calligrapher Carlos Parra carefully writes the dedicatory signs on the floral wreaths that accompany the urns of those who died in the plane crash that last Friday plunged into mourning the Cuban province of Holguín, which lost 67 of its sons and daughters in the disaster.
In a small room on the rooftop of Los Alamos funeral parlor, where the people of Holguín are crying the loss of their family members and close friends, Parra sits at the same cement table where the floral wreaths are made and carefully writes the dedicatory sign of “From the people of Cuba” on the ribbons.
Among sunflowers, carnations, daisies and roses, almost all red, this former physics professor readies two black labeling machines and fluently writes the “orders that I would never have wanted to write.”
The italic font stands out, but with no unnecessary decorations; just enough so what is special on the wreath is noticed.
“When I was a professor I was always asked to personalize the students’ graduation diplomas, that’s why each time there’s a floral wreath for a martyr on a historic date, I am asked to write it on the ribbon, but this is the first time I am involved in a story like this one,” he explains to EFE.

Parra, who worked for many years in the exact sciences preparatory school of Holguín – one of the prestigious Cuban “vocational” schools -, points out that his love for calligraphy comes from a “family inheritance”: his uncle, a self-taught painter, and his mother, also a lover of art.
The Cubana de Aviación flight DMJ-972 accident, which covered the Havana-Holguín national route and in which 111 of the 113 persons on board died – 100 of them were Cubans – took “by surprise everyone here in Holguín, which has never lived a tragedy like this one,” he affirmed.
“An accident of such magnitude in which so many people were involved had never occurred and of course it has been shocking,” he added.
Since last Sunday, when the remains identified in Havana started arriving in the eastern capital (some 700 kilometers to the east), Parra has interrupted his current job as a computerization technician in the local Garbage Collecting Services to write the dedicatory signs, one after the other.
When the arrival from the capital of the remains of one of the victims is notified, in the funeral parlor they get organized to have the floral wreaths ready, among them those with the ribbon written by Parra, which is “a free floral wreath on behalf of the People of Cuba for those persons who unfortunately died in the accident,” he specifies.
“Until now I have written 25 dedicatory signs,” says Parra, while he shakes his head listing the painful cases like that of the girl Alexia, one of the five minors who died in the disaster; of the Evangelical married couple of María Salomé and Eduardo David, among the 10 pastoral couples who died in the crash.

In the small and austere space where Parra works, more than 300 simple floral wreaths have already been made in four days, a patient and methodical work carried out by three women, which intertwine fresh flowers at an almost frenzied rate.
Beside them, another young woman is in charge of completing the phrases of the family floral wreaths with letter and ink stamps, printing one by one the characters that form each word.
This hand-made task is a show of the respect and sorrow of a city that is still shaken from the surprise and the mourning, and which has come en masse to the continuous wakes in the funeral parlor.
“I do it with the greatest tact, with the greatest care, because it is the way I have of paying homage to all those who died,” he insisted.
For the amateur calligrapher it is “an honor and at the same time sorrow” because he dedicated the floral wreath “to a person who until Friday was alive and is no longer among us.”
EFE / OnCuba