The Ministry of Public Health reported this Saturday five new cases of coronavirus, bringing the total number of infected to 2,238. The authorities confirmed 21 discharges and no deaths were reported. 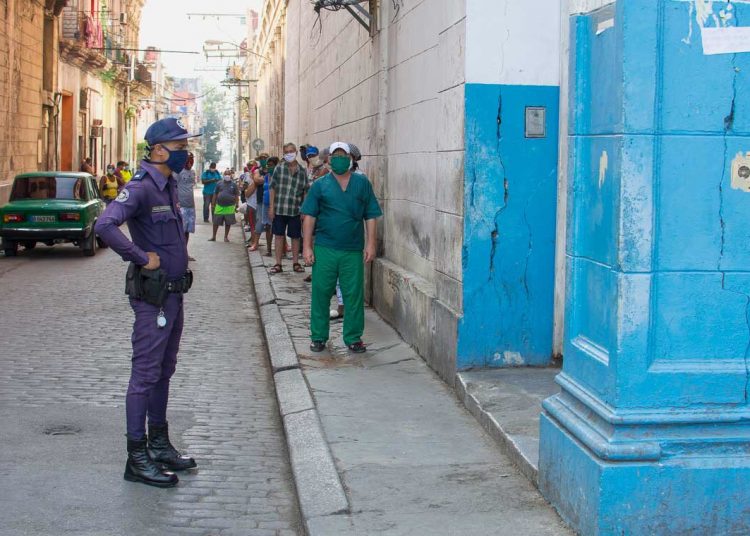 The authorities in the Cuban capital will take steps to strengthen social isolation measures in Old Havana. Photo: Otmaro Rodríguez.

The Cuban Ministry of Public Health (MINSAP) reported this Saturday that the country is on the way to control COVID-19, a disease that has caused the death of 84 people on the island, although in the most recent report no deaths were reported.

Dr. Francisco Durán, director of epidemiology of the MINSAP, specified that the nation shows a case fatality rate of 3.75, one of the lowest in the entire American continent, the result of the intense work of health personnel, who have been working for over 90 days to control the disease.

In the usual press conference on the behavior of the coronavirus in Cuba, Dr. Durán reported five new infections, bringing the number of confirmed cases on the island to 2,238, while the number of recovered patients rose to 1,923 after 21 people were discharged at the close of Friday, June 12.

It was also reported that there are five people in serious condition, all in Havana. The remaining 224 active cases show a stable clinical evolution. On the other hand, a total of 445 patients are hospitalized and there are 204 suspects, while another 538 people are under primary healthcare surveillance in their homes.

According to official sources, 131,628 diagnostic tests (PCR) have already been made on the island, 2,496 of them this Friday.

Among the newly confirmed cases, a six-year-old girl from the Habana del Este municipality in the capital stands out. Now there are 246 pediatric patients confirmed with the disease, all with stable clinical evolution and 222 of them have already recovered.

Furthermore, three of Friday’s cases were asymptomatic. According to the daily MINSAP reports, 1,192 patients without symptoms have been identified as positive, which represents 53.2% of all those infected. The authorities started reporting on this on April 9.

In this regard, Dr. Durán explained that in the last 15 days 167 asymptomatic cases have been detected; they are transmitters of the disease despite having no symptoms. These figures have been increasing in recent times, a detail that complicates the fight against the pandemic.

Divided by provinces, Havana added four cases and Matanzas one. These provinces are the only ones that have reported cases during the last 15 days.

At the press conference this Saturday, no new case emerged from the three local transmission events open in the country. Two of these foci are located in Havana (Carlos III shopping mall, in Centro Habana, and Construction Enterprise # 4, of the Arroyo Arenas People’s Council, in La Lisa) and the other is located in the Ciego de Avila town of Turiguanó.

Dr. Durán said 45 local transmission events have occurred so far, most of which have already been controlled. Likewise, he specified that the Centro Habana focus should be closed in early July if there are no more incidents.

Economic debate in Cuba: first and second planes (I)