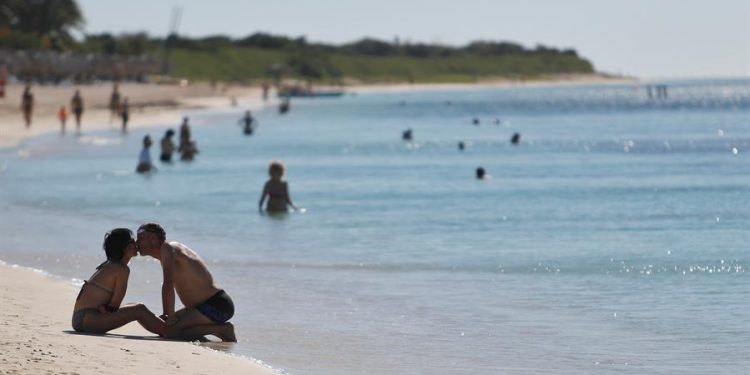 Tourists on the beach. Photo: EFE

Cuba’s Gran Caribe hotel group will prioritize the reopening of sun and beach hotels during the first post-COVID-19 recovery phase planned on the island, in which tourist offers will only be for the domestic market.

The group’s delegate in Havana, Isabel Arbona, said these facilities are highly requested by national tourism, a sector that grew last year by more than 600,000 guests compared to 2018, the Agencia Cubana de Noticias news agency reported this Friday.

Gran Caribe has 12 hotels in Havana. Among them, one of the most demanded is the Atlántico-Villa Los Pinos-Villa Mirador del Valle hotel complex, located on Santa María del Mar beach, although also reopening hotels located in the city hasn’t been ruled out, according to Arbona.

At the moment, the hotel group workers are “perfecting the strategy” established by the protocol for the safe stay of guests in its facilities, according to its CEOs.

The general director of the Plaza Hotel, Adamis Rodríguez, said that this facility should reopen with 50% of its capacity, also taking into account that there are currently some 40 rooms out of service, according to the source.

The workers of that hotel, located in Old Havana, attended to 200 guests who were transferred from rental houses during the epidemiological crisis and after the closure of the borders in Cuba as a result of the coronavirus epidemic, “an experience that allowed them to put into practice the change of work routines.”

Meanwhile, Juan Carlos Colina, manager of the Sevilla Hotel, which also belongs to the Gran Caribe hotel chain, explained that the closing period was used to “carry out maintenance actions.”

The 178 rooms are being improved and adapted to the new requirements, according to Colina, who added that they plan to protect the front desk with acrylic panels, among other health measures.

“Our task is to be ready for when the reopening happens,” the manager added.

The Cuban government reported this Thursday that international tourism operations will restart in a second phase of the return to normality, “gradually and depending on demand,” only in the northern and southern keys of the archipelago.

In accordance with the new measures for that sector, each guest will be applied a PCR test and their temperature will be taken when arriving at the island’s airports; meanwhile, clinical-epidemiological surveillance will be established in the hotels by a team of specialists.

Restaurants must guarantee physical distance between customers, and workers will maintain the mandatory use of facemasks.

Likewise, the buffet services will be assisted, to avoid the manipulation of food by tourists.