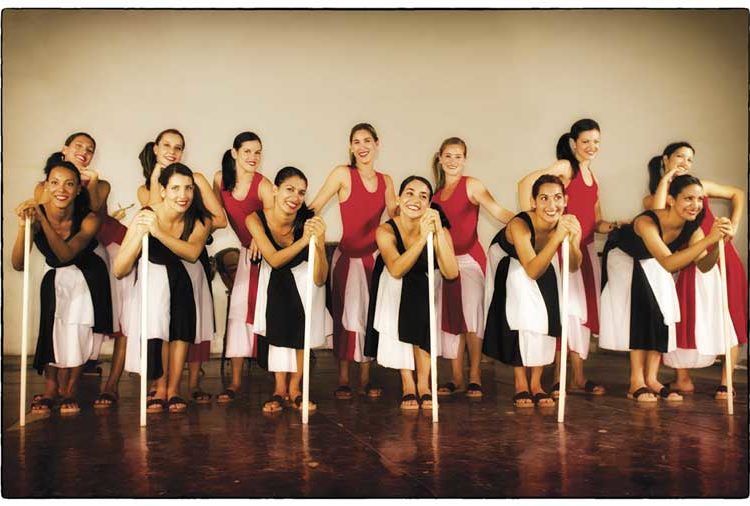 Just a few minutes onstage are needed for the spell to take effect. Twelve women dancers and four musicians captivate even the most demanding spectators with their drumbeats, sensuality and rhythm. Habana Compás Dance (HCD) is nourished by, fuses with and reinvents the basic essences of our nation.

For Liliet Rivero, the company’s founder and director, it was only a dream back in 2004.

“After eight years as a dancer and choreographer for the Ballet Lizt Alfonso, I felt the need to develop my artistic interest in fusing the essences of difference dances, and decided to create a company, along with four other dancers. This was the start of a different path, a diverse one, that has gone through several stages.”

The most recent of these stages began in 2008, when master percussionist and visual artist Eduardo Córdova joined the company. That led to the emergence of what is now the company’s artistic line, a choreographic synthesis that combines the basic elements of Spanish dance with Afro-Cuban rhythms and modern dance, using new esthetic codes. “Habana Compás Dance is the fulfillment of my dreams and those of my team. We work with a lot of love, striving to perfect our artistic work. It is the voice of my people and their ancestors, a synthesis of all of those cultures that produced our nationality. Cuba is Spain, Africa and America, all together in one big ajiaco, or melting pot: that means that we are rhythm, joy and a lot of spirituality,” Rivero says.

With so much passion and devotion, these young women seeem to have been born onstage. It is evident that the HCD is the outcome of many hours of daily training. Since its founding, the company has focused on developing its members, emphasizing different traditional and modern dance forms. The dancers also use all types of objects and instruments for percussion: drumsticks, castanets, their shoe heels, canes, claves, chequeres and even chairs. It is a pleasant surprise, not only for spectators but also for the dancers themselves. “I never imagined that I would be playing percussion, but now it is just as much a part of my artistic life as dance. I am very demanding in my work, and that means that it improves every day.”

Sounds that reach the ears and the heart, giving form and movement to the figures of each dancer; because of their tremendous display of energy and virtuosity, they have been dubbed “the dancing Amazons.” Their movement is the essence of Habana Compás Dance, expressed through the Afro-Cuban and Spanish popular imagination that can be seen in every choreography, every painting and drum carved by Córdova. “Movement is part of the company’s work onstage, and also of its rhythmic complexity, its performances and the unique and natural way that we are capable of playing a drum with seven sounds and heel-stamp with elements of flamenco, without losing the Cuban essence that characterizes us,” Rivero said.