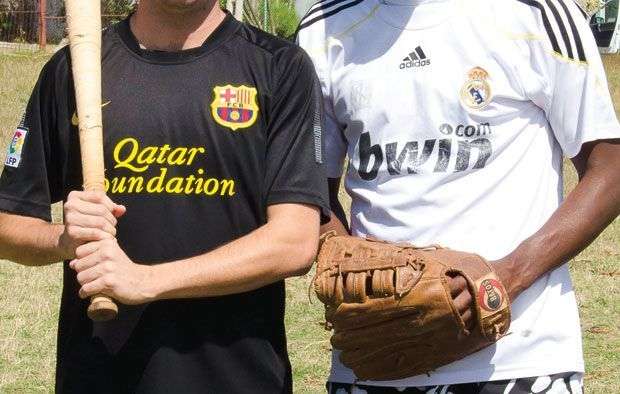 The editor, on the other end of the telephone: “Why do I get the impression that soccer is taking over baseball?” She has a nice voice. Soft. One of those voices that flow like water. “Because soccer is an enormous dinosaur,” I respond, my voice husky with a cold and with evasiveness.

A silence follows. Obviously she is looking for a different answer. That is, something more down-to-earth. She wants a concrete explanation, a reason why baseball, here and now, has lagged behind that other sport where we have never been first-class citizens.

“A year ago I wrote that anybody who tried to hold back soccer was wasting his time,” I clarified. “And that anybody who thought that someday Cubans were going to renounce baseball was seeing crocodiles in their soup. That is my position on this dilemma. I feel it’s impossible to give you any more of an answer, because I don’t have all of the information required. There are iron curtains, lots of mystery, too many heads thinking about ways to impose silence and keep it that way…”

But editors are stubborn people. “In any case, I think that you could do something,” she ordered me in a tone that sounded more like a request than a challenge. And she convinced me. A little while later, I sent her the following paragraphs:

It is not a safe bet that soccer is taking over baseball –even though all signs seem to say so– because tradition is a tough meat to chew and even tougher to swallow. One thing is sure: the Spanish soccer league is taking over the National Baseball Series here. It is the league with the two most popular clubs on the planet. And the baseball series is in clear decline, no matter how much its authorities refuse to see that.

Without question, soccer is voracious. It arrives and takes over. That’s what it did in Japan. And then in another Caribbean island, Puerto Rico. And also in the United States, where soccer is gaining admirers by the day and baseball is waning, according to reliable statistics.

But to go from that to saying that soccer is wiping out everything in its path is quite a stretch. The thing is, we are making things very easy: right now, the Barça-Real Madrid media offering is a heavyweight that is overwhelming the sickly mini flyweight of Pinar del Río-Villa Clara. The scale of consumption is clearly imbalanced here, and that is obvious in the street: for every Industriales team blue T-shirt you see, there are 40 Barcelona shirts with the Qatar Foundation logo. Or more.

I am referring to the MLB, the most powerful league in the world. The one that is in a position –or at least, the best position– to preserve that immense passion that Cubans have inherited, to the extent of making it part of everyday life, like pork, TV soaps and joking around.

That would be a step forward. Making it almost inexcusable for the dinosaur to swallow up baseball. At the same time, though, we will have to work very hard for our baseball players to recuperate the solidness they once enjoyed, and little by little, and sooner rather than later, return to being the gods of their fans.

I don’t know if that’s possible, but it’s definitely necessary.