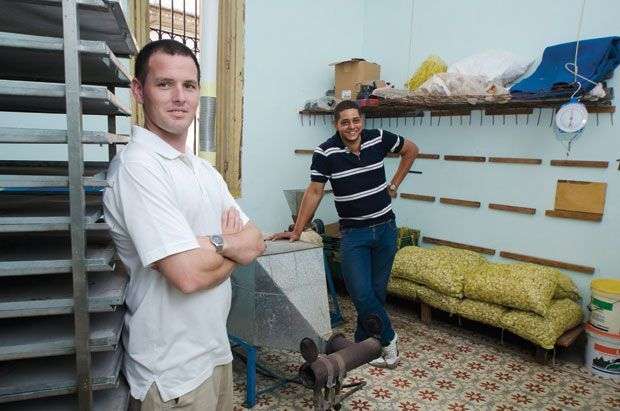 At No. 60 San Mariano street in La Vibora, heavenly aromas waft from a galvanized chimney, proclaiming that something is cooking in the heart of a city that is undergoing slow but encouraging economic reform. These savory smells, produced by the dehydration of garlic and other condiments, are the only thing that can escape the hands of three professionals whose sights are set on making an engineering idea into a business.

The garlic is the product of a process. It’s not an idea that suddenly came to me as I was sitting on my front porch, thinking about the new self-employment licenses.

So says engineer Carlos Fernández-Aballí, the leader of this project.

At 29, he is a professor at the José Antonio Echeverría Higher Polytechnic Institute (ISPJAE) and has many stories to tell. He and his family lived in Venezuela and then in England, where he studied Engineering Systems Design at the University of Bristol.

It is a pioneering area that aims to train specialists in solving complex problems. In Bristol, I realized that in a consumerist world that will have nine billion inhabitants by the year 2050, the basic problems that humanity will face will be, for example, how to have drinking water, how to breathe fresh air, and how to have energy for transforming materials, all essentially technical. These are the areas with the most important engineering problems for us to solve.

As as student, he participated in the creation of a chapter of Engineers without Borders in the year 2000, and coordinated teams with professors and students from diffferent engineering branches at the IPSJAE
university. They won several Mondialogo Engineering Awards in contests organized by UNESCO and Daimler, which were seeking to encourage development projects. However, they were never able to implement them. Challenged, perhaps, by this string of disappointments and encouraged by other accomplishments, he turned to garlic, but without abandoning the classroom.

Today, the little Purita plant can produce up to 200 kg monthly, but they are hoping to partner soon with the Empresa Agropecuaria Metropolitana to be able to produce up to 300 kg daily by using a new plant –also designed and built by them– that will operate on solar energy, warming the air used for the dehydration process. Their little envelopes full of dried and fresh herbs –an exquisite combination– say: “Dehydration is an ecological way to preserve food.” This is because other forms of preservation require refrigeration, and involve financial and environmental costs.

Carlos Fernández-Aballí seems to be an all-out optimist. He admits that he still hasn’t made a lot of money –although the plant operators have done better– but he is confident that the Cuban economy’s dynamic future will allow him to overcome the current plateau.

I’m an engineer and that is why I’m enterprising,” we hear him say.

Do you think that opportunities exist for other professionals to become involved in business enterprise without giving up on the careers they studied for?

I have the intuition that the law is making it possible to do many things now, and that what continues to hold back our country’s progress in this sense is the mentality of certain decision makers, along with many citizens, because we have been slow to interpret the existing legal framework. You can look at the list of 181 authorized activities as a limitation if you see the glass as half-empty; if you see it as half-full, it is a guide for a group of activities that have existing demand in the market in this country, and that have been legalized to be able collect taxes on them. It all depends on how the law is interpreted. Under those same rules, extremely complicated activities can be put together by inter-relating licenses [for private businesses].

So it’s a matter of the correct “interpretation” of business opportunities that Cuba’s existing laws provide?

Categorically, yes. Age is also a factor. The licenses that they granted in the 1990s were viewed as a necessary evil. That’s not the case today. But the idea of almost absolute statism predominated here. The professional sector in Cuba bought into the idea that we, as a society, were going to find something better than the market for allocating resources, and they would be put into the hands of the most capable people. In Cuba we thought we could “beat” the market, and that is an incorrect definition of the problem as a development goal. We don’t need to beat the market; we need to use the market to overcome the logic of unbridled consumerism, segregation, the unequal distribution of resources, and the destruction of the environment.

Do people with a university education have niches in which to establish themselves?

That is an imperative. If professionals don’t bring their competency into play in non-state forms of employment, it’s going to be much harder to solve strategic matters for the country that are currently being addressed with imports or not at all. For example, the production of a train, or of sustainable social housing, or of providing energy for society based on Cuba’s renewable energy sources. The country has major imports in fuel and lubricants; nevertheless, we have energy reserves and professionals with the knowledge sufficient to supplant that spending, even if some parts of the chains of value have to be imported.

Today, an enterprising Cuban can sign a cooperative production contract with the State to operate a hotel or manufacture a train. That can be done now. The Cuban people need to be aroused so that they’ll use their laws and their rights. Being enterprising is in and of itself a form of social criticism; it is finding an opening, identifying a problem to be solved. We have sun, land and intelligence. We need to stop importing intelligence and reposition ours so that it promotes development. We are the only country in the world with a high rate of human development and an environmental footprint that is below the planet’s capacity for regeneration. If we are able to articulate our economy without sacrificing those positions, then we’ll have the possibility –and that’s when we’ll have it– of “beating” the market in the market.

René Baños: "Being Cuban is a privilege"