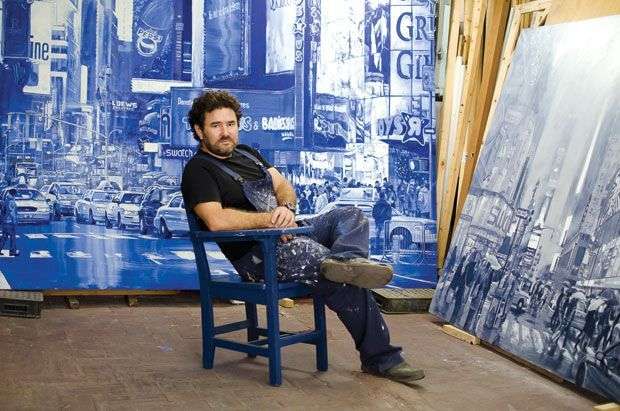 Miami cool is the name that Cuban painter Luis Enrique Camejo has chosen for an exhibition that will be on display until the end of May at the Pan American Art Projects. The gallery is opening its doors for the second time to the work of this artist, who uses the recurring icon of cities.

The idea for the exhibition of 21 pieces came about in 2011 during the painter’s first visit to Miami: “They are all real images of Miami,” and each captures a perfectly recognizable place.

Camejo (Pinar del Río, 1971) paints large; that is, he feels “more comfortable” working with large-format paintings. In fact, he confesses that his studio/workshop –located on Infanta street in the working-class, clamorous municipality of Cerro, in the Cuban
capital– does not have a single easel, palette or thin brush. “I paint with large brooms that are the same size as two paintbrushes, and I use basins and buckets for mixing colors, and then I apply solvents that turn the paint into liquid. And, far from representing, I place the paint on the canvas; that is, I exploit the resources of the material itself.”

To make Miami cool, “inspired by that city, but made in Havana,” Camejo followed his usual procedure or method, which is using photographs as a sketch. “I take the photo thinking about the final work. Life goes by so quickly that it is impossible to capture the moment, and all of the paintings have that sense of drifting away; they are like flashes snared with a certain speed –which is not the normal speed at which things go by, except for some places, which are images that are calmer and more frozen in time.”

The relationship that Camejo establishes with cities is a visceral one, because he believes that his work very much involves atmosphere and sensations, and that it depends on real, not imagined, contact. “I use the city as a symbol of the place where human beings develop, work, think, love, and make philosophy and art.” Every city has its characteristics, he notes, but in his work, they are all treated equally because “in Stockholm, Hong Kong or New York, the human beings who inhabit them share similar pain, nostalgia and longing.”

The cities that he depicts (absolutely all of them) are monochromatic, and according to what he told OnCuba in an exclusive interview, “the idea of working with a single color has the purpose of affecting the viewer and awakening certain sensations.” This process of choosing the tone is very intuitive, and arises from what he feels when he visits a given place. He told us, for example, that he is about to begin a new project—which will include 30 large-format pieces—called Ciudades (Cities), and that London will be in black and white tones, because he was very much struck by how “in England all of the traffic signals and house railings are painted black. London is making me do it in black and white,” he said emphatically. Subsequently, Ciudades will be made into a book that will include all of the pieces, as a way of creating a memory, a record.

While his visual code is realist, his artwork is marked by abstraction, with the evident influence of Jackson Pollock and Mark Rothko, both of them representatives of so-called abstract expressionism, but “all of this is seen through a filter.”
While watercolor is one of the most difficult techniques to master, Luis Enrique embraces it easily and confidently. He emphasizes that collectors of Latin American art tend more toward canvas, but in Europe, watercolors on paper are very prestigious and very popular.

People say that Camejo is an excellent cook, putting the same effort and art into every dish that he does into his painting. While he holds an average of two solo exhibitions annually—always with new work—and participates in various collective projects, he takes his time. “I like to feel the pleasure of creating, and I enjoy that moment, which is unique and unrepeatable,” he said.

René Baños: "Being Cuban is a privilege"