The vast majority of Americans arrive in the Caribbean country on board cruise ships. 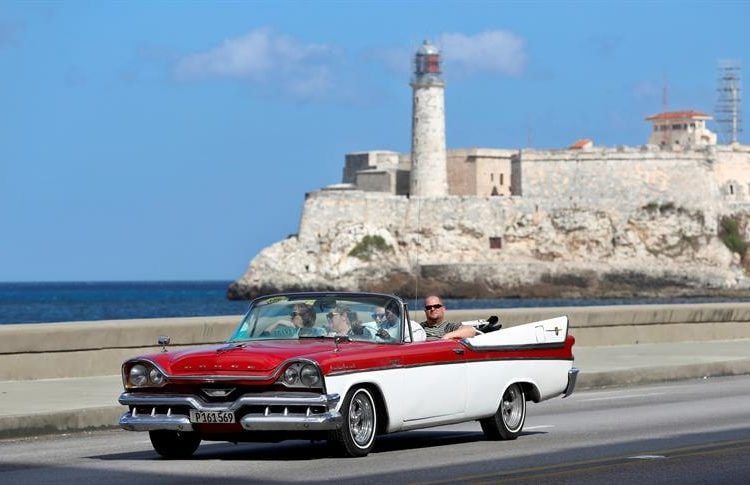 So far this year Cuba has received 605,416 American visitors, most of them on board cruise ships, a figure that has grown compared to 2017 despite the increase in restrictions on U.S. travel and the strengthening of the embargo, the island’s Ministry of Tourism (MINTUR) executives said today.

In addition to the U.S. travelers there are 585,600 Cubans living abroad, including Cuban-Americans, for an increase of 17 percent compared to the same period last year.

Among Americans, Cuban-Americans and tourists of other nationalities who fly from the United States, a total of more than 1.6 million visitors have been registered so far, MINTUR Commercial Director Michel Bernal announced during a press conference.

“This is still the second market after Canada, despite the blockade and the strong decline in flights” as a result of the restrictions imposed by President Donald Trump’s government, which bans its citizens from traveling freely to Cuba, Bernal said.

This market has had “the highest flow” after Canada, which although the latter has contributed 1.1 million travelers this year, it saw a 2 percent decrease compared to 2017.

The vast majority of Americans arrive in the Caribbean country on board cruise ships, on which about 817,000 have arrived so far, a figure which is expected to increase to 850,000 cruise passengers at the close of December.

The boom in this modality is due in part to the fact that most of the Cuban hotels are included on the U.S. government’s blacklist and prohibits its citizens from staying and using these facilities, belonging to companies related to the Cuban Armed Forces.

“This year Cuba will register a new record of more than 4.7 million visitors, more than the 4.5 million reached in 2017, an increase achieved despite the fact that in this period arrivals by air decreased by 6 per cent,” Bernal reported.

Even so, the island did not manage to reach the five million visitors it initially had forecasted in 2018.

The executive recalled the “serious blow” to the hotel infrastructure caused by the devastating Hurricane Irma in September 2017 and acknowledged that arrivals to Cuba decreased last July and August.

This indicator’s recovery began in September and October, an “encouraging” result that places the island closer to its goal of reaching 5.1 million international travelers in 2019.

Cuba broke records in the arrival of foreign visitors in 2016 and 2017, when 4.5 and more than 4.6 million tourists, respectively, came to the Caribbean country.

This tourist boom coincided with the “thaw” in relations between the Caribbean country and the United States, which are now going through a delicate moment with the arrival of Trump to the White House in 2017.

The U.S. embargo and the warnings issued to its citizens due to the mysterious health incidents suffered by U.S. diplomats in Havana, represented a blow to Cuba’s aspirations to surpass its previous records of visitors.

Faced by this, today Cubans are promoting a strong campaign aimed at Russia, Mexico, Brazil and China, the fastest growing markets in the last two years, without forgetting their biggest traditional clients: France, Germany, Spain, United Kingdom and Italy.

The latter will be Cuba’s next commercial center of attention, as part of its efforts to improve the indicator of international tourists’ of overnight stays.

To guarantee the quality of the infrastructure, the island plans to improve and increase its hotel capacity, which today stands at more than 70,000 rooms, 17.6 percent of them in Havana, the country’s most important destination.

In its development plan up to 2030, the Cuban Ministry of Tourism is including 610 projects, among them several real estate developments, golf courses and theme parks, said MINTUR Director of Development and Investment José Daniel.

Daniel advanced that in 2019 the Cuban capital will begin recovering emblematic buildings such as the New York Hotel in Old Havana and building new ones in the centrally located neighborhood of Vedado.

The famous Riviera and Habana Libre hotels, managed by the Spanish groups Iberostar and Meliá, respectively, will receive investments worth millions to revamp the facilities and adapt them to the latest trends in the sector.

Iberostar will spend 35 million euros and Meliá about 25 million dollars in both projects that will be executed throughout 2019, the executive said.