Díaz-Canel, the island’s president for three years, was elected to succeed Castro, who had already confirmed his intention to leave his post at the head of the PCC during the opening of the 8th Congress of the political organization, which culminated this Monday in Havana. 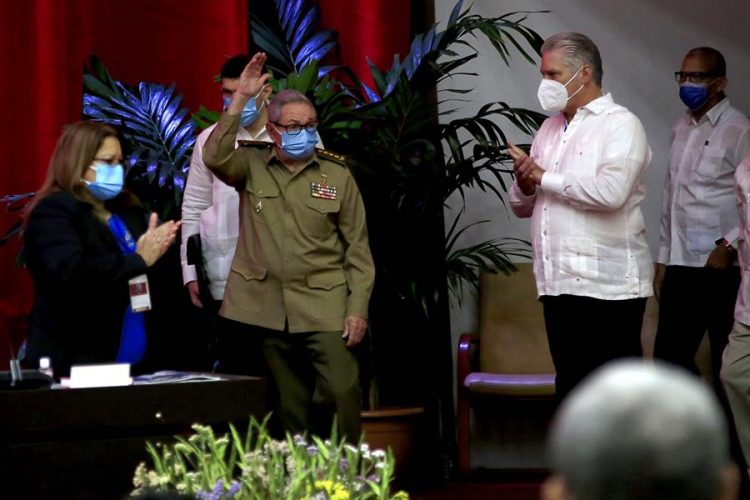 Cuban President Miguel Díaz-Canel (r) will take over from Raúl Castro (c) as head of the Communist Party of Cuba (PCC), after his election as First Secretary during the 8th Congress of the political organization. Photo: Ariel Ley Royero/EFE via ACN.

Díaz-Canel, the island’s president for three years, was elected to succeed Castro, who had already confirmed his intention to leave his post at the head of the PCC during the opening of the 8th Congress of the political organization, which culminated this Monday in Havana.

The election of the current president was announced at the opening of the congress’ last day, at which time the new Central Committee, the Political Bureau and the party’s Secretariat were also announced, Cubadebate website reported.

According to this publication, the Political Bureau is headed by Díaz-Canel and also made up of Esteban Lazo Hernández, who chairs the National Assembly and the Council of State; Vice President Salvador Valdés Mesa; Prime Minister Manuel Marrero Cruz; Deputy Prime Minister Roberto Morales Ojeda; the newly appointed Minister of the Armed Forces, General of the Army Corps Álvaro López Miera; and the Minister of the Interior, Division General Lázaro Álvarez Casas.

In addition, it is also made up of Foreign Minister Bruno Rodríguez Parrilla; Ulises Guilarte de Nacimiento, head of the Central Organization of Cuban Trade Unions (CTC); Teresa Amarelle Boué, head of the Federation of Cuban Women (FMC); Dr. Martha Ayala Ávila, General Director of the Center for Genetic Engineering and Biotechnology (CIGB); José Amado Ricardo Guerra, Secretary of the Council of Ministers; Luis Alberto Rodríguez López-Callejas, executive president of the powerful Business Administration Group (GAESA); and Gladys Martínez Verdecia, first secretary of the PCC in the province of Artemisa.

Along with Raúl Castro, 89, other historical leaders also left the leadership of the PCC, such as the until now number two of the organization, José Ramón Machado Ventura (90), and Commander Ramiro Valdés (88), in addition to Marino Murillo, face of the economic reforms started a decade ago on the island.

The post of second secretary of the PCC, which until now was held by Machado Ventura, was not announced at the closing of the congress nor does it appear in the lists released by the Cuban state media—the only ones with access to coverage of the conclave—so apparently the post was eliminated from the party leadership.

As for the remaining members of the Central Committee of the PCC, standing out among them are figures with an important place in the current Cuban government, such as Deputy Prime Minister and Minister of Economy Alejandro Gil, the also Deputy Prime Ministers Inés María Chapman and Jorge Luis Tapia, as well as several ministers, among them Meisi Bolaños, of Finance and Prices; Betsy Díaz, of Domestic Trade; Juan Carlos García, of Tourism; Jorge Luis Perdomo, of Communications; and José Ángel Portal, of Health; although the absence of Rodrigo Malmierca is striking, at the head of a key portfolio such as Foreign Trade and Foreign Investment.

Also included are a group of high-ranking officers and first secretaries of the PCC in the different provinces of the country, the Comptroller General Gladys María Bejerano; Mayra Arevich, president of the state telecommunications company ETECSA; Homero Acosta, secretary of the National Assembly and the Council of State; Josefina Vidal, one of the faces of the thaw between Cuba and the United States and today the island’s ambassador to Canada; and Gerardo Hernández, one of the Cuban prisoners in the U.S. accused of espionage who returned to the island during the Obama administration and currently heads the Committees for the Defense of the Revolution (CDRs).

In addition, a group of lesser known names appears in the Central Committee in the island’s current political and government scenario, and fifty women, a figure that contrasts with the women included in the Political Bureau (three out of 14) and in the Secretariat (none among the six members).

According to the official newspaper Granma’s report, 100% of the voting tickets for the new members of this body were valid, while all were elected with more than 99.32% of the votes.

The 8th PCC Congress concluded on Monday after four days of sessions, with a speech by Díaz-Canel, his first as leader of the political organization and in which, however, he confirmed that his predecessor will continue to be consulted on the “strategic decisions of the future of the nation”.

In his closing speech, the president assured that “the project undertaken” in Cuba under the leadership of Raúl Castro in the last 10 years “is colossal” and said that the ex-president “will always be present, fighting with energy, contributing ideas and purposes to the revolutionary cause through his advice and mentoring and his alertness to any error or deficiency”.

In addition, in his speech, Díaz-Canel reaffirmed his commitment to “continuity” with the “historic generation”, whom he thanked for their “consecration and dedication to the revolutionary project”, while calling to consolidate the “generational continuity” and to turn young people into “agents of the transformations underway”.

He also referred to the economic situation of the country and its current challenges and difficulties, to the US embargo and the “campaigns of subversion and ideological intoxication promoted by US agencies and entities”, and assured that Cuba’s aspiration “is to live in peace and relate with our northern neighbor as we do with the rest of the international community, on the basis of equality and mutual respect, without interference of any kind”.

The closure of the event coincided with the 60th anniversary of the failed invasion of the Bay of Pigs -or Playa Girón- by a group of Cubans opposed to the nascent Revolution and with the support of the United States government.