Some 100,000 doses arrived in Tehran in March for the testing. Last Saturday, Soberana 02 obtained permission for clinical trials after its effectiveness and safety was assessed by the Research Ethics Working Group of the Iranian Ministry of Health

EFE
in Coronavirus, Science in Cuba
0 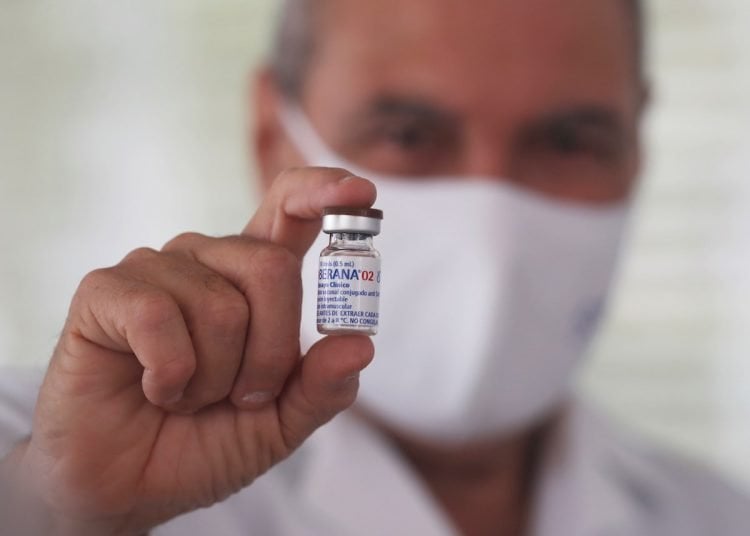 Iran will begin in the coming days the third phase of the clinical trial of the Cuban Soberana 02 vaccine, locally called Pasteur, which will involve 24,000 volunteers from seven provinces in the north, center and south of the country.

The director of the Pasteur Institute of Iran, Alireza Biglarí, explained this Monday that eight Universities of Medical Sciences of Mazandaran, Babol, Isfahan, Yazd, Kerman, Hormozgan, Zanyan and Hamedan are participating in the trials.

In two of the provinces a booster dose will be administered, in addition to the two doses of the vaccine, according to Biglarí, quoted by local ISNA news agency.

“The booster dose can be effective in boosting the immunity of people who have previously been infected with COVID-19,” he explained.

Biglarí announced that after the final stage of the clinical trial and if it is successful, this serum will be able to be used in the general vaccination in the country, which so far accounts for more than 66,000 deaths and 2.2 million infections and which has a very limited number of doses.

According to the agreement signed last January between the Finlay Vaccine Institute (IFV) of Havana and the Pasteur Institute, the third and last phase of the Soberana 02 trials is also being carried out in the Persian country and then the technology is transferred to produce the drug locally.

This candidate began the final stage of clinical trials in Havana on March 8 with 44,010 volunteers, and at the end of the month the tests were expanded with a parallel intervention study of another 150,000 people.

To carry out the trials in Iran, in March about 100,000 doses of the vaccine arrived in Tehran, which last Saturday obtained permission for clinical trials in the country, after being evaluated for its effectiveness and safety by the Research Ethics Working Group of the Iranian Ministry of Health.

Iran, which is currently going through the fourth wave of the pandemic with daily maximum infections, is developing locally several vaccine preparations, two of which are in the first phase of clinical trials and a third, COVIRAN Barekat, began the second phase a month ago.