Air connections between Moscow and Cuba’s main sun and beach destination were officially reestablished this Sunday, with a flight from AZUR Air airline that brought a bit over 500 Russian tourists. 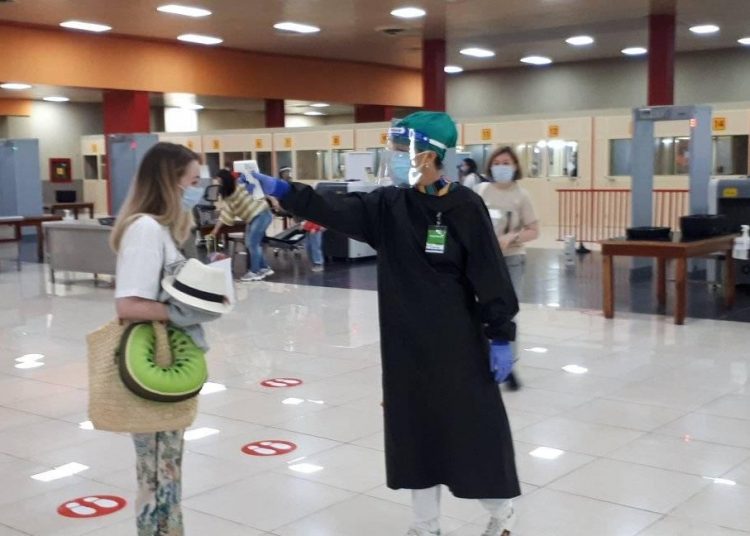 All travelers went through health checks at the Matanzas airport before leaving for their respective destinations in Varadero. Photo: Taken from Pedro Arturo Rizo’s Facebook profile.

Shortly after five in the morning of this Sunday, April 18, air connections between Russia and Varadero were officially restored, after the landing at the Juan Gualberto Gómez International Airport of a flight from Moscow with around 500 passengers.

Through the Anex Tours tour operator, the AZUR Air airline completed the first trip from the Russian capital to the island’s main sun and beach destination in more than a year, since in March 2020 the flights between the two cities were suspended because of the coronavirus pandemic.

According to the images released by journalist Pedro Arturo Rizo, from TV Yumurí, all the travelers went through health checks at the Matanzas airport before leaving for their respective accommodations in Cuba’s most recognized tourist destination, located in the north of the province. of Matanzas.

Emilio Lozada García, general director of bilateral affairs of the Ministry of Foreign Affairs, had announced on Twitter the reestablishment of operations between the two destinations. The official also pondered the importance of tourism in relations between Russia and Cuba, and classified it as “a bridge of exchange between sister nations.”

Flights between Moscow and Varadero were planned to resume on April 1, but logistical arrangements to be decided on by the Russian aeronautical authorities delayed the restart of operations, Juan Carlos Escalona, the tourism adviser at the Cuban embassy in Russia, told Prensa Latina.

Once these negotiations have been solved, it is expected that seven flights from different airlines and between 2,500 and 3,500 Russian travelers will arrive in Varadero every week from the Eurasian country, one of Cuba’s main tourist market. In addition to AZUR Air, other airlines such as Aeroflot, Rossiya, NordWind and Royal Flight will also fly to the Matanzas beach resort, as a result of the negotiations carried out by the Cuban delegation at the Moscow International Tourism Fair, held last March.

According to a schedule released by the Cuban Airports and Aeronautical Services Enterprise (ECASA), Royal Flight should begin its flights to Varadero on Thursday, April 22, while NordWind will start on Saturday, April 24, although this planning may be modified due to adjustments carried out by the airlines.

Russian tourism to Cuba registered an increase of close to 30% in 2019, when the island received almost 178,000 visitors from that Eurasian country, a figure cataloged as a record for that market that has become one of the emerging issuers to the island.

The Cuban Ministry of Tourism estimated that in 2020 the number of Russian visitors would reach 200,000, but the coronavirus pandemic paralyzed the global tourism sector for several months and blurred the recovery plans and eventual growth on the island.

At the end of that year, the Eurasian country was placed among the top 10 issuers of visitors to the Caribbean nation, with a total of 47,742 travelers, despite the travel restrictions imposed by COVID-19. Official figures detail that so far in 2021, more than 14,000 Russian travelers have vacationed in the different tourist destinations that are operating in Cuba.

The island’s most famous resort, whose beaches are among the 25 best in the world according to TripAdvisor, requires visitors to comply with health protocols that include the presentation of a negative PCR certificate for coronavirus, carried out 72 hours before the departure of the flight, and carrying out the same test upon arrival at the Cuban airport.