A Business Forum that seeks to promote business exchange and the assessment of joint projects in the IT and communications sector began this Wednesday in Havana. 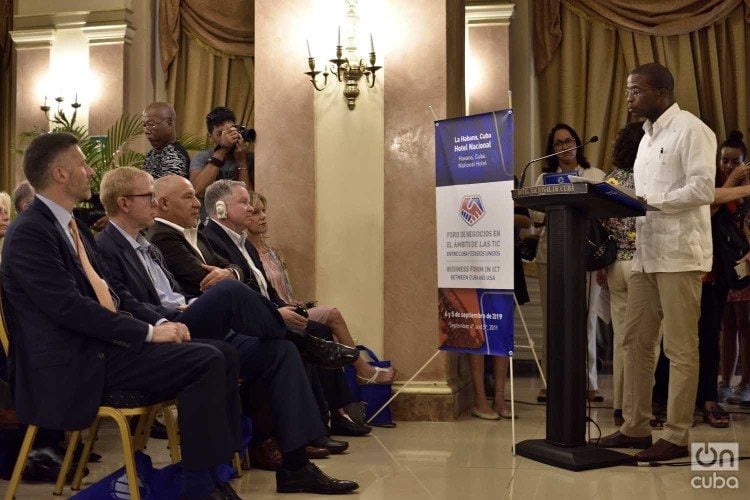 Opening of the Business Forum between Cuban and U.S. companies in the IT and communications sector at the Hotel Nacional de Cuba, in Havana, on September 4, 2019. Photo: Otmaro Rodríguez.

At a time when relations between Cuba and the United States are in a frank rollback after the arrival of Donald Trump to the White House, companies from both countries are committed to dialogue and the assessment of new joint projects in the IT and communications sector.

Directors of the U.S. companies S3, Transfer To, Liberty Latin America and C&WN―these last two, part of the Liberty Global Group, the largest cable and broadband services company in the world― this Wednesday participated in Havana with their Cuban counterparts in a Business Forum that seeks to promote business exchanges and assess possible cooperation projects.

“Any opportunity to meet with the Cuban government, with ETECSA (Cuban Telecommunications Company) and create associations on this side, will always be of interest to us,” Chris Coles of Liberty Latin America told the press during the opening of the meeting held at the Hotel Nacional de Cuba.

Coles said that it is necessary to “find common ground” and “ways to overcome historical divisions” in order to carry out useful projects for both countries.

For his part, Rubén Ramos, vice president of the Chamber of Commerce of Cuba, said that the forum is an “excellent opportunity” to “share ideas and exchange on present and future challenges,” as well as to “find the most convenient mechanisms for future negotiations.”

Ramos, who was in charge of the keynote address, highlighted to the visitors the “priority” that the island’s government gives to computerization, a strategy in which it has proposed to “advance gradually,” and he underlined the role of foreign investment in “the updating” of the Cuban economy.

Within the forum, bilateral exchanges and presentations were planned for Wednesday, while on Thursday the U.S. delegation will visit the University of Computer Science (UCI) and hold a meeting with representatives of the Ministry of Foreign Affairs.

On the Cuban side, the Information Technology and Communications Business Group (GEIC), Correos de Cuba and ETECSA are participating, as well as executives from the Ministries of Communications and of Foreign Trade.

During the Barack Obama administration, telecommunications was one of the main areas of the bilateral rapprochement between Cuba and the United States. Among the measures to “soften” the embargo, Obama gave the green light to companies in this sector to land on the island, which led to agreements between Havana and the Google technology giant and with U.S. telephone companies.

In that context, Google offered the Cuban government to increase connectivity through wireless technology, but its proposal did not prosper. However, the company did not lose its interest in the island and in 2016 signed an agreement with ETECSA to reduce the access time to the contents of the search engine in Cuba, thanks to the use of Google Global Cache, which has been in operation since April 2017

In addition, during President Obama’s visit the company opened its first technology center in Havana in the studio of plastic artist Alexis Leyva Machado, “Kcho,” and recently signed a memorandum of understanding that seeks to “improve the quality of access to Internet contents” on the island “when the technical conditions allow it.”

Although the Trump administration has strengthened sanctions against Cuba, these agreements and executive orders are still in force.

“We have more than 10 agreements in force between both countries that have been beneficial and we intend to continue developing these projects and assessing what possibilities we have for new projects between both parties,” ETECSA president Mayra Arevich confirmed to the press.

Arevich said that despite the current state of bilateral relations, a dialogue between companies from both countries is possible, based on the existing experience with several U.S. companies, with which, she said, “responsible and respectful” exchanges and agreements have been maintained that “have also guaranteed in some way the development of communications services in Cuba.”

However, she regretted the “great impact” caused by the embargo and the most recent Trump administration measures, including the full activation of the Helms-Burton Act and the creation of a working group on Internet on the island, which she considered “an obstacle” for “more profitable” links for both parties and the development of new businesses.

“I think that if we did not have the ‘blockade’ we would have been in a better position, but we have to say that with the companies that we have agreements, relations have been good and we hope to continue without difficulties,” Arevich insisted, referring to the agreements with Google, AT&T and T-Mobile.

Cuba has an estimated mobile coverage of 85.5%, with more than 5.5 million active lines, of which 2.5 million have access to the Internet, according to official data revealed at the opening of the forum.

Last December ETECSA activated the 3G data network for Internet access on mobile phones and consolidated the marketing of Nauta Hogar, through which it markets home connection, something that until the end of 2017 only some professionals and public figures on the island were allowed.

Mijaín López: "My strategy is to train like hell"