Mijaín López: “My strategy is to train like hell”

At the threshold of his fifth Olympic participation and in search of his fourth Olympic gold medal, the stellar wrestler from Pinar del Rio does not lower his guard and prepares his assault on Tokyo 2020. 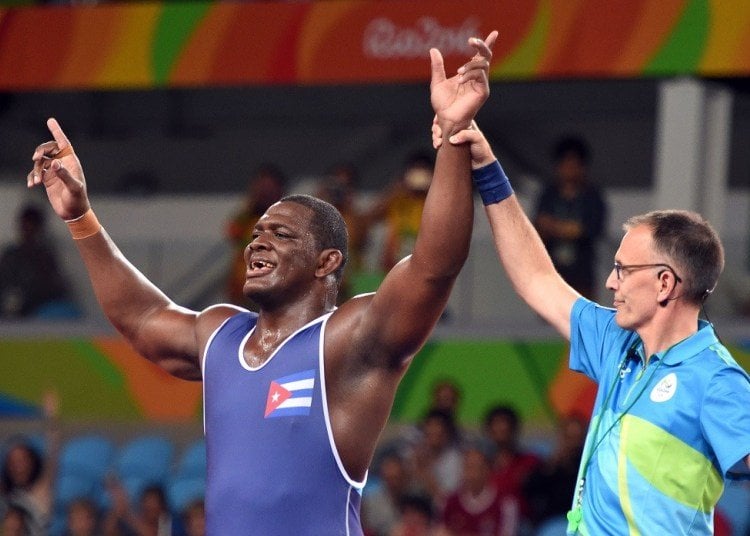 “The kids think I’m like a dad, that’s why I have to come to teach them a little,” says Mijaín López, half-jokingly, half-seriously, when he’s been training only for a few minutes.

With a smile on his face, but drenched in sweat after showing only a sample of his exceptional Greco, this athlete from Pinar del Río puts order in the Cerro Pelado, headquarters of Cuban wrestling in Havana.

Mijaín arrives mid-morning at the gym. He enters silently, although his presence is immediately noted, perhaps because of the magnetism that surrounds this century’s best wrestler in the world, and one of the historical leaders of this sport.

He wears a dark blue tight suit with the flag at chest level, gray pants made of thick fabric and a pair of flip flops. In his hands he has his work shoes, which he puts on in a matter of two minutes to get on the mattress and start sweating.

The action begins against Oscar Pino, after some stretching and a brief warm-up. Mijaín puts pressure on him, shakes him, corrects the positions of his hands, head and legs while wrestling in the center of the circle.

“I’ve been coming every day to help him minimize his mistakes and add something that he’s missing. We have to help each other,” says the athlete, who knows everything that’s at stake with his 25-year-old disciple.

Pino has been demanding the most from himself for months, training in both styles with the same seriousness. A few days ago he won a bronze medal at the Pan American Games in the freestyle and in three weeks he will return to Greco to seek Mijaín’s classification for Tokyo 2020 at the Astana World Cup.

As if that were not enough, after the world championship he will focus again on polishing his deficiencies in freestyle in order to win his own ticket to the Olympic Games in the continental classification of the coming course, in Ottawa, Canada.

“He is doing things well. He has a lot on his back, but he’s doing OK. Now he was in the Pan American Games and won a silver medal. Whether in freestyle or in Greco, it is one more prize for his record. He has taken advantage of the training and we will continue to push these days that we have left until the World Cup, so he gets there and does what he has always done,” says Mijaín about Pino.

Although everyone talks about Mijaín’s three Olympic gold medals and five world titles, it cannot be ignored that Pino has won two bronze medals in world championships (Paris 2017 and Budapest 2018), so there is full confidence that he will again be included among the best six of the 130 kilograms and thus ensure Mijaín’s passage to the Olympics.

“As I was the continuation of Cándido Mesa or Héctor Milián, Pino will defend my legacy. The fact that he is seeking my classification now does not mean that I’m taking advantage of his work. What he achieves in the World Cup, regardless of what favors me, is one more result for him, a new experience. In addition, the vision here is to fight for the fourth Olympic medal, it is something that everyone is going to enjoy, particularly him,” Mijaín explains.

His mind on Tokyo

Mijaín is in shape. Despite how much talk there is about how difficult it is to stay at around 130 kilograms, hours of work and sweat sculpt the athletic figure of this wrestler, who gives the impression of being ready to face the toughest of challenges.

His gaze points to Tokyo, although he prefers not to give many clues to the strategies for the summer event, because everyone is watching the champion’s steps.

“I know there are many doubts about me because I have competed little, although they must have gotten an idea from the Central American and the Pan American Games. I, although I am outside, have also studied the rivals. It isn’t one of the things I like the most, I’m not used to going deeply in that direction because athletes constantly change, new strategies are drawn and tomorrow they don’t do the same as today,” explains Mijaín.

The gladiator surprises with this move. Anyone would think that much of his success is based on the strict knowledge of the rivals, but, in reality, Mijaín has a sixth sense to study his rivals and exploit their deficiencies in the arena.

“I stick to what I do. My strategy is to train like hell, sweat every day, and always try to be happy with what I’m doing, with my state. I like my sport and what I do has to be perfect. I can’t stand making mistakes, maybe that’s why in the first Olympic medal I was marked a point, in the second they didn’t mark me and in the third either,” Mijaín proudly says.

With his sights set on Tokyo, Mijaín hopes that the script doesn’t change too much, but for now his thoughts are focused on enjoying the Olympic Games. “When you go to the Olympic Games, which are every four years, the 110 ends and the 220 turns on. It’s another preparation, stronger training and more dedication, so you have to enjoy it to the fullest.

“I get to the competition as it is. Nothing pressures me, neither television, nor rivals, nothing. All I think about on the mattress is doing things perfectly, breathe in and out, and always think that if you’ve done everything right in training, then you can win, yes or yes,” says Mijaín, who opens his arms to receive everything coming.

“The whole world is going to be waiting to see what I do, there are many eyes watching, but not only me, also those who will be appearing in my path. That is why the pressure there will be for everyone and I will enjoy it. The one who’s going to wrestle is the champion, triple Olympic champion, the one who doesn’t make mistakes.”