This culinary workshop, which will be held in Havana in January 2020, will be dedicated to regional cuisine as a symbiosis of tradition and avant-gardism, and to the pairing of culinary art with plastic arts. 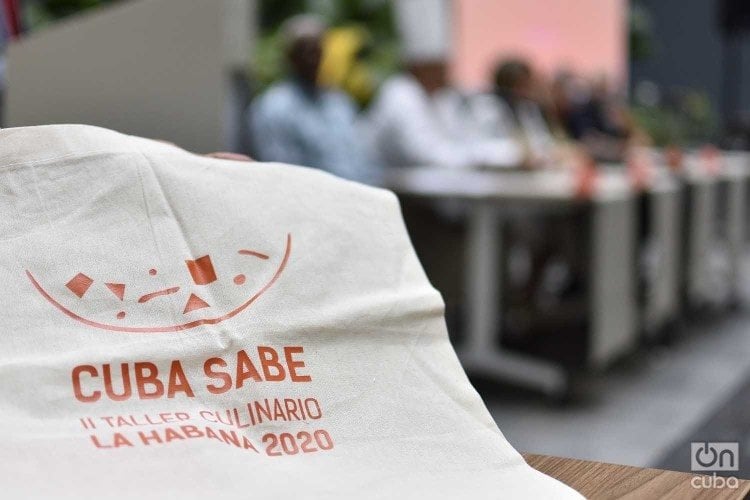 Press conference of the second Cuba Sabe Culinary Workshop, to be held in Havana in January 2020. Photo: Otmaro Rodríguez.

The flavors and knowledge of Cuban cuisine will be the main protagonists of the Cuba Sabe Culinary Workshop, which will be held in Havana from January 9 to 11 next year.

Organized by the Paradiso Cultural Tourism Agency, together with the National Council of Cultural Heritage and the Culinary Federation of Cuba, the event is a continuity of the Gastrocult Academic Workshop, held at the beginning of 2019 at the Iberostar Grand Packard Hotel, which will again host this new edition.

This time, the event will be dedicated to regional cuisine as a symbiosis of tradition and avant-gardism “because in all of Cuba people don’t eat the same,” said Lis Cuesta, wife of Cuban President Miguel Díaz-Canel, at a press conference. She is chairing the Organizing Committee of the Workshop as Paradiso Academic Services Manager.

Dishes and flavors that distinguish different regions of the island as evidence of a living culture, in which heritage and renewal go hand in hand, can be appreciated during the event, in which workshops, lectures, tastings, gastronomic tours will take place as well as concerts by artists such as Alain Pérez and Isaac Delgado.

Cassava will particularly be honored as one of the island’s traditional foods, with the aim of giving it greater visibility and recognition within and outside national borders, confirmed Cuesta.

Beverages will also play a prominent role, with the presence of the Bodegas Torre winery and the preparation of cocktails by renowned Cuban bartenders.

In addition, the aesthetic value of cuisine will be enhanced with a unique pairing with the plastic arts, which this time will be the guest artistic manifestation―in the first edition it was music―, which will make it possible to appreciate points in common between both creative arts.

Under the slogan “It tastes how it’s painted,” the workshop will recognize the work of the 200-year-old San Alejandro Academy of Art and will propose a contest between culinary artists and painters based on the visual quality of what is brought to the table.

There will also be a space for foreign cuisine, particularly Italian cuisine because of its unquestionable influence on what Cubans eat. The assimilation and reinterpretation on the island of Italy’s culinary art will merit a space in the program of the event, in which famous dishes from the European country can be tasted thanks to the participation of chefs from that nation.

So far more than 200 participants have been confirmed, not only from Cuba and Italy, but also from Spain, Mexico and the United States.

The president of the Organizing Committee emphasized the support the workshop aims to be for declaring Cuban cuisine a national heritage, a goal it shares with other culinary events currently being held on the island.

Such an interpretation was supported by chef Eddy Fernández, president of the Culinary Federation of Cuba, an organization that for this purpose prepared a file which is currently being assessed by the specialists of the National Cultural Heritage Council.

Fernández highlighted the role of Cuba Sabe as a space for the exchange, fraternization and learning of cuisine professionals, and as a platform to strengthen the heritage value of the island’s cuisine, based on its knowledge and emblematic dishes that, beyond contextual deficiencies, are an attraction for its visitors and could turn Cuba into a gastronomic destination.

Mijaín López: “My strategy is to train like hell”