This was confirmed on Twitter by Cuban Foreign Minister Bruno Rodríguez, who affirmed that only in the first 14 months of the administration of the current U.S. president, Joe Biden, the embargo has caused damages to the island worth 6.364 billion dollars. 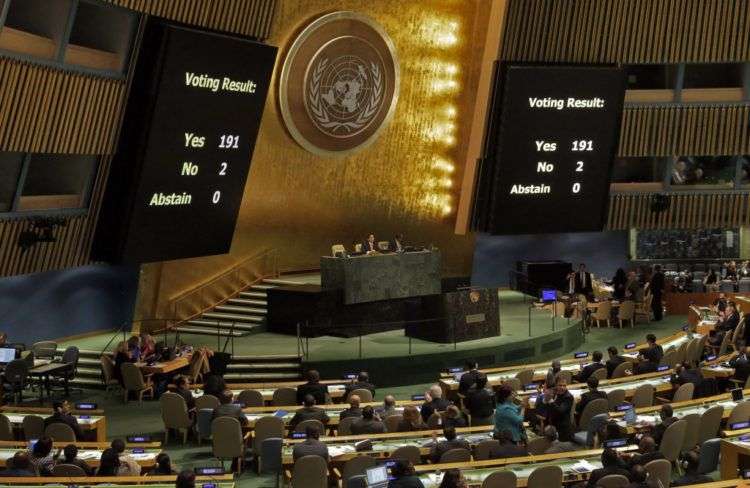 Archive image of a vote in the UN General Assembly on the Cuban resolution against the U.S. embargo. Photo: TV Yumuri/Archive.

Cuba will present for the thirtieth time before the UN General Assembly a draft resolution to end the U.S. embargo.

This was confirmed on Twitter by Cuban Foreign Minister Bruno Rodríguez, who assured that after more than 60 years of its being established “this policy has an impact today, as never before, on Cuban families inside and outside the country.”

According to Rodríguez, quoted by Prensa Latina (PL) news agency, only in the first 14 months of the administration of the current U.S. president, Joe Biden, the embargo has caused damages to the island worth 6.364 billion dollars.

The presentation of the draft resolution, the report said, is scheduled for November 2 and 3. Until now, the initiative has had the majority of international support and the systematic opposition of the United States and Israel, except in 2016 when both countries abstained during the Obama administration.

In this sense, the Cuban foreign minister lamented that Washington persists in ignoring “the international community’s claim” and has intensified sanctions “to unprecedented levels.”

In a video on his Twitter profile, Rodríguez affirmed that the embargo “has been a failed policy in its objective of subverting the constitutional order in Cuba,” EFE news agency, for its part, pointed out, according to which the foreign minister also stressed that it has caused “shortages and unjustifiable pain and suffering to Cuban families by limiting access to food, medicine, fuel and other essential goods.”

The minister also described as “unilateral and fraudulent” the designation of Cuba as a “state sponsor of terrorism,” a measure that in his opinion “reinforces the dissuasive and intimidating impact” of the embargo.

The “marked extraterritorial nature” of this decision, he continued, “affects the legitimate ties established by governments, entities, banks and businesspeople” with Cuba and the citizens of this country who reside abroad.

This group of economic, commercial and financial sanctions, which began six decades ago and have progressively tightened up to the last 234 measures established by Donald Trump, is one of the main reasons for the current crisis that Cuba is going through, as emphasized by the island’s authorities.

Last year the vote was held in June, after it could not be held in 2020 as a result of the pandemic. The result was 184 votes in favor of ending the embargo on Cuba, three abstentions (Colombia, Ukraine and Brazil) and two votes against: the traditional ones from the United States and Israel.