The MINREX reported that for this process 123 constituencies had been set up. They enabled 1,008 polling stations in more than 120 countries. The Family Code will be put to the vote on Sunday, September 25, in Cuba. 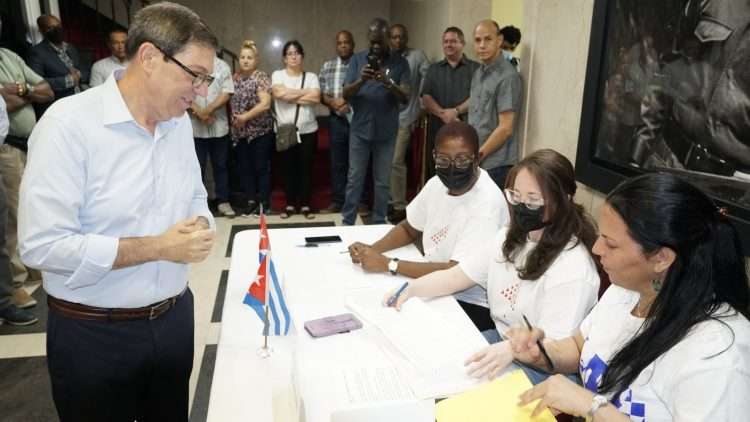 Cubans who are outside the island in state functions voted this Sunday for the referendum on the Family Code. This took place in about a thousand electoral colleges distributed in 124 points that the Ministry of Foreign Affairs (MINREX) has, according to Prensa Latina news agency.

The Foreign Ministry has disclosed on its social networks that they have cast their vote in several diplomatic offices, including the delegation that will participate this week in the High-Level Segment of the General Debate of the 77th Regular Session of the United Nations General Assembly. From New York, Cuban Minister of Foreign Affairs Bruno Rodríguez exercised his vote.

Alina Balseiro, president of the National Electoral Council, had said on the Mesa Redonda TV program that “citizens who are abroad in state missions can exercise their right in more than a thousand electoral colleges authorized for that purpose.”

The referendum on the Family Code will be put to a vote on Sunday, September 25, in Cuba.

Balseiro stressed that “there is no precedent for a referendum of this type in the country, so the preparation of the documentation and the electoral system to guarantee transparency and adherence to legality and processes has been much more intense,” PL reported.

Minister of Justice Oscar Silvera, quoted by the Cuban news agency, added that this new Code “protects human dignity, all family law institutions, eliminates any vestige of discrimination in the family sphere and rejects violence.”

The Family Code has been considered innovative by various Cuban civil society groups because, among other guarantees, it grants the possibility of same-sex marriage.

This regulation has been interpreted by the LGBT community as a fact of vindication and social justice and the achievement of their human rights. The Family Code, on the other hand, was rejected by the Catholic Church in an official statement published by the Vatican news agency.

The MINREX reported that for this process 123 constituencies had been set up, in which 1,008 polling stations had been enabled in more than 120 countries.