Several scholars of relations between Cuba and the United States debated in a related colloquium that was part of the program of the 29th Havana International Book Fair. 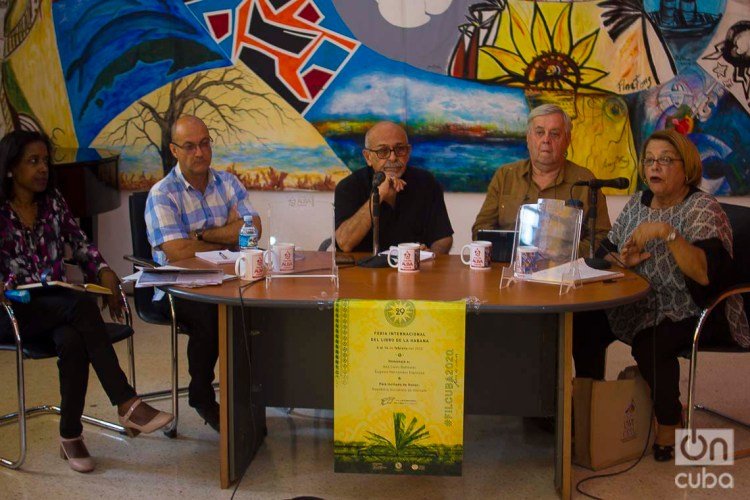 Specialists on the subject, such as Carlos Alzugaray Treto, Milagros Martínez, together with historian Ernesto Limia and political scientist and essayist Rafael Hernández, moderator of the colloquium, discussed the most important moments regarding the change relations underwent as of the presidential term of Barack Obama (2008-2016), a stage in which there was a substantial unprecedented turn in Cuba-U.S. diplomatic relations.

Martínez, a Master in Caribbean Studies and a specialist in Cuban studies in the United States, takes as a starting point for these changes the U.S. policy’s failure throughout more than 50 years, and noted the change in Washington’s foreign policy towards Latin America in general.

Another point would be the role played by various sectors within U.S. society and politics, which demanded a change in the handling of relations with the island’s government. “The pressure of these sectors, together with the changes taking place in the Cuban emigration settled in the United States” strengthened the turn in this policy during the Obama administration.

“American policy had a lot of continuity in the aspect of regime change, ‘by force,’ which advocated sweeping away the Revolution and all that it meant, a method that prevailed especially in Republican administrations. However, this policy was always criticized from different positions of the U.S. power elite,” said Cuban political analyst and diplomat Carlos Alzugaray.

In the past, several administrations sought a viable alternative for cooperation with Cuba, not only in economic issues, but also in national security issues, aspects which the U.S. governments focused on to see what these agreements had in store for them, without setting aside the main objective: to promote a regime change in Cuba.

Historian Ernesto Limia recalled a figure about whom “virtually no one talks about, Ricardo Zúñiga, who was here and since 2001 had written a document with other specialists where he explained how to move forward in the policy change.” Zúñiga, of Honduran origin, was the White House advisor for Latin American affairs during the Obama era.

“It is a change of approach rather than objective,” said Limia during the debate, who mentioned that the State Department official, Roberta Jacobson, on one occasion said that the U.S. government was “looking for how to work the Cuban middle for it to be responsible for subverting the values ​​of socialism in Cuba.”

Returning to the issue of national security, this has been at the center of the conflict for several years, although it was more important at the end of the Obama administration, who removed Cuba from the bottom of the foreign agenda and gave it greater relevance, commented Rafael Hernández, moderator of the panel and director of the magazine Temas.

“For the Americans, the cost-benefit analysis is very important, a parameter of thought and action that governs many sectors in the field of relations with Cuba, and I think it could also be applied to the field of security,” Alzugaray emphasized.

“I think that normalization cannot be seen as a perfect state which can be reached, if we see it as a process in which cooperation increases and conflicts diminish, Cuba’s objectives are achieved, which is to undermine the most aggressive positions and strengthen those that seek cooperation,” a maxim that was present in administrations preceding Obama’s as in the Clinton era, Alzugaray recalled.

The normalization process had several conditions, among which the interest of American businessmen to increase contacts with Cuba stands out; the pressure of security agencies to maintain cooperation, especially in the area of ​​drug trafficking, terrorism and human trafficking; and also the need to increase cultural and educational exchange between both countries.

“If today we look at what Obama did, we have to agree that he was on a right path to normalization,” Limia said in the panel, but not before acknowledging that he criticized the subversive part of the plan in the ideological sphere that Obama’s actions had at the time, according to the historian.

For Cuba, this stage of changes meant having a hopeful economic and social outlook, while at the political-economic level the increase in the will of foreign investment. “On the political-ideological level, it also showed us how many failures we had, it was a different challenge, a path that we also have to travel and face without fear,” added Limia.

Entering a different relationship with the United States brought cultural changes to Cuban society that left a mark, beyond the measures approved by the Obama administration, perfectly changeable as the Trump administration has proven, “but the path to follow was marked, both for those here and for those there,” concluded Limia.

“Is it possible to measure the deterioration?” was one of the questions raised by Rafael Hernández towards the end of the colloquium, which is in line with the current situation of diplomatic relations between both nations in recent years.

Among the influencing factors, Milagros Martínez emphasized the personality of current President Donald Trump, “a very arrogant man, obsessed with reelection and that’s also where the danger lies. At one point he proposed to erase all of Obama’s legacy, not only in Latin America and the Caribbean, but in many areas of domestic and international policies.”

Another of the factors highlighted by the researcher is the “rebirth” of the anti-Cuban lobby, which was neutralized by the previous administration, and which is currently in good health: “perhaps not very good, but it has good health,” warned Martínez.

“Today the support that Trump has is from a large part of the Cuban emigration of the 1990s, which is different from that of the 2000s,” clarified Ernesto Limia, groups that left Cuba under different precepts and perceptions of Cuban reality.

“What characterizes right now the position of the Cuban government in the face of growing hostility? Resistance with serenity,” that is the key to the policy that the Cuban government must follow, according to Milagros Martínez. “These nine months have to be taken advantage of and be more proactive” to incentivize the interests towards Cuba that still persist in sectors of U.S. society and the economy.

“We have wasted the opportunity for the United States academy to make more visible what is happening in Cuba, we are captives of social networks and we have to cultivate that thought of normalization, we have to promote more academic spaces, that also contributes,” concluded Martínez.

“As before, the scenario of relations between Cuba and the United States is here. We have to be smarter now to have an influence on the positive side of American society. We have to make some moves with Cuban emigration, we must ‘pass the ball’ to the side, move further in relations with our emigration, with less prejudice and more boldness and remember that many of our relatives and friends are there now,” said Limia at the close of the dialogue.