The meetings gave details on the possible contracts starting 2019 with 30 MLB teams. 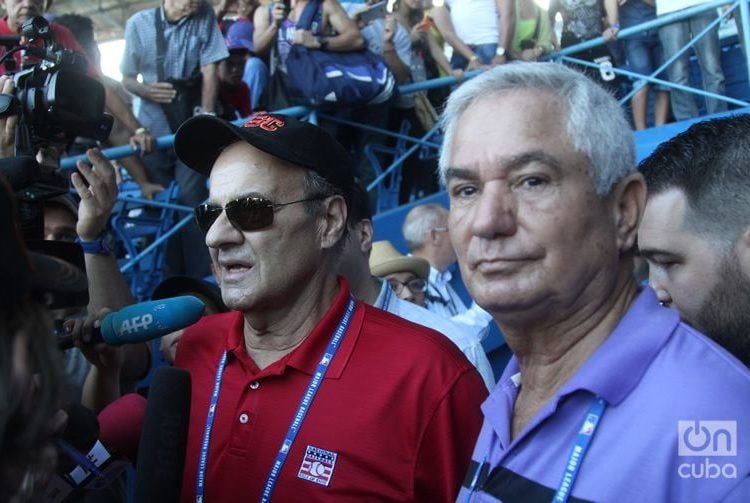 Joe Torre, director of sports operations for the MLB, and Higinio Vélez, president of the Cuban Baseball Federation, during a MLB clinic in Havana in December 2015. Photo: Roberto Ruiz.

The Cuban Baseball Federation (FCB) began holding meetings on December 28 with the players participating in the 58th National Series of the island’s national pastime to explain the content of the agreement it signed with the U.S. Major League Baseball (MLB) for the hiring of players from the Caribbean country.

The meetings, scheduled until December 29 in the cities of Havana, Santa Clara (center) and eastern Santiago de Cuba, also dealt with the characteristics of the contracts that Cuban players can have starting 2019 with 30 MLB teams, according to the FCB.

The head of the Federation, Higinio Vélez, headed the meetings “to clarify the doubts that the island’s main baseball players may have,” said the statement released last Thursday by the state media.

The main purpose of the agreement between the FCB and MLB, signed last December 19 in Havana after three years of negotiation, is to provide a “safe” way for Cuban baseball players to play hired by MLB teams and return to the island, without losing residence in their country of origin.

In the last five years, Cuban players’ defection to a third country to opt for residency, a requirement to later be able to negotiate a contract with the professional leagues as a free agent, had its highest quota in 2015 with some 100 players.

Under this understanding, the Cuban Baseball Federation must release all hired players with at least 25 years of age and 6 or more years of experience in the island’s National Series, and additionally, it could free players who do not meet these requirements, who would be hired as amateurs in the Major Leagues.

The clauses of the agreement, in addition to regulating relations between the FCB, the MLB and the Cuban players, in general are similar to those established by the MLB with other foreign leagues such as the Nippon Professional Baseball (NPB); the Korean Baseball Organization (KBO) and the Chinese Professional Baseball League (CPBL).