Bruno Rodríguez Parrilla participated virtually in the session of the United Nations General Assembly for the commemoration of its 75th anniversary. 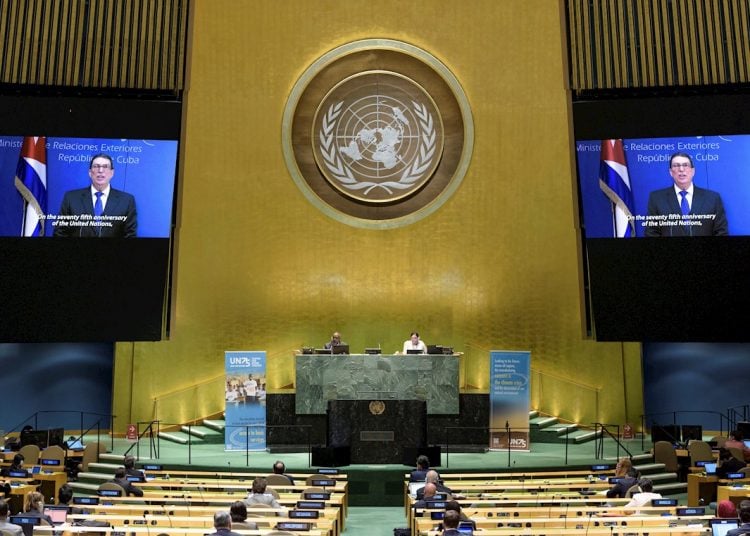 Cuban Foreign Minister Bruno Rodríguez Parrilla denounced this Monday the “irresponsible behavior” of the United States government. He said it during a virtual appearance in the special session of the United Nations General Assembly for the commemoration of its 75th anniversary.

“It is the greatest danger to international peace and security. It promotes conflicts, unconventional and commercial wars and imposes severe unilateral coercive measures and squanders, in its arms race, essential resources for the sustainable development of our peoples,” said the Cuban minister.

He also pointed out that Washington refuses to cooperate in confronting the multiple crises generated by the COVID-19 pandemic and does not recognize important agreements on the environment, disarmament and arms control, while leaving international forums such as the World Health Organization (WHO), UNESCO and the Human Rights Council.

“It would seem that it is at war with the planet, its vital resources and its inhabitants,” he added in his appearance from Havana.

Rodríguez also denounced that the current U.S. administration has increased its hostility against Cuba to “qualitatively superior” levels, as well as intensifying its economic, commercial and financial blockade and attacking the island’s medical cooperation and the governments that request it.

“It interferes in the internal affairs of dozens of UN member states and threatens those it accuses of influencing its corrupt electoral system. Fear and repeated lies are the new weapons in its dishonest media and disinformation strategy,” he said.

The attack by the head of the Caribbean island’s diplomacy against its northern neighbor also included a criticism of its actions in the Israeli-Palestinian conflict, which in his opinion prevents a “broad, just and lasting” solution, as historically claimed by the UN, and instead proposes the so-called “Deal of the century.”

At the same time, he reaffirmed the Caribbean country’s commitment to the principles of international law and the strengthening of multilateralism, cooperation with international organizations and the empowerment of this UN General Assembly.

Cuba’s participation in the high-level segment of the 75th session of the General Assembly foresees a speech this Tuesday by President Miguel Díaz-Canel.

For the first time in its history, the sessions of the Assembly, which will last until September 29, will be held virtually, without the presence in New York of high dignitaries and delegations, due to the health crisis caused by the COVID pandemic.