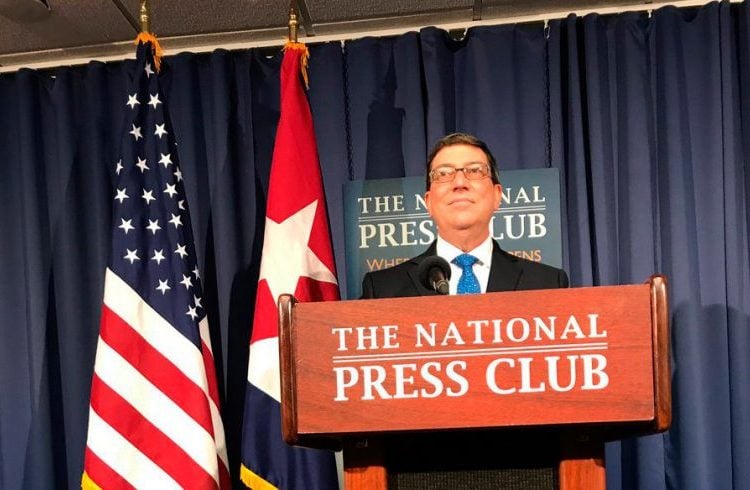 “No attack has occurred, no deliberate act has occurred, no specific incident has occurred. If the U.S. government says the contrary, I invite it to present evidence,” Cuban Foreign Minister Bruno Rodríguez categorically said yesterday in Washington’s National Press Club.

In a press conference, the Cuban foreign minister affirmed that “the possibility can absolutely be excluded that someone carried out deliberate acts” against the diplomatic personnel accredited in Cuba or their relatives.

“The Cuban government has absolutely no responsibility in the events alleged by the U.S. authorities,” he insisted.

“I can conclusively affirm that those effects on health referred to cannot be due to a single origin or a single event, it has not been corroborated when they occurred, it has not been possible to know the series of clinical tests that have led to diagnoses, nor has the U.S. government shared with Cuba the names of the persons who allegedly have been victims of these incidents, which, I repeat, have not occurred,” he denounced.

The Cuban official, who said he had had “a profitable meeting” with more than a dozen U.S. senators and congresspeople, assured that “it is scientifically proven that it is impossible that a cause can explain the diversity of medical symptoms presented by these diplomats and relatives.”

He revealed that the FBI has carried out “four periods of investigation in Cuba and until now it has not presented any evidence.” The foreign minister, as well as other Cuban authorities, has insisted that Cuba is willing to “work jointly to reach the whole truth.”

“Whoever affirms there have been attacks is deliberately lying,” he stated. “And I confirm that these health hazards are being used as political pretexts” to harm bilateral relations.

“The U.S. government should stop politicizing this matter,” said the foreign minister, since otherwise “an escalade” can be unleashed that “further rolls back” bilateral relations, “with detrimental consequences for both peoples and countries.”

He reiterated, as each time he has referred to the issue in public, that the Cuban government “is fully willing to continue the respectful dialogue…and is committed to concluding the investigation to clarify the events.” 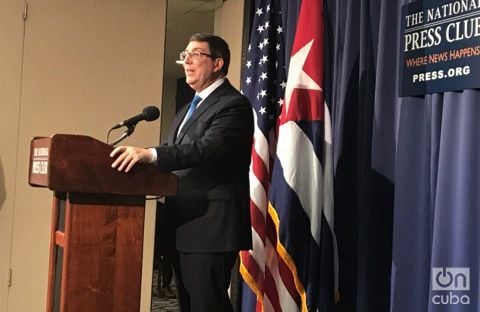 The U.S. change of policy toward Cuba has already had concrete effects. Rodríguez mentioned the interruption of a technical meeting on agriculture. “Cultural, sports, and student events and trips by dozens of student groups have been canceled,” he said.

Furthermore, he criticized the “reiterated disrespectful statements against Cuba,” proper of the period previous to December 17, 2014, when the discourse between the governments was conciliatory and tended toward rapprochement.

“I haven’t said there is a crisis, but there is an extensive rollback in bilateral relations,” he said.

“One would have to ask what is the objective of the U.S. administration in strengthening the blockade and restricting relations with Cuba, when it is well-known that in U.S. society in general more than two-thirds of the persons support the normalization between both countries just like most of the Cubans who live in this country.”

“Cultural, sports, and student events and trips by dozens of student groups have been canceled.” Photo: Tahimi Arboleya.

The foreign minister noted that despite the fact that it is “a very sensitive issue,” the U.S. government took four months to send its investigation agencies to Cuba.

In relation to the Cuban side, he commented some of the concrete measures that have been taken:

To carry out studies

To apply additional protection measures to the residences

To apply specific protection measures in the places visited by the U.S. personnel

Why were we given technically manipulated audio samples that don’t meet international standards?

Why haven’t the Cuban specialists had access to the affected persons?

Why have the medical personnel that have participated in this investigation not been able to hold exchanges with the U.S. physicians?

Why are anonymous sources always used?

On the other hand Canada…

Referring to the Canadian diplomats who have also referred health problems, the Cuban minister said that “a productive cooperation is underway between both governments and between the specialized agencies in question. We are fully willing to continue with them.”

“You will have noticed,” he added, “the radical difference that exists between the rash, unfounded affirmations made without thinking about the alleged attacks or deliberate acts that the U.S. spokespersons make compared to the Canadian government.”

According to the Cuban foreign minister, bilateral relations between Cuba and Canada “are still very satisfactory”; and he mentioned that Canadians “continue traveling en mass to Cuba as tourists, enjoying the freedom to visit our island, particularly during their harsh winter,” and that “all the cooperation with this country in relation to these health issues” will continue.