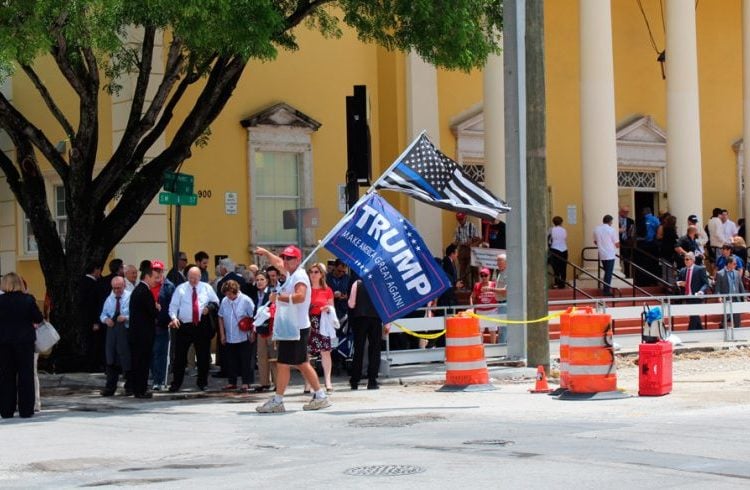 “The Cuban government reiterates its willingness to continue respectful dialogue and cooperation on issues of mutual interest, as well as the negotiation of pending bilateral issues with the United States Government.” This is confirmed by a statement from the Cuban government broadcast simultaneously in all state media, in response to announcements made today in Miami by US President Donald Trump.
The last two years have shown that the two countries “can cooperate and coexist civilly” despite “the great differences”; But, “adds the document,” it should not be expected that for this purpose Cuba will make concessions inherent to its sovereignty and independence, nor will it accept conditions of any kind. “
The text summarizes the official reaction to Trump’s speech, which is described as “loaded with hostile rhetoric that recalled the times of open confrontation with our country” and “reverses progress achieved” since  December 17th 2014.
They criticize the signing by Trump of a “Presidential Memorandum on National Security on Strengthening US Policy towards Cuba,” which provides for the elimination of educational exchanges “people to people” on an individual basis and greater oversight of travelers “As well as the prohibition of the economic, commercial and financial transactions of US companies with Cuban companies linked to the Revolutionary Armed Forces and intelligence and security services, all with the aim of depriving us of income,” he added in the declaration.
Trump also repealed the Presidential Policy Directive “Normalization of relations between the United States and Cuba,” issued by Barack Obama on October 14, 2016, and which at the time Cuban authorities considered “interfering”, but which laid the groundwork to continue a relationship of mutual respect and progressive evolution of the rapprochement between the two countries.
Given that the current US administration is arguing the violation of human rights in Cuba, the Cuban government’s response refers to this as “alleged concerns”. “The Government of Cuba rejects manipulation for political purposes and double standards in the treatment of human rights,” said the document.
They mention instead violations of human rights that take place in the United States. ” murders, brutality and police abuses, exploitation of child labor and racial discrimination,” he says. They also refer to a health reform that would leave 23 million people without health insurance, wage inequality between men and women; marginalization of immigrants and refugees, and international commitments to tackle climate change are unknown. The arbitrary arrests of dozens of prisoners at the Guantánamo Naval Base in Cuba, a territory still illegally occupied by the United States, are again denounced. They also mention the incursion into conflicts in the Middle East.
It is alluded to, as has been done on previous occasions, that the American President is “again badly advised”.
This has been the restrained response hours after the statements of the President of the United States, but anticipates that “subsequently” will do “a deeper analysis of the scope and implications of this announcement.”
The statement ends by ensuring that the necessary changes in Cuba “will continue to be decided sovereignly by the Cuban people.”
Previous Post