Recently, the United States Immigration and Citizenship Service (USCIS) canceled Parole programs for Haitians and Filipinos, which were similar to the Cubans’. 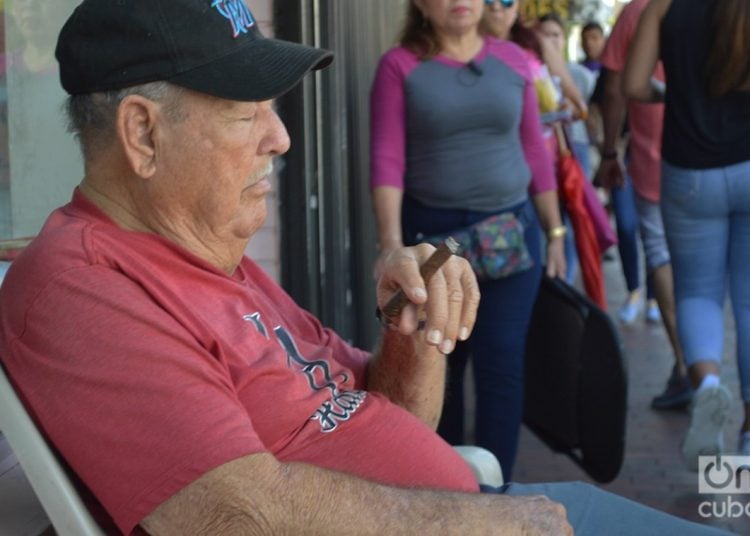 A Cuban smokes a cigar and dozes in front of his business on Calle Ocho. Photo: Marita Pérez Díaz.

The Cuban Family Reunification Program (CFRP, also called Parole), detained since 2017 because of the partial closure of the U.S. embassy in Havana, is currently “under review,” according to the USCIS.

After the recent cancelation of the Parole programs for Haitians and Filipinos, similar to Cubans’, USCIS explained that it will apply changes to exercise its limited authority so as to preserve the integrity of the immigration system and not encourage foreigners to enter the United States illegally.

Maria Elena Upson, an official at the USCIS Public Affairs Office, confirmed to OnCuba that “all remaining parole programs by category remain under review.”

However, Upson avoided commenting on alternatives to a resumption of processes for Cubans or their total closure.

A note from USCIS explained that the decision responds to an extensive review to better ensure that the authority to grant temporary residence permits under the Immigration and Nationality Act is exercised according to each individual case when there is a significant public benefit or urgent humanitarian reasons.

Both the Haitian and Filipino programs―like the Cuban one―grant temporary residence permits by category, and people who have approved family-based immigrant petitions have been authorized to enter and work in the United States while waiting for their green card.

USCIS acting director, Ken Cuccinelli, said that under these temporary residence permit programs by category, people have been able to skip their turn on the line and evade the appropriate channels established by Congress, adding that with the cancellation of these programs, these people will no longer be allowed to wait in the United States until their green card is available, which is consistent with the rules that apply to the rest of the world.

With the uncertainty in crescendo, in recent months several Cubans chose to give up the parole and begin another type of more universal family reunification process, where the visa categories have waiting times assigned.

For example, to “claim” a single child, the duration may be less than one year, but to apply for an immigrant visa for another type of relative may take longer, even a decade.

That is why thousands of Cubans cling to the possibility of a resumption of the parole program for Cubans as an easy way to reunify with their dear ones, although so far they haven’t received a reply.

On Twitter the claims to U.S. senators, congresspersons and politicians continue with the #ContinueCubanCFRP tag.

The majority of Cubans who are making claims on social networks complain to officials that they paid all the taxes and documentation required for their cases, although two years after the process is closed, passports and other official documents could expire.

“Touch the heart of our politicians. We need our children,” wrote user Tamara on Twitter, while she tagged Republicans Mario Díaz-Balart and Marco Rubio of Florida and Lizzie Fletcher of Texas.

Although in May the Assistant Secretary of State for Western Hemisphere Affairs Kimberly Breier (who just resigned on August 7) ​​asked for “patience” on Twitter before the claims of the Cubans and used the same tag, so far no official reply has been given on the resumption of the program or the preparation of an alternative location to Havana.

.@StateDept is processing approved immigration petitions for Cubans in Guyana. We acknowledge that there is a long wait for approved CFRP cases and thank you for your patience and flexibility as we process petitions out of this alternate location. #ContinueCubanCFRP

“20 months is not enough to find a feasible option?” Florida’s Cubans publicly ask their political representatives.

In addition, although supposedly the new laws in the United States do not apply retroactively, the question of what could happen with cases already initiated and paid creates even more uncertainty among this group of Cubans.

In that sense, the USCIS said that it will process all the pending cases until their completion, without clarifying how it would do it with the Cubans.

During election time, we still have to wait for the assessment the USCIS is currently making on the Cuban parole program and the response of Cuban-American politicians on the issue.

Is the Cuban Parole being canceled?

Miami-based immigration lawyer Yosmani Bazán answered some of OnCuba’s questions on the issue of the Parole program for Cubans.

“The possibility of modification and even definitive elimination always exists for the different migration programs and policies,” said Bazán, questioned about the possibility of a possible cancellation of the Cuban Family Reunification Program (CFRP).

The lawyer recalled the “wet foot/dry foot” policy, repealed by President Obama at the end of his term, as an example of the aforementioned. However, he said that he does not particularly see that in the case of the Parole “this will happen in the short or medium term.”

“Beyond the immigration situation there is a political nuance that has kept programs in force that apply only to Cubans,” he explained. “There are still thousands of Cubans arriving daily at the borders with the United States with the hope of convincing a judge of their ‘credible fear’ of returning to Cuba and thus manage to remain in the country for at least a year and a day and become eligible to adjust their immigration status under the Cuban Adjustment Act.

“The repeal of the CFRP would increasingly intensify this flow of Cubans to the border, who in this circumstance would have a more solid argument to be admitted under ‘credible fear.’ For example, someone might say that he was in a program (CFRP) to emigrate definitively to the United States, which was canceled and was now in a work limbo in Cuba.”

What happens to cases that have already been paid and have been under process (although detained since 2017) for several years? Would the total cancellation of the program affect them?

An applicant’s waiting time for an American visa varies depending on the visa category: a resident father or mother asking for his unmarried 21-year-old son would be the F2B, an American citizen brother or sister asking for his brother or sister in Cuba would be the F4, to name a few examples. Those included in these categories under the Cuban Parole program would come to the U.S. supposedly to wait here for their visa to be available and I say supposedly because due to the existence of the Cuban Adjustment Act they would only wait one year and be eligible to adjust their status.

Then, visa categories would not be affected because eventually they would come to the United States when their visa category becomes available. But the CFRP goes beyond the invitation to a family member who completed an application with USCIS; those applicants whose, for example, father or mother was claimed by an American citizen brother and in their interview they extended the parole status for their married children over 21 years of age and these were pending an interview are also considered participants.

We must recall that until this program was stopped, you went to an interview at the U.S. embassy in Havana “requested” by your brother who is an American citizen and you could extend a parole to your immediate family, say minors, or those over 21 years, married or unmarried, with children and/or without children…for which you would not be able to apply for a petition of these relatives until you became a U.S. citizen.

Is there any other means Cubans are using to reunite with their families, even though the Parole program has stopped?

Each case is different and I refer you to the previous answer where we talk about visa categories. We would have to study in each specific case whether or not to give up the CFRP, factors to consider would be your priority date with respect to the current date in the current visa bulletin, which is published periodically.

What would be the most affected or slower types of cases in these processes?

All applicants would be affected, as is logical. However, I believe that those most affected would be the brothers of American citizens who would have to wait 14 years to have a visa available. In other words, the brother who is 50 years old today would probably arrive in the United States when he is 64 years old.

Cuba concerned that violence in U.S. is due to Trump’s “hate discourse”

Private workers "must have profits, but without exaggerating"