U.S. official Kimberly Breier affirmed on Twitter that the immigration petitions are being processed and asked for "patience" for Parole cases. 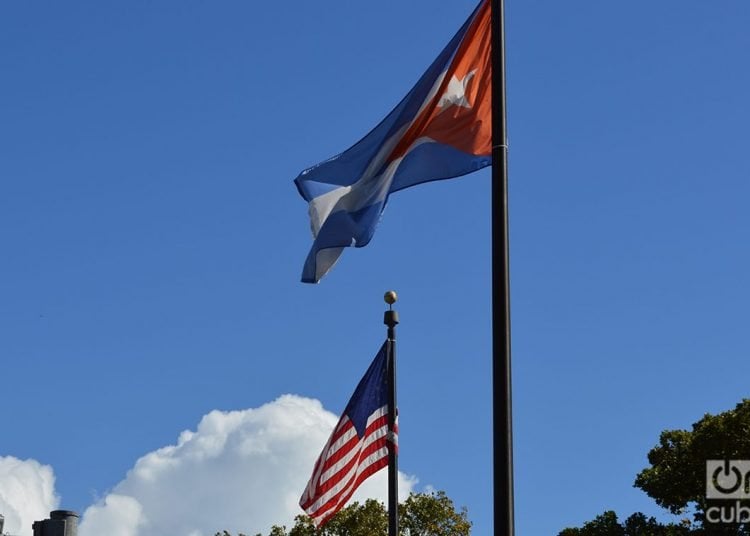 Assistant Secretary of State for Western Hemisphere Affairs Kimberly Breier this Wednesday published a tweet asking Cubans for “patience” for those affected by the halt in the Cuban Family Reunification Parole (CFRP) Program more than 20 months ago.

Breier wrote that the State Department is processing approved immigration petitions for Cubans in Guyana and that they recognize that there is a long wait for approved cases of CFRP, that they appreciate their patience and flexibility as they process requests outside this alternative location.

The U.S. Embassy in Havana echoed the comment, one of the few publicly received regarding the claims from Cubans affected by the halt of the parole program.

Thousands of Cuban residents (and even U.S. citizen) entered the Parole program to claim their relatives in Cuba, with the aim of expediting a process that can take years for people from other countries and for Cubans with that facility could take months or a little over a year.

However, in 2017 the United States decided to stop issuing visas in Havana due to the alleged “acoustic attacks” and the parole program was not taken over by any close embassy.

With the English label #ContinueCubanCFRP, hundreds of those affected are sending their complaints on Twitter, directly to Trump, the State Department, as well as Florida’s local politicians, Marco Rubio and Mario Díaz-Balart, among others.

There are thousands of stories of parents, children, siblings and family in general separated by 90 miles, who suddenly saw how an expedited process of family reunification, as well as the possibility of receiving them in the United States temporarily with nonimmigrant visas, was halted.

All this, together with the difficulties in processing Cuban passports from the United States and the costly process, makes family trips to the island cumbersome.

With that process, it may be years before they meet again, aggravated even more if the person residing in the United States defected from an internationalist mission and is denied entry for eight years.

These are testimonies that some Cubans shared with OnCuba about the current situation with the family reunification parole program, which was halted more than 20 months ago by the U.S. government.

“We are claiming my son (legally of age, married and with children). We were chosen by the USCIS to participate in this process because we are American citizens. Almost immediately we delivered all the documentation where $1,800.00, $360.00 was paid for each one. The 5 of them already have their approved Parole and when the Embassy in Cuba was closed the first time they were waiting for the appointment for the interview. My name is and we are willing to support so that this problem that affects so many Cuban families has a solution.” Alberto Capiro and Ana D Won

“I left the parole open to my mom since 2012. They gave her an interview for 2019, she’s been waiting for 7 years and now the paroles have stopped. Please make an arrangement with this situation. There are many of us who need to have our family together and we are not to blame for the problems not related to us.” Yilán del Cristo

“This thing with the parole is an INJUSTICE, we have made everything legal and we want and need answers, we have legally claimed our relatives and not even doing things rights this works. Let the world, the senators and all those involved in this injustice know that we are human beings and we are playing with the futures and lives of all these people who only want to reunite with our loved ones.” Gretel

“I left Cuba on March 26, 2015. The interview at the interest section was on January 22, 2015 that same year. Already with all the papers ready, the medical checkup paid 400.00 dollars for each one. And we were my three children and I. They were 14, 15 and the older one was a bit over 22 years and he was taken out of the Embassy. They did not allow him an interview. We came under parole, since my sister is a U.S. citizen and she claimed me. I’m going to be 4 years in this country and separated from my oldest son, the only thing I have left there. Because we are all here, my parents, my younger children and my sister with her family. Imagine how we feel.” Amelia Romero

There are basically two main alternatives for family reunification from the United States: the Cuban parole program (CFRP) and immigrant visas.

The latter are the same visas that any person from any country could request, while the parole is a special program that supposedly speeded up the process for Cubans, before it was halted in 2017.

The differences between one and the other are several, from the forms that must be filled out, prices, to the migratory situation with which the relative arrives in the United States.

In the case of the parole, Cubans arrive without residence (which they can request a year and a day under the Cuban Adjustment Act) and applicants are entitled to receive government assistance, such as food stamps and Medicaid.

With the immigrant visa, the person arrives with residence and does not receive aid, as it is a visa “sponsored” by a family member who can assume their expenses.

Now, the amount of differences between one case and another can be immense. For example, immigrant visa categories depend on whether the relative is close (children, parent, spouse), whether the person claiming is a U.S. citizen or just a resident, etc.

Luly Hernández, administrator of a Facebook group with more than 14,000 members focused on family reunification, explains that the “Parole” cases are “completely halted, without being processed anywhere else.”

In her particular case, when she claimed her daughter and gave her a “priority date” there was a waiting time of 7 years in her category, the F2B for single children. However, that category has been “progressing” quickly in recent months and she would have less than a year to complete her daughter’s procedures.

In any case, it is impossible to predict the time that immigration procedures can take, because they also depend on the visa fees or the number of people waiting, explains Hernández.

“This is why I am going to give up the parole I had asked for, even if I lose the money, because the important thing is to reunite with my daughter,” said Hernández.

But the same does not happen with other categories of relatives, whose waiting time may exceed a decade to complete the process.

Although she does not recommend anyone to give up the parole, it is the only solution she finds for her personal case.

Cubans with family members who are claimed are then required to review a monthly visa bulletin that the State Department publishes and which indicates an approximate “priority date” that is being addressed at the time.

They also depend on a concrete response from U.S. politicians and officials about the resumption of parole cases, either in Cuba or in any other U.S. embassy, ​​concluded Hernández.